I’m so over the Selfie.  At least, I was last year.  The minute anything becomes this popular I tend to lose interest.  That said, this week two Selfies caught my attention and I cannot just ignore them.

At the risk of sounding like an antiquated, backward, old ninny, I have to say: “What is this world coming to?”

The first selfie to hit my Tweet Deck this week was this shot taken by an intrepid passenger aboard the Singapore Airlines A380 from London to Singapore this week which was forced to make an emergency landing in Baku because of cabin depressurisation. 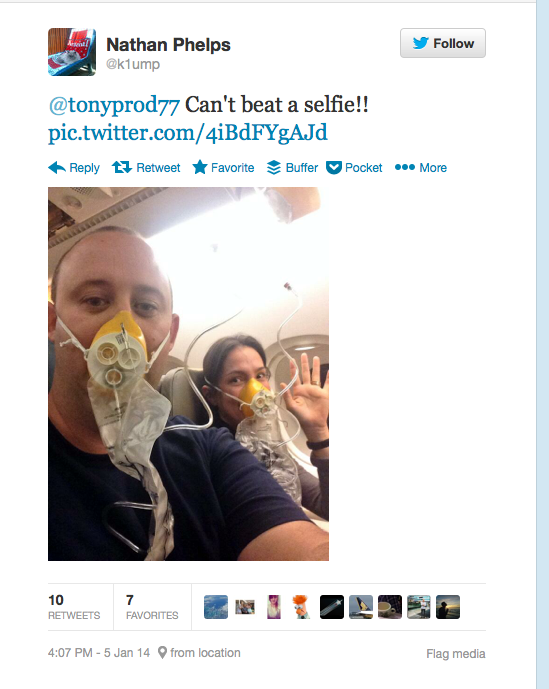 I thought it was a curiosity, at first.  Yes, there was a loss of cabin pressure and that is always a concern, but the passengers had managed to properly don their oxygen masks.  The little wave from the female passenger featured in the picture caught my eye.  She seems at ease with the situation.

Nathan Phelps, the man who took the Selfie, says in another tweet, where he features a shot of fellow passengers, that it was: “The moment when I thought it was all over!”  Yet he maintained the presence of mind to photo-document what he thought were his final moments.  Judge what you will from that.

The crew obviously handled the situation well, as all the passengers landed safely in Baku.  They were forced to spend some uncomfortable hours waiting at the airport (because Visa complications made it impossible for the airline to accommodate them at a local hotel) but, on the whole, they came out of the experience unscathed.  Singapore despatched a replacement A380 to take the passengers onwards to their destination.

What went wrong with the A380, and what exactly caused the seal breach which led to the depressurisation requires further analysis.  The industry reports I’ve seen thus far are partial, and require verification.  I don’t want to reach any conclusions without more data.  It needs study as this is not the only reported case of door seal breaches on this aircraft model.  It’s something I’m looking into.  Airbus provides detailed instructions to cabin crew on how to deal with these contingencies.

So the passengers were safe, and transferred without further incident to their destination.  The aircraft in question is under investigation, but overall a good result.  Other than a new standard for Selfie, and the real aviation research that needs to happen in order to understand the technical root causes of the incident, there’s not much news here.

Last night, just when I thought it was safe to go back to Twitter and follow ordinary aviation news again, I ran into this tweet from@tohom_fr: 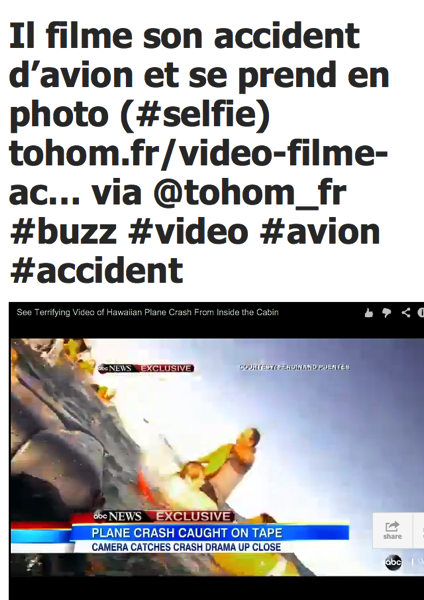 “He films his plane accident and takes a photo.”  Tweet by @tohom_fr.

How could I not take note of that?  Who finds time to record a ditching in this manner? 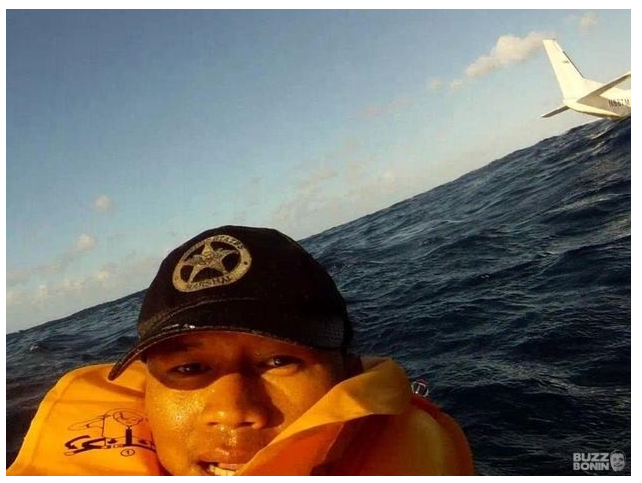 Ferdinand Puentes one-upped Nathan Phelps by not only taking a Selfie but also recording the entire ditching which he shared exclusively with ABC News and, through them, with the world.

When self-promotion overcomes the urge for self-preservation, it’s a worry.

Though a ditching is rare in large commercial aircraft, the risks are higher in small aircraft like the one in which this passenger was flying.  Ideal conditions like a sunny day in warm Hawaiian waters, when the pilot has done a nice job of landing you on the water so passengers could get out, make good subjects for videos like this one.  But more often than not ditching circumstances are too high a risk to life to stop and film the event.

We can learn a lot from watching this video on how people behave in the water.  Notice that not everyone had managed to don their life jacket properly or inflate it.  These passengers had time to adjust because of good weather conditions, and under relatively controlled crash circumstances.  For example, there were no fuel fires on the water, and no imminent threat of the aircraft exploding.  Passengers were able to hold on until they were rescued. Passengers credit pilot Clyde Kawasaki with excellent handling of the situation.  What isn’t getting as much press is that one passenger was killed shortly after landing in the water, for reasons which are still under investigation.  This was not an event without incident, to be recorded as a curiosity.  It was a serious aircraft event which led to the loss of human life.

Perhaps both these Cabin Selfie incidents are of some benefit to aviation.  They highlight the need to pay attention to cabin safety instructions.  They demonstrate how well trained crew are to deal with emergencies.  They generate public awareness of aviation safety.

But I have to wonder whether we’ll have to update Cabin Safety Procedures.

In the case of an actual emergency, place the oxygen mask on yourself then assist those around you, THEN take a snapshot for your friends.  In the case of an aircraft ditching, properly don the lifejacket supplied in your seat, ensure you safely exit the cabin, assist other passengers in the water, THEN film the entire event for posterity.