Skip to Content
Home Aviation Safety Buckle your seatbelt Will PAX Pay for Comfort or Should Comfort be Free?

Marisa Garcia 1 Comment on Will PAX Pay for Comfort or Should Comfort be Free?

While that might be true, it did raise the question: Doesn’t everybody?

Yes.  And, clearly no.  If everyone did, and the revenue dollars were there, airlines around the world would be making their cabins more comfortable.  To the contrary, many are specifying tighter, more cramped, LOPA configurations.

Still, what level of comfort passengers are willing to pay for deserves a closer look.

The preferences of the Asian market are nicely illustrated in this infographic which Airbus supplied: 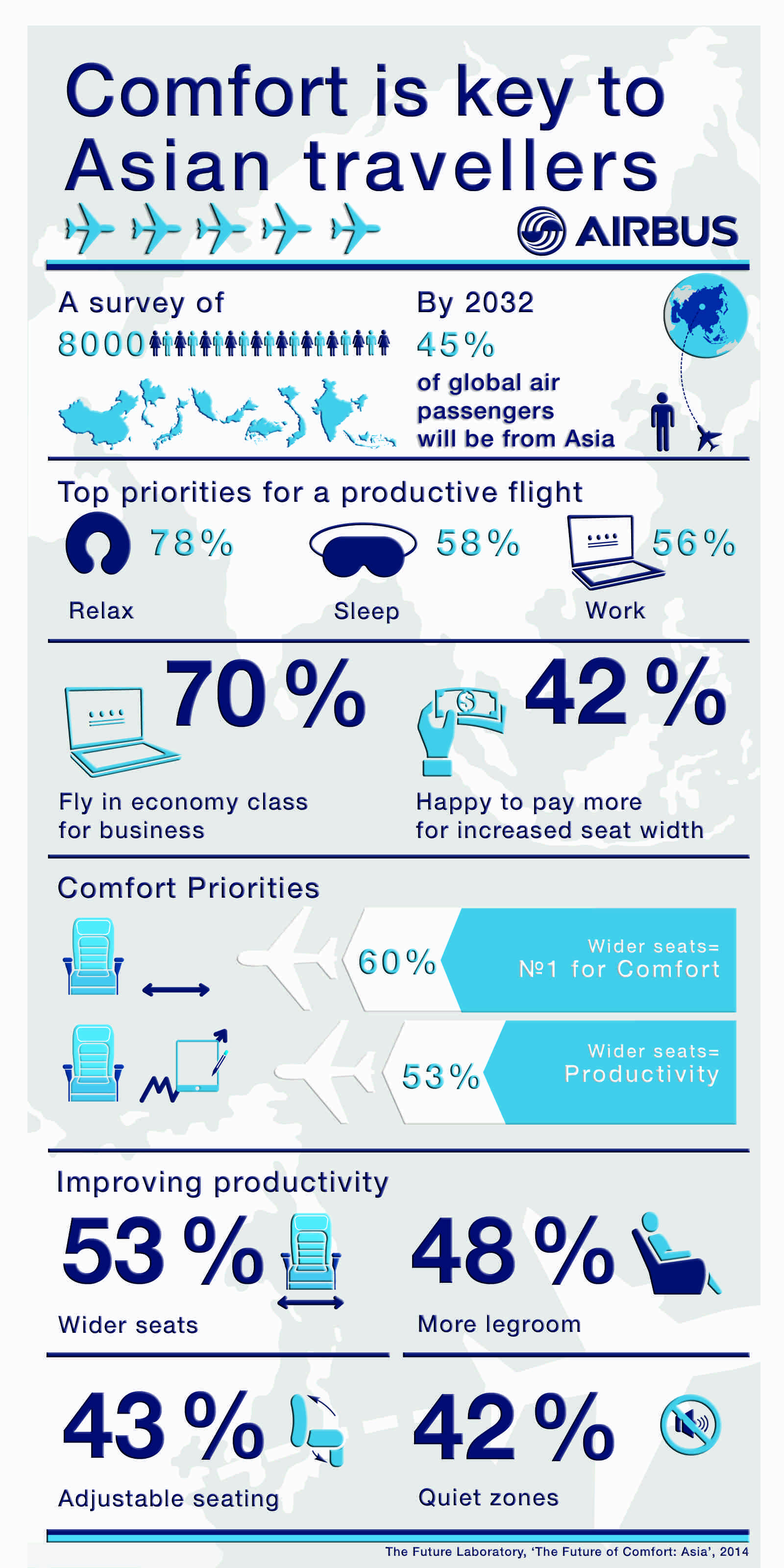 Notice that while 70% of passengers surveyed (8,000 in all) indicated that they fly in economy class for business, only 42% said they were happy to pay more for increased seat width.  That leaves just under 30% of passengers travelling in economy who will not pay more for it.  That those same passengers choose economy class for business travel demonstrates that there is some price-sensitivity in the market, otherwise the aircraft would be overrun with business class seats.  (NOTE: Qatar has announced that they are configuring some aircraft with full business class seating, which is a very interesting turn of events.)

Even though the scales on the Airbus infographic appear to reflect promising figures for Asian passengers paying for comfort, it is not by a wide margin.

Nor is this 8,000 passengers a truly representative sample of a market consisting of hundreds of millions of passengers.  (IATA projects that by 2016, passenger numbers in China will reach 415 million and in Japan 93.2 million.)

That said, recent new interiors programs in the Asia-Pacific region would appear to substantiate some of what Airbus says about the market.  Even some Asian Low-Cost Carriers are providing comfortable interiors unimaginable in Western markets.  (Flight Chic will be featuring a special report on this topic very soon!)

The question is whether, if we accept that this is true of Asia, it is true of the rest of the world.  Yes, everyone wants comfort, but will they pay for it?

Last year, Airbus released a separate report of “international” passenger preferences, indicating that 41% are willing to pay more for comfortable seating in economy.  Below is that infographic:

The  success of bare-bones Ultra-Low Cost and Low-Cost carriers around the world would seem to indicate that passengers just want cheap fares; even when they have to sacrifice everything else, even when the final costs with add-ons aren’t as cheap as the published prices.  (In fairness, even the rolled-up prices are lower than those charged by competing traditional carriers on most routes, so the passengers are saving money even with the “extras.”)

But Ultra-Low Cost and Low-Cost Carriers are improving their cabins; if not offering wider seats then offering some previously unheard of passenger comfort considerations.  Watch this space for more on that.

Without spoiling what I’ll present in a future article, I can say that trend is attributable to heavy competition.  All the players are trying to best their competitors for a bigger share of the market.  The generally positive finances of those carriers, and market conditions allow for it.  This is not an indication that passengers are willing to pay higher fares.  That theory is still to be tested.  I can’t imagine who will be the first brave ULCC or LCC to try.

So we’re left with the same question:  When it comes to actually buying the ticket, is it all about comfort for passengers?  Or, do low-fares prevail?

In my original post on this topic, The Financial Pinch of that Extra Inch, I made the argument that unless economic factors and market conditions prove otherwise, Airbus’ proposed 18″ (46cm) standard will be difficult to apply universally; even for long-haul flights.

Indeed, despite the digs at competitors Airbus makes in their reports (claiming that others make extra efforts to cram more seats into aircraft), Airbus themselves configure aircraft with seats as narrow as 17″.  This is not inconsistency on their part, merely response to customer demand.

If the airlines are demanding narrow and crammed seats, it is because they find it financially advantageous to do so. If they were to lose passengers, resulting in decreasing load factors, they would quickly change tack.

In that same post, I pointed out that the primary problem with calling an 18″ standard a “standard” is that, in aviation, there is no standard without regulation.  That brings me to the core question nobody wants to ask: does this issue need to be regulated?

I can just feel the rotten tomatoes headed my way as I type this, but hear me out.

As I recently reported on the RunwayGirl Network, there are some serious safety concerns, not the least of which is egress in the event of an emergency under such cramped conditions.  (The UK CAA sponsored report I referenced in that article actually recommends a standard of 19.6″.  Cue the industry gasping in unison.)

The more I dig into this topic, the more distressing information I hear.  As I also reported on the Runway Girl Network, crash test dummies used for sled-testing of seats bear little resemblance to the people actually sitting on those seats and flying from day-to-day.  The damage to real people during a crash can be significant, resulting in severe injuries to the lower extremities, abdomen and lumbar regions.

These are not factors the industry should just shrug off, or sweep under the carpet.  Yet, that’s exactly what we’ve done.

The report sponsored by the CAA for the JAA, which highlights the need for further studies on evacuation conditions, was prepared in 2001.  To date, nothing has been done.  In their statement to me, the CAA indicated that this is only a comfort factor, and that the regulators do not address passenger comfort.  Repeated requests to explain this position, in light of facts, have yet to result in a reply.

After my articles, Mary Kirby of the RunwayGirl Network asked a very reasonable question: If Airbus wants to promote an 18″ standard, why don’t they also mention the safety advantage?

I asked Airbus this question and they answered, unequivocally, that this is not a safety matter.  As they pointed out, safety is a governed by the regulatory authorities.  If there were any safety concerns, it would be up to the authorities to change the regulations.  All seats equipped on Airbus aircraft, be they wide or narrow, meet the established safety standards.

They’re absolutely right.  So is Boeing.  So is everyone else.  The standards (the real standards on the books not the ones floating around as concepts) don’t require anything more than what we have today.

As Airbus points out, the 17″ standard dates back to the 50s.  As I’ve learned, most of the base measures used for the current testing date back as far as the 60s, the most recent measurements date back to the 70s.  It’s all out of date and not in keeping with our reality, but that’s just how it is.

Change for the better is not as simple as we’d like, and that’s the truth.

The regulations and standards governing aircraft seating reference Department of Transportation accepted measures, in place for the automotive industry, as their foundation.  Without changes to those basic standards in the automotive sector, there is no methodology for the regulators in aviation to push change.

Besides, there is no motivation to do so.  To the contrary, there is imminent threat of the industry imploding if changes are made too abruptly.

Think about it.  Any formal regulatory change to these standards would require a retrofit of most of world’s fleet.  It is not just cost-prohibitive, it would be utterly devastating.

I’m not surprised that the 2001 report was forgotten.  With the 9/11 attacks, the industry had greater things to worry about, and more imminent threats to address.  The resulting financial distress, which spread to every corner of the industry, meant that no one had the time, the patience or the inclination to consider this issue in depth.

It has been thirteen years, though.  So, how long should we put off the conversation?

There is an important precedent we must all remember which could help us address this predicament.  When the regulatory authorities announced their intent to change the regulations for aircraft seat testing standards from 9Gs to 16Gs (in the late 80s), the industry not only took notice–they took action.

Note that the regulatory authorities only initiated the process toward changing the regulations.  The regulations did not actually change until 2005.  During nearly twenty years, there was a lot of hemming and hawing, wringing of hands and gnashing of teeth, much of which I got to witness first hand.  Still, one by one, everyone fell in line, made their peace with it, and outfitted new aircraft accordingly.  By the time the regulation was on the books, everyone already complied.

One of the objections I remember hearing to the 16G requirement (which actually has merit when you think about it) was that, while the seats have to pass 16Gs, the tracks on which they are mounted do not; nor do a number of other interiors components just as likely to bash passengers as anything else when the aircraft is pitching and rolling around.

Still, the reasons for the change were sound.  Previous seats came apart during crashes in a manner which was terrifying.  It was a change for the better, everyone accepted it, and we’re flying safer today as a result.

It is possible that the issue of seat width (and seat pitch too) could be given a second look, and changed in this softly-softly manner; giving everyone a chance to adjust, making sure the market can take it.  We’ve done it before, we can do it again.  The 16G test did not affect aircraft capacity, so this is a much harder sell, but it’s something to think about.

Ironically, the biggest thing holding this up is that it doesn’t actually become an issue very often.  We have so few accidents, compared to any other form of transport, that there aren’t many cases of injury.

I’m doing a study of Asiana 214, which I’ll share with the industry very soon.  I dove head-first into dozens of NTSB reports, medical reports, pending law suits–the works.  I haven’t actually come up for air yet.

What I’ve learned so far leads me to believe that, while everyone is saying there is no safety issue right now, there may eventually be calls for a rethink.

I wouldn’t want to predict just when it will happen, but I do think it’s coming.