JAL has made a series of interesting announcements in recent days, which show that the airline is focused on improving its brand, its business model, and its weight in the oneworld alliance.

I recently reported on Skift that JAL was expanding its partnership with JetBlue, to add a number of critical flights and flight pairs to its service schedule; allowing JAL’s passengers to make connections to key tourist hubs which are not covered effectively by American Airlines, even after the recent merger with USAirways.

After announcements of improvements to cabins, introduction of many soft comfort features and the release of special menus, JAL revealed that it will open a fully revamped new Sakura Lounge at Haneda Airport. The Lounge areas were designed by award-winning designer Ryu Kosaka, Creative Director of A.N.D (Aoyrama Nomura Design) who has designed interiors, gathering areas, lounges, bars, and restaurants for a number of iconic buildings, residences and hotels including the Mandarin Oriental, Tokyo; the Hyatt Regency, Osaka; and most recently the Palace Hotel, Wadakura.

And the Lounge areas are quite pretty. 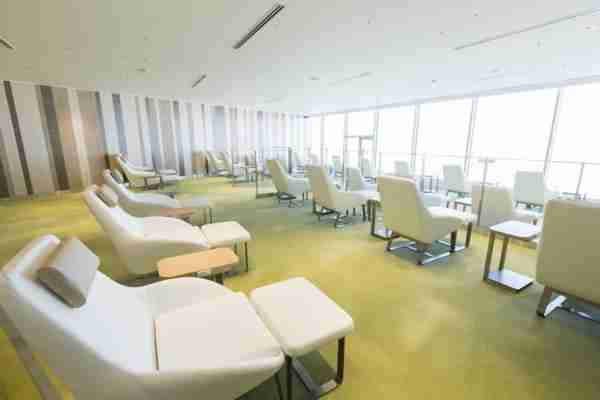 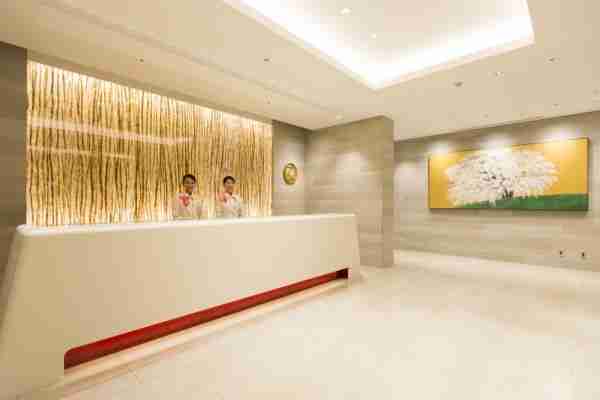 Entrance to Hall Lounge at Haneda, with happy smiling attendants at desk, image by JAL

JAL are not afraid to try some quirky promotions to bring passengers in to visit the terminal lounge.  For example, giving away nice Sakura Leaf soap sachets to passengers who visit the Lounge on opening day March 30, and having a limited-edition Temari sushi menu prepared by JAL BED-SKY AUBERGE from March 30 to April 14, 2014. 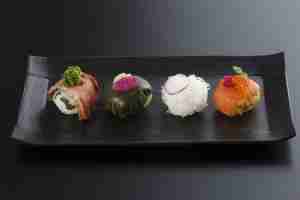 Get it your sushi before it’s gone, as only limited quantities will be available.  Image of Temari sushi by JAL 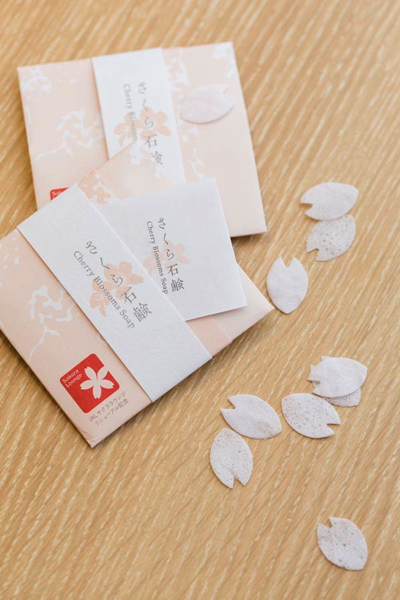 Really very nice looking Sakura leaf soap flakes, though you’d be sad to use them as then they’re gone and where will you be?  Image by JAL.

All nice, but then a very interesting thing happened.

Finnair announced that the Japanese government had formally approved its entry into the existing business partnership between JAL and British Airways to share routes and revenue on flights between Japan and Europe, starting April 1, 2014.  No.  It is not an April fools joke.  It is quite serious.  Three oneworld carriers move from just being collaborators in an alliance to actual business partners sharing revenue and cooperating on scheduling and pricing.  As Finnair states in its announcement, this business arrangement will provide the two carriers’ mutual customers “more flexible routing options and an attractive range of fares.”

If you remember my recent post on Finnair’s Cool New Blue, April 1 is also the day when Finnair will begin flying passengers from Tokyo and New York in those new fresh-decor cabins.

These joint business ventures, however, represent an evolution of alliance partnerships with interesting repercussions.  Are we talking future airline mergers which cross national boundaries and continental divides?   So far, the merger of American Airlines with USAirways, resulting in the “world’s largest” airline has been all the news.  If alliance partners go step-by-step further along the path of joint business collaboration, eventually that step will lead to the rise of a truly global airline.  More on this to come.

For the moment, let’s go back to JAL.

Yesterday’s JAL Group Medium Term Management Rolling Plan 2014 was an interesting read.  Here are some of the highlights:

JAL acknowledges that its financial years 2012 and 2013 reflect a period where its “ability to build..high-profitability was tested.”  The airline assures investors that  the financial year 2014 will be “a period of establishing a firm business foundation to achieve ‘growth’ in revenue and profit.”  Further, JAL projects that during financial years 2015-2016 it will: “achieve Management Target and start new growth.”

This is the set-up for a report on a series of measures JAL plans to undertake to ensure the airline’s long term stability.

As JAL puts it: “The JAL Group must humbly reflect and learn from its mistakes of the past.  While making well-thought-out plans, we had managed the company without sufficiently reviewing the progress or achievement level of our plans, or analysing or reviewing the results.”  JAL goes on to say that it has reviewed past performance and reviewed its policies to ensure that it can accomplish its targets in the remaining three years of its present turn-around plan.

The airline lists its goals as follows:

1. to enable JAL Group staff to reaffirm the direction we are heading for, and to understand our current positioning; and

2. to demonstrate to customers, shareholders and all stakeholders that the JAL Group intends to keep its promises.

JAL further specifies its policies as:

Pursue the material and intellectual growth of all our employees;

Deliver unparalleled service to our customers; and

Increase corporate value and contribute to the betterment of society.

To that end, JAL issued a separate announcement (yesterday) that it will expand there In-flight Internet Service on Southeast Asia Routes. 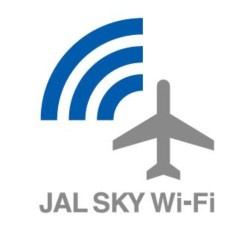 JAL will provide SKY Wi-Fi on international Boeing 767-300ERs, 777-200ERs and 787s.  The airline announced that it has reached an agreement with Panasonic “to aggressively install JAL SKY Wi-FI” on  these aircraft for Southeast Asia, and “other international routes.”  The SKY Wi-Fi is served by Panasonic’s eXConnect.  This system will be onboard the stated aircraft and routes this coming financial year, which consists of April 1, 2014 through March 31, 2015.

The service was already installed on international Boeing 777-300ERs flying to North America and Europe from July 2012.

JAL ultimately intends to expand  the SKY Wi-FI on the Boeing 767-300ERs, Boeing 777–200ERs, Boeing 787s flying to North America, Europe and long-distance Asia routes as well.  The expansion program will be complete, and service available on these extended routes, starting the end of its Financial Year 2014; that is after March 31, 2015.

These new pages present visitors to Japan with guides and information in an engaging manner.  As the airline puts it:

“Besides giving introductions on Japan’s seasons, cuisine, tradition and subculture in the ‘About Japan’ page, JAL has adopted a humorous tone using eye-catching illustration to describe Japan’s unique customs in a new part of the site named ‘HOW TSU JAPAN’.

On the “Omotenashi” portion of the site, JAL explains how it “delivers the spirit of Japanese hospitality to its customers in different aspects of its services.” 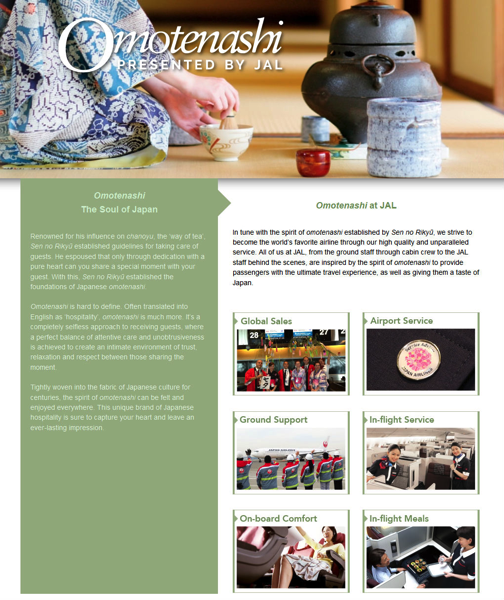 Its Japan guide site provides a wealth of tourist information, including a listing of events and festivals.  JAL has even incorporated a social aspect to the site by providing a “Suki!” button for website visitors to vote for their favourite spots.  As an interesting twist, which will surely increase the competition among tourist venues to perform well, JAL use the number of “Suki!” votes earned to rank the tourist spots listed, with those voted most popular appearing at the top of the page.

All of this activity is added to many previous announcements this year on improved service and product offerings, which include its ongoing  JAL SKY SUITE interiors programs, the most recent introductions of which were on JAL’s 777s flying from Tokyo(Narita) to Frankfurt, due to begin service on April 17 of this year.

Two nice business people retract the retractable privacy partition on their JAL Business Class SKY Suite, to share a toast which becomes the start of a long and beautiful, mutually rewarding, win-win friendship.   Image by JAL. 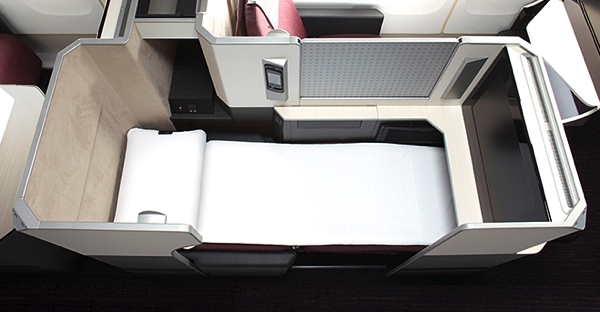 And we can only imagine what this pretty lady sitting in JAL’s SKY Suite Spacious Economy Class finds so funny on her IFE screen.  Image by JAL.

JAL is literally abuzz with activity, inside and out.

Yesterday, the airline announced that, to stabilise its domestic business, JAL and its wholly owned subsidiary JAL Express have agreed to integrate; pending approval by the Board of Directors during their upcoming meeting.  The merger will be effective October 1, 2014.  JEX will cease to exist, JAL will survive.

In what must have been preparation for this domestic agenda, JAL had already announced the introduction of JAL SKY NEXT enhanced domestic services starting May of this year.  These will go into effect for Domestic 777-200/300, 767-300/300ER, and 737-800s (for a total of 77 aircraft, according to the schedule at the time of the announcement this January 30).

This domestic service will  include Wi-Fi service powered by Gogo®; and select In-Flight entertainment streamed to passengers PED’s free of charge via wireless LAN, which will feature a sports channel, a gourmet channel, music channels, and anime; as well as a dedicated travel information channel called SKY RURUBU.

On SKY RURUBU passengers will be able to get travel and consumer coupons along with destination guides.

And, naturally, it includes a revamped interiors program which introduces leather seating throughout the cabin, with slimline seats in Economy.

A slimmed-down image of the slim-line seats with leather covers on domestic flights.  Image by JAL.

The Automotive leather-clad J Class seats on domestic flights will have a 97cm pitch.  Image by JAL 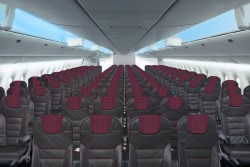 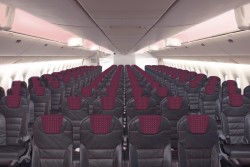 Pastel Cabin lighting on domestic flights with baby blue for daytime and girly pink for spring.  Images by JAL

Domestic First Class (available on some of the airline’s domestic Boeing 767-300ERs), shown here, will start its seasonal service this Autumn.  In all, this will be a total of 9 aircraft according to schedule plans at the time of the announcement.

I think I’ll let the numbers speak for themselves.

With present fuel costs, BELFs (Break-Even Load Factors) are running close to 80% on average; according to airlines.org.  It will be interesting to see whether all this buzz of activity and business realignment by JAL will result in improved Load-Factor numbers.

The airline specifically references “high fuel costs due to the weak yen” in the management plan released yesterday; stating that its revenue increased primarily in the international passenger market, and from cost-cutting measures.

It will take further business initiatives to support those profitability targets.  We are therefore likely to see more “New” from JAL in days to come.