One of the prevailing themes at this year’s Passenger Terminal Expo in Barcelona was the future of automated terminal processes through high-grade hardware and advanced software solutions; straight out of the eerily accurate visions of Phillip K. Dick.

In truth, the selling points for these innovations as PaxEx enhancements are strong.  They include reduced lines, faster access to gates, self-service, and various systems in place remembering who you are and what you need when you travel.

That seamless passenger experience, which springs eternal from the lips of industry future-trends experts, is an ideal landscape.

But those who dream of a smooth journey from home to destination and back home again, might have something else in mind than the tomorrow we’re rushing into today. 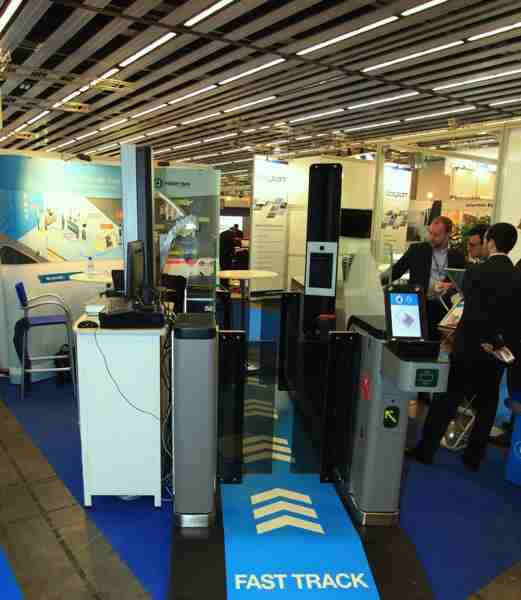 Data Mining, Identity Verification and Biometric Scans are on a Fast Track for aviation, but how fast is too fast?

Much of the square footage at the Passenger Terminal Expo was taken-up by companies offering hardware and software solutions to automate travel, with an emphasis on self-service.

Apps abounded.  QR Codes were ubiquitous.  Near Field Communication (NFC) was in vogue.

It was a veritable seamless PaxEx heaven.

Viewed as segmented presentations from the specialists in one system or another, it was appealing.  Everything indicates that aviation is eager to adopt new technology in this arena.

In order to understand the repercussions of all this advancement, one had to see the big picture.

The big picture was in a tiny box.

Tucked away in a relatively small booth (compared to the many other companies peddling function-specific hardware/software combinations), I found the Vision-Box® system which has an interesting tag-line: “Identify Your World.”

That tag line was enough to draw this writer closer for a peek.  Identify your world how?  To what end?

After an uncomfortable series of scans of my passport, and a failed attempt to capture an image of my irises, I was directed from the helpful representative at the booth to Jean-Francois Lennon, Director Global Business Development & Sales, who gave me his little box of a business card and took time to explain the complete system and its advantages.

The big selling point of Vision-Box® is not just the various scanner-loaded hardware stations (which can read your eyes, your fingerprints and, of course, your travel documents), but the advanced data management system which gathers and processes passenger document and biometric information, then tracks the passenger’s movements and activities at the terminal and beyond.

Put together, it’s a lot of data.

It allows governments to make sure that visitors gaining entry have permission to do so, and can also alert those governments when the Visa period has elapsed and the passenger has not been “scanned” out again.

Because the systems function by reconciling biometric data to identity documents at every stage, they can ensure that a person holding a particular passport is the same person who travelled elsewhere using said passport. 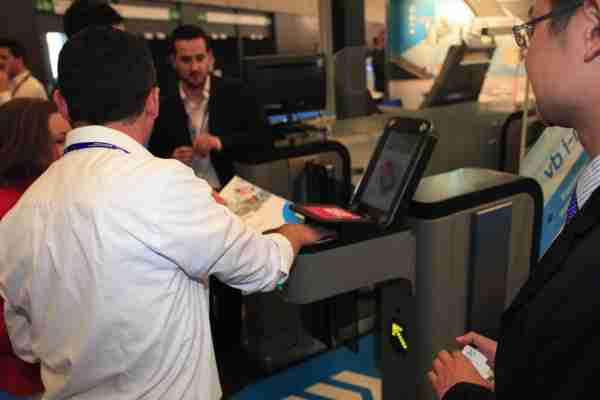 The Vision-Box® scanner’s failure to read my passport keeps me from getting through the gate.  Tech Support attempts to resolve the hiccup.

The system will store data on the particular passenger’s travel activity for one journey, which is then compiled for all journeys the passenger might take, building up a catalogue of their travel preferences and a comprehensive profile of the person.

The key product differentiator for Vision-Box® is that each of these ten key touch points reconciles biometric data gathered on the passenger to their activities at the terminal, ensuring the passenger is still the passenger previously identified.

It also gathers key readings from the passenger to gauge other behavioural factors.  This function belongs to the VB-SENTRYSPIDER system run on the CCTV element of the Vision-Box® ecosystem.  Vision-Box® calls it “intelligent surveillance.”

Lennon assures us that the masses of data gathered are selectively distributed; with key security information shared with governments, and information on other activities, like shopping, dining and recreation at the terminal distributed to interested vendors as anonymous data points.  Not that they are anonymous, but Lennon assured us the company will not distribute the identity aspect of that data to retailers and advertisers.

Systems offered by other players in this market, reveal a trend towards “personalisation” of that information too, and there is nothing to say that a company gathering so much useful data might not benefit from extending the full scope of their data-mining to third parties in future.

Of the 298 speakers at the Expo, not one of them represented a consumer protection agency.  No one was present to speak about the ethics of data mining, though there were many present to speak on the countless possibilities for use of the data mined from millions of passengers.

This particular mining effort is strangely akin to the Gold-Rush, with the same Wild-West “let’s just get there and take what we can” approach.

IATA is responsible for the standards which control these systems, and indeed Vision-Box® touts their status as an IATA Strategic Partner in their literature.

Lennon was at pains to assure me that Vision-Box® encapsulates the ideals of IATA’s 14-point Passenger Experience Structure.  A review of the specifics of that IATA structure confirms Lennon’s assertion.  IATA’s 14-points follow:

A complete Vision-Box® ecosystem covers most of these.  It could, in principle, be scaled-up to cover all of them.

Lennon indicates that the company’s focus is on deployment of the current systems, and on further developments and fine-tuning of their products for greater utility to the industry.

IATA has six key working groups dedicated to encouraging development of the 14-point systems.  None of the six working groups are tasked with analysing the implications of mining that data; nor what ethical standards, limitations or consumer protections should be put in place as these systems evolve and become an industry standard.

Where is this all headed?

The evolution of these systems, at present, is industry-driven.  The focus is entirely on the considerable security and monetary benefits of using this information.

As I spoke with Lennon, and other representatives of various companies involved in this frenzy of systems improvements (all of which involve some level of data-mining) the term Passenger Experience was used often; but the “Passenger” was always a remote third person.

There is a logical disconnect in this.  Those involved in the process of creating these systems are passengers too.  In fact, most are frequent flyers.  But the industry seems to have detached from that reality.

The benefits for passengers of all these developments are many.

There is the convenience of streaming right through the terminal onto the plane and back home again.

The enhanced security of these systems will deter scary people from doing terrible things which would make us all wary of traveling.  This function addresses a critical need.

The many little perks which some at the show teased us with, including customised discounts and offers for special events or duty-free shopping, will likely tempt many of us to just give it all away.

I was tempted, and I fell for it. 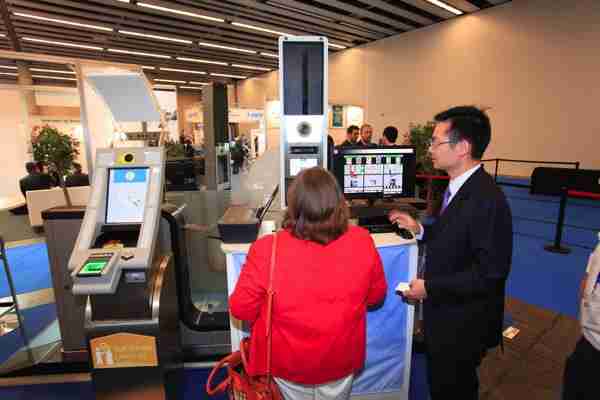 Progress slowed because I was too short for the iris scanner mounted on the show table to capture my irises.

All I got for the sensitive data I gave away at the Expo was an incomplete tour of the Vision-Box® ecosystem (elements of which are already deployed in several key airports around the globe) and a 10 Euro discount off World Duty Free Shopping at Barcelona Airport, sent to my inbox by a different company mining data to target retail habits–which I did not sign up for, ask for, or use.

It was when the folks at Vision-Box® asked me to scan my passport at the booth, that I realised the “Passenger” we were all talking about was not an anonymous third-party.

I realised that the dehumanised “Passenger” was me.

I was uncomfortable trusting an image of my passport to Vision-Box® (to anyone for that matter), and I needed repeated assurances that my passport scan and fingerprint would not be stored.

“Why would we want to store that information?” The nice Vision-Box® representative asked, to reassure me.  Why indeed?

It didn’t make me feel any more comfortable.  But I found myself scanning my passport despite myself.  I felt that making too much of a fuss put me a bit out-of-step with predominant wisdom, even unreasonably paranoid.  I told myself that I wasn’t giving anything away that wasn’t already out there in some database somewhere.

Besides, I just had to know how it worked.

That’s the thing about Pandora’s box–curiosity get us all in the end.

Featured Image: The little model of the complete Vision Box® system on display at their booth at the Passenger Terminal Expo 2014, Barcelona.