Last week, travelling to the Passenger Terminal Expo in Barcelona, I flew KLM.  The great bit is that I did not fly alone.  While I’m a short 5’ 1” (and a bit “zaftig” as some might say), my husband is a tall 6’4” of average build.  Together, we make quite an interesting pair of test subjects for cabin comfort.  This, and any future trips we take together, will be part of an ongoing series: the Big Bloke, Little Lady flight tests.

First, A Bit of the Random:

I found KLM’s strategy of welcoming us onboard with their sick-bags funny.  Good Dutch Humour, I suppose.

We booked on the KLM website, nice UX, easy to follow.  Fares were definitely a deciding factor in choice of airlines, though schedule also impacted our decision.  We wanted to get to Barcelona early, to make the most of Monday, and KLM could get us there by 10:15.  Likewise, we wanted to return home at a decent hour.

KLM surprised us by applying a Low-Cost unbundled billing strategy to luggage and seat selection.  At a total fare of DKK 4,344 for the ticket wasn’t comparable to what we might have paid on easyJet or Norwegian, but we couldn’t fly either out of Billund so the point was mute.

Two each 23 Kilo allowance per bag (both ways) cost us an additional DKK 448.  Extra Leg room was a must (otherwise Big Bloke might bust a knee-cap) and we were able to get the emergency aisle seats pre-booked for both of us on all flights for an additional DKK 1,496.

We could have paid for an upgrade to business at the last minute, for just under 50% more, but I’m glad we didn’t.  More on that later.

KLM encouraged pre-booking on the outbound, but that also turned out to be pointless.   We had to stop at the counter to check in our luggage and wait in line to do so, then have the counter agent check our ticket, etc..  For airports where automated drop-off of luggage is unavailable, this feature just doesn’t make sense.  As it turns out, the same was true at Barcelona-Prat.  Until airlines and airports cooperate to effectively equip for luggage drop off they might as well not bother with the pre-booking.  One could argue that it gives the airline a perspective on potential no-shows, with the aim of allowing for wait-listed passengers.  This might be true, but we could still not have shown up on the day.  Frankly, I don’t get it.  The purpose of our trip was to visit the Passenger Terminal Expo, where we saw a lot of nifty machines to automate luggage drop off.  We can’t wait to see them off the show floor and in-service at terminals.

A Six o’clock departure is too early, as it requires us to leave at 03:30 to Billund, but available schedule leaves us no other choice.  We made it and that is what matters.

Billund is a reasonably modern regional airport.  It is, in fact, Denmark’s second most important airport, and the closest to us in Midtjylland.  Reader’s might be interested to know it is also the “semi” official airport for LEGO, as it is right next to LEGOLAND.  There are nice LEGO statues situated throughout the terminal but I couldn’t snap pics because my phone died.

It died because I got all fancy (with us driving through the back-roads at night) and used a new navi system on my iPhone (Sygic).  It’s a nifty app, with a reflective “heads-up” display on the car window for directions, but it gobbles the available power.  I couldn’t find a place to charge the phone at the terminal so no pics.  Sorry.  (Yes, I had the iPad but it was tucked-away in my flight bag and I was too sleepy to think of pulling it out to snap a picture of the LEGO Queen, until I got onboard the aircraft.)

The advantage to business class onboard our 737-700 and 737-900 aircraft was the half-seat space between seats to give you more separation from your travel companion.  The seats are not much wider (only 18″ compared to 17″).  They are still slimline, and it was hard to see the advantage.  Possibly the food service was a better, but it wasn’t a meal at the Jules Verne so not worth the price differential to us.

There was also an Economy Comfort option, but the 18″ seat was still at a tight pitch, compared to our seats in the tourist emergency aisles.  I’m comfortable that we made a good decision.  For Big Bloke, leg room matters most.

The only hiccup, for understandable safety reasons, was that the window seat (Big Bloke’s) has no left armrest.  This proved a bit awkward for him.  It wasn’t a problem on the flights when I had the right armrest to lean on, because no one was in the aisle seat, but that was not the situation on the return flights.  We managed.

A 17″ slimline seat is a tight squeeze, but the cushions were reasonably comfortable.

Each leg was a short flight anyway: 1:15 to Amsterdam then 2:15 to Barcelona.  Seating wasn’t really a problem. 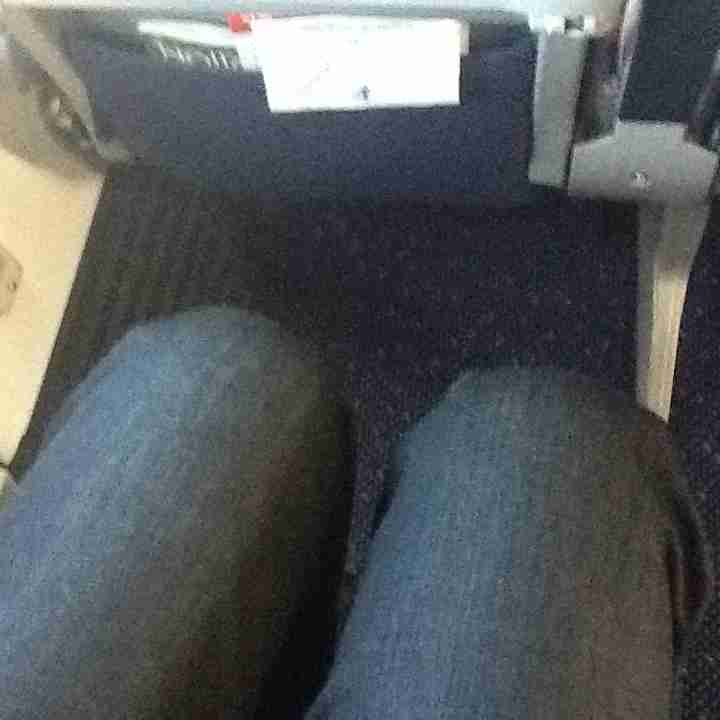 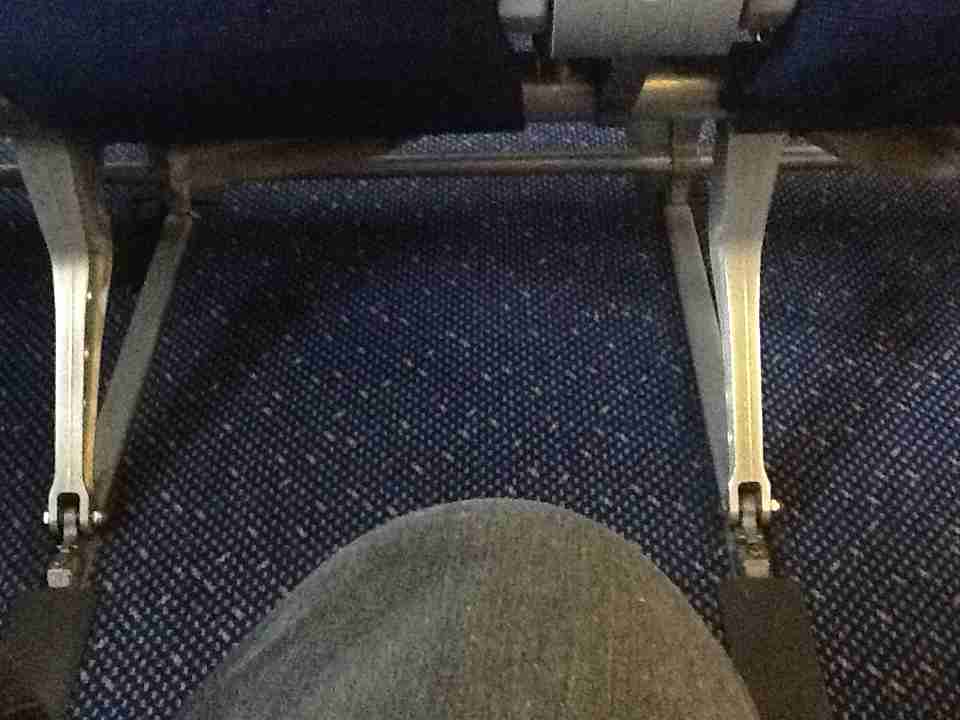 The crew made the flights great.  It wasn’t that they were particularly friendly.  They were, but not the ebullient friendliness that you get from certain carriers.  Rather, they were pleasant and professional.  They took safety very seriously and made a point of checking that we really did know our duties in the event of an emergency.  Sure, it’s a requirement, but it’s all about the presentation.  They seemed genuinely engaged with us on each flight we took, not just doing this by wrote, and I admired that.  They were nice about the service too.

Ok.  It was a snack.  But it was a nice snack, of a simple sandwich made with fresh-baked bread, whole-grain, organic, and locally sourced flour “Ground in an authentic Dutch Windmill.”   There was Dutch Cheese, some sort of pimento mayonnaise, egg, and cheese again with cucumber.  Not bad.  Very fresh.  Cute packaging. 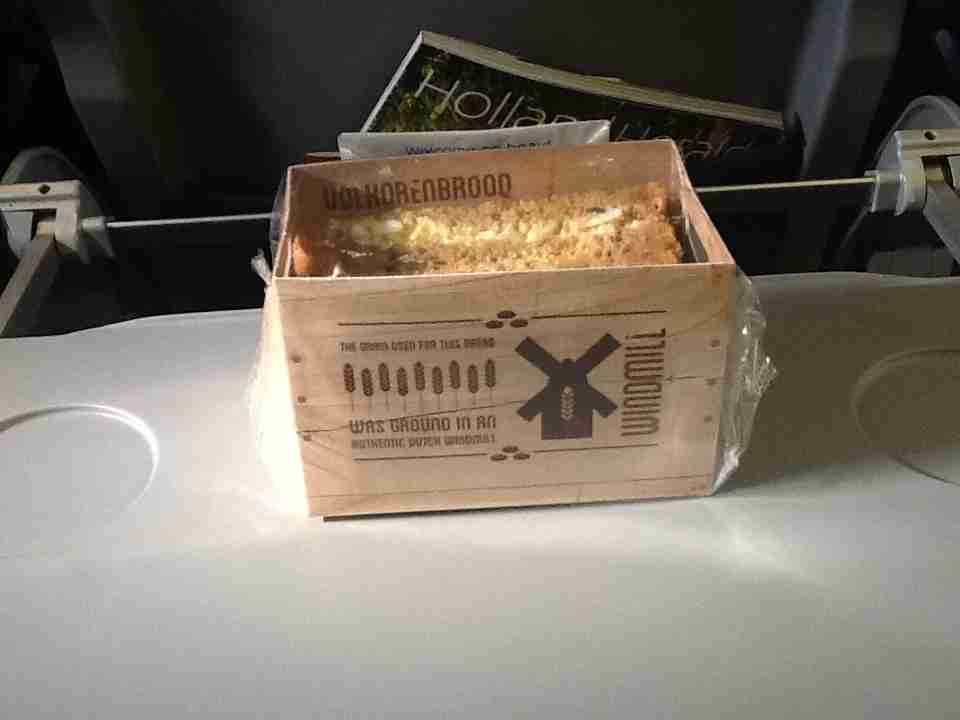 There was a bread recipe in the box, from the baker.  I like to bake my own bread (when I can spare the time) so I kept my little box.

AMS needs better signs and way-finding installations.  I’ve been through Amsterdam more times than I can count, but we still felt disoriented and we were on a tight connection.  We had to go from D-C (then from C-D on the return).  When you’ve just come out of the aircraft, it helps to know which way to turn.  We stopped airport security to verify that we were actually headed in the right direction, as there weren’t any reassuring signs overhead.  I can’t imagine what people might feel if they’re uncomfortable flying, getting on in years, or in need of special accommodation.

A refresh would be nice too.   Some airport areas were showing their years.

You can do better AMS.

Barcelona-El Prat is pretty swanky: walls covered with aqua glass, a very modern design throughout.  There was a good waiting area with plenty of seats.  There were modern flat-screen displays to update flight status (especially important because of the lack of flight announcements).  But the way finding, again, was not so good.

My two cents: We need a universal standard for airport signs, and we need plenty of them.

There was also nowhere convenient to charge devices, especially odd in a “state-of-the-art” airport which won the SkyTrax 2014 best in airport in Southern Europe award.   I saw an enterprising young woman attach her iPhone to a hidden floor outlet at the back of the terminal.  Hardly ideal.

Considering that loads of people on all of our flights had PEDs with them, there’s a definite need.

The flights were good, punctual, pleasant.  As I said, the crew made them so.  (Including the pilot and co-pilot too, naturally.)

There wasn’t any WiFi service onboard, nor any in-seat chargers.  Really, I hadn’t expected any.  It will be a long while before either of those features are available on all aircraft.

Tired as we both were, we preferred having a quick snooze.

We would happily fly with KLM again.