Marisa Garcia Leave a Comment on Airbus Confirms: The A350XWB will be a tight squeeze, and that’s just the right fit. 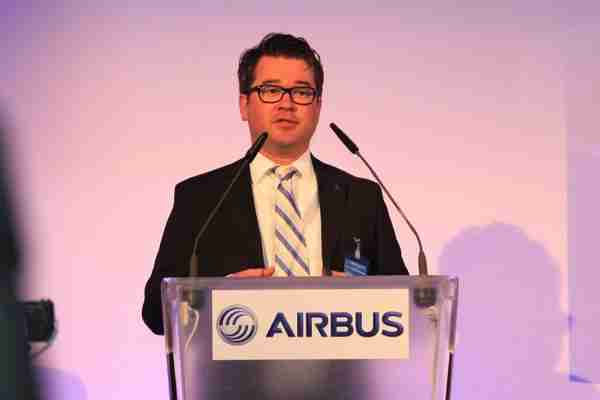 Chris Emerson, Senior Vice President of Marketing at Airbus addresses the press with the good news on the A350XWB, image FCMedia/Flight Chic © 2014

The “Future Proof” A350XWB reveals a future which far from the one we’ve projected.

Listen carefully between the coded speech of the news on the new A350XWB, stand by and hear what is said in quiet corners and you can learn a lot.

There’s a lot of speculation on the potential use of the aircraft and whether 9-abreast or 10-abreast seating will become the norm.  Flight Chic will tell you now: Count on 10-abreast.

During the walk-through of the aircraft, Emerson explained the target market in detail to another member of the press, and it was impossible not to overhear while you waited in line.

Emerson’s staunch defence of the catalogue approach for the aircraft, and his explanation of why 10-abreast might not be a problem is that the aircraft many of the passengers the aircraft will transport will be in markets where getting anywhere you want to be usually involves “train trips which take 24 hours.”  His argument was that these target passengers would be happy to sit in crowded seats to save time by flying to their destination. He’s absolutely right.

As a replacement for train-rides in certain Asian routes, a ride on the most densely packed A350XWB will be a treat and a luxury.

As further confirmation, Flight Chic can reveal that Michel Treillet, Customer Programme Director for the A350XWB Customer Programme told us this morning that this aircraft is ideally targeted for dense configurations in Asian markets where demand will be high for economy seating, and that Airbus is entertaining a number of “high-density, all yankee configurations” for the aircraft with customers Airbus will not yet name.

This tack makes perfect sense as a substitute for mass-transport in this market, and will also ensure that Airbus’ catalogue option is successful, further enhancing their ability to ramp up production and delivery schedules. It is a smart move.

It also reveals an important fact about the famously “comfort-focused” Asian market, the real growth may ride on plain planes.

The future Airbus is “proofing” for is tightly packed, simple, and delivered on-time.  Most likely, in large numbers of aircraft.  We’ll see some 9-abreast here and there, but they will be the exception.