Marisa Garcia Leave a Comment on Oh My Geeky Aunt! The Scandal Behind the #AvGeek Scandal

When reading up on what many agreed was an inappropriate post by Chris Clark on Air Facts about the “damage” the use of the hashtag AvGeek is doing to Aviation, the phrase storm in a teacup comes to mind, except the real storm is about the size of Hurricane Sandy and the Aviation Teacup is quite seriously cracked.

But not for the reasons everyone has their panties in such a bunch about.

Let me say, first and foremost, that the post was clearly listed under the opinions category. As an old friend used to say: “Everyone has a right to their wrong opinion.”

True, it was a dimwitted and ill-informed attempt to call attention to a non-problem in order to…

Actually, I’m not sure what the purpose of the entire post was.

I don’t think any serious member of the aviation community, fan or fellow, really understands why Clark wrote this, but you know how we get around that time of the month.

My favourite comeback on the comments (and there were plenty of good comments) was contributed by Liem in reply to Clark:

“I am, and ever will be, a white-socks, pocket-protector, nerdy engineer, born under the second law of thermodynamics, steeped in steam tables, in love with free-body diagrams, transformed by Laplace and propelled by compressible flow.” – Neil Armstrong

The furore reached such a fevered pitch that Paul Thompson of Flight Club found it necessary to write a very good and well-informed comeback, and Jon Ostrower, aerospace reporter for the Wall Street Journal tweeted a very appropriate reply: 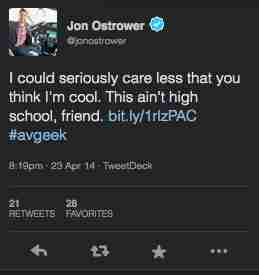 Still, what was missing in all the dialogue back and forth was someone pointing out that Clark’s description of the intrepid “badass” aviators had an even more glaring and insulting angle.

Though his tirade was not gender-specific, it was a clearly male-slanted take on this random thing he decided to be upset about. Clark forgot about the challenges in this “elite community” for half the population–though that ratio is not necessarily valid in aviation.

If Clark wants to go on a rant, I suggest that he stop whimpering about his oddball definition of “Geek”–which is totally out of touch with the badge of pride that term represents to people who like to get in to the nitty-gritty of subjects with a passion which nears the point of obsession and results in great expertise.

You want to go on a rant, Clark?

Get on the rooftops and yell about the difficulties women fighter pilots still encounter today.

Climb a mountain and shout about the injustice of a lack of adequate engineering instruction for women interested in aerospace or ANY science because “women’s brains aren’t wired for that sort of thing.”

Get on your danged plane and write in big white letters on a clear blue sky:

WOMEN ARE AVGEEKS TOO, AND PILOTS, AND AEROSPACE ENGINEERS AND ROCKET SCIENTISTS

You’ll need a pretty big sky to write all that, but the sky is big enough for all of us.

As much fussing about as goes on about the trials and tribulations of prospective aviators, few people in the community rage about the glaringly obvious: despite women making heroic strides in aviation from the very beginning, aviation is still a boy’s club in the main.

Boys will be boys, and get all huffy and puffy about what names they’re called. Try bitch on for size, Clark. Or some choice others.

Clark claims that the brave men of “The Right Stuff” would punch anyone in the nose for calling them an AvGeek.

Well, they wouldn’t, Clark, because they had far more important things on their mind preparing for those high-risk flights, and they never gave a flying shimmy what sewage spilled out of the mouths of detractors.

And much as the women who make aerospace possible have been tempted at times to kick someone in the in the inflight peanuts for derogatory language and outright abuse, they’ve been too busy making history to bother.

Want to make a real difference to aviation, Clark?  Focus on the few valid points you made which were lost in your seepage of drivel: education, financial support, training, pilot salaries.

Those are the issues we need to address. And lets add equality to that for good measure.

Or leave. Fools who fly are a serious safety hazard.

Let fans of aviation call themselves whatever they like. AvGeek seems like a pretty good hash-tag to me. It doesn’t take up too many characters in a Tweet, and it takes a lot of character to use this hash-tag with pride.

Now, everyone get back to the serious business of stretching that flight envelope.

Featured Image of some pretty bad-ass pilots laughing ’cause they’re having fun while not giving a hoot what you want to call them. F-15 Pilots Elmendorf, from Wikimedia Commons.