The Causes and High Costs of Unintended Emergency Slide Deployments

If you’ve never seen an aircraft slide except in pictures, it’s a good thing.

They’re tucked away inside that bump on the door of the aircraft, and all you’re ever meant to see of them (if you’re looking) is the gauge which confirms that the gas which would inflate the slide is properly pressurised.  But unintended emergency slide deployments, like this, do occur.

One of the topics for discussion at this year’s IATA Cabin Operations Safety Conference was the need for effective crew communications and Fatigue Risk Management to prevent these incidents.

Unintended slide deployments are a serious issue, not just because they require maintenance to correct which can leave the plane out of service, but more importantly because they can cause injury or death to persons caught in their path.

According to IATA, “the financial impact can be huge.” Which isn’t really very specific.

A thread on prune.org, a bulletin board for professional pilots who exchange information about their daily experience, suggests that slide deployments (at least on one carrier mentioned) can occur 3-4 times a year.

A separate thread on airliners.net (which includes participants who work in as pilots, crew and line maintenance staff) suggests costs could be as high as $20,000.

Having worked in the inflatables sector for 16 years, I have to say this figure sounds about right. At least, if you have to replace the slide and re-install it. Slides are very expensive, because of the strict design requirements and the length of time between development and approvals.

A difficult battery of tests have to be carried out to prove the safe function of a slide, before an approved inflatables life-saving equipment manufacturer can get the TSO (Technical Standard Order) Certification to sell the product.

Because these products are used for cabin emergencies–and there is always the chance that the manufacturer could be liable for any injuries or deaths during an accident–the product liability insurance these companies must carry runs in the tens of millions leading to high insurance bills every year. Though there are rarely any incidents or claims.

As a result, there is a very limited pool of manufacturers who make these devices.  Air Cruisers, a Zodiac Company, and Goodrich are the two largest.  Getting into the catalogue to supply these products through Airbus and Boeing is nearly impossible for other manufacturers, because both Air Cruisers and Goodrich do a good job.

It is not impossible for a slide to fail and cause an unintended deployment, but highly unlikely.  They are regularly checked and put through in-service maintenance–to ensure they are clear to fly.

When failures happen, like the one shown above, it generally comes down to human error.

Looking more closely at the prune.org thread there are some important points from crew which may need addressing.  Certainly, the issue of effective crew communications and well-defined SOPs (Standard Operating Procedures) suggested by IATA are essential.  But issues like the ones raised by these anonymous pilots need a second look:

There is a difference on the process for disarming the slides depending on aircraft types.  There is no one standard.  Some are disarmed from inside the aircraft, therefore by cabin crew, and others must be disarmed from the outside of the aircraft by trained ground staff.  This requires coordination and effective communication between the ground staff and the cabin crew inside.

In short, the picture may look funny, but this problem is no joke.

A misunderstanding over whether the slide has been properly disarmed can result in disaster.  Because there is a person on either side of the door where the slide will inflate, serious injuries can occur.

Slides are inflatable, but don’t think of them as soft.  All inflatable equipment designed for aviation emergencies is charged with sufficient pressurised gas to make the unit hard as a rock.  They become very solid objects, able to carry the weight of the passengers who will use them.

The thousands of pounds of pressure (in which the gases which inflate this equipment are compressed) are released all at once.  This means the slide has tremendous force behind it.  They deploy in seconds, giving no one a chance to get out of the way.

Even checking and maintaining the gas cylinders themselves is a dangerous operation, which requires special training, licence and equipment.

I know of one death by decapitation from a technician who was careless while performing this operation, even though he was well-trained.  He was only momentarily distracted.

That is how it is in aviation.  Lose focus for a moment, and you could pay for it with your life.

Beyond the issue of communications and SOPs, crew fatigue is a serious factor.

With cabin crew overworked, often underpaid, and just plain tired after a flight’s worth of duties, it should not surprise anyone that occasional mistakes occur.

What should receive special mention here is how rare those mistakes are.  It speaks to professionalism of flight crew and to the effectiveness of recurrent training.

The industry must do more to prevent these problems, and it is doing so, at least in enhancing communications protocols.  The fatigue issue will need closer scrutiny, as crew are pushed to their limits and often underpaid.

I’ve written before that I recognise the economic realities airlines face and that the crew-wages and benefits issues are not easy to resolve.  I still acknowledge these factors, but they not take away from the fact that something must give.

Passengers can help.  We often think of flight crew as the people who should walk around smiling and bring us our drinks and meals, and occasionally help us put our bag up inside the bin.  They’re not.  That’s their side-job.  It’s something they do as a nicety, to enhance the passenger experience.

Their primary role is to risk their lives for the people on the plane, should they need to do so.  They are on that aircraft to help everyone get out alive in an emergency, even if they do not.  And both flight attendants and flight crew have died fulfilling this mission.

We really should not rush to the door when the plane hits the ground.  We could complicate the necessary communications for these cross-checks, which prevent slide deployment.  There’s a good reason crew ask that we stay seated after landing.

It’s important for us as passengers to keep all this in mind.  When we fly, we become part of a community of strangers who have agreed to undertake a risky operation to get somewhere far away in a relatively short time.  Because of the many processes in place, aviation is a very safe method of transportation, but it does need everyone on board to do their part–that includes passengers.

Be kind to your flight crew, and appreciative.  Don’t stress them out.  Your life might depend on it.

What a Tuit: False Assumptions Cause Deployment of Emergency Services to Rescue “Fallen Plane” in Spain 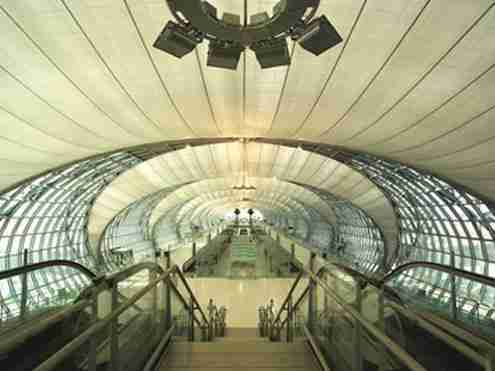