The International Air Transport Association (IATA) has published its first edition of the Lithium Battery Risk Mitigation Guidance for Operators.  This free online guidance material furnishes critical information on the safe handling and air transport of lithium batteries to airlines.

“Lithium batteries are safe to transport provided that they are designed, tested, manufactured and packaged in accordance with the global transport safety standards. Developed with the input of leading industry groups specialized in the area of handling potentially dangerous goods, the Lithium Battery Risk Mitigation Guidance for Operators represents an invaluable source of reference,” said Kevin Hiatt, IATA’s Senior Vice President for Safety and Flight Operations. “Whether on passenger or cargo aircraft, operators can now rely on this guide, which will be updated and expanded as needed.”

IATA addressed the risks of Lithium Ion Batteries at its Safety Conference in Madrid earlier this year, and Flight Chic prepared a comprehensive reports on the risks the batteries which power most of our electronic devices pose to aircraft both on this site and in an in-depth report published in the June edition of Aircraft Interiors International Magazine.

As IATA sates in its newly published guidance:

“It is estimated that each year, upwards of one billion lithium batteries are transported by air as mail, cargo or in passenger/crew baggage. This constitutes a
safety hazard that must be managed in a clear and comprehensive manner.”

The risks of runaway fires is extremely serious.  Potential ignition is difficult to predict because damage to the battery, which could start fires, is not always evident.

The world’s regulatory authorities have banded together to raise passenger awareness of the risks and to discourage passengers from placing Lithium-Ion batteries in their checked luggage.

One of my recent favorites is a video put together by CASA, the Civil Aviation Safety Authority Australia, as part of their Flight Safety Australia educational and awareness initiatives.

Under the title Top Ten Least Wanted, CASA lists the types of dangerous goods items they really don’t want us to try to put in our luggage.  CASA states that Lithium Ion batteries are in the number one spot of this dangerous goods list, and references a battery fire which ignited in the cargo hold of an aircraft just before passengers boarded a flight bound from Melbourne to Fiji as an example of why batteries rank so high on their list.

The fire in question started in a passenger’s bag, just as it was loaded on the plane.  According to an ATSB report, the passenger who owned the bag was asked whether there were any batteries in the checked bags, but the passenger only declared eight lithium batteries, claiming they were packed in hand luggage.  In all, the checked bag was found to contain 19 intact batteries and 6-8 more batteries destroyed by the fire.  Fortunately, the fire took place just before boarding the Boeing 737, as a later ignition could have been catastrophic.

CASA has created a dangerous goods app to help passengers determine what is and is not safe to bring onboard.  The TSA, in the US, also has a handy mobile app for passengers to use.

Some dangerous goods prohibitions can be obvious.  No.  Do not pack fireworks in your luggage for New Year’s Eve celebrations.  Others are a bit less clear because some things which may be OK to carry onboard are not OK to put in the cargo hold.  It’s important to remember that, in the cabin, any incidents resulting from the limited dangerous goods items allowed onboard can be seen and addressed by trained cabin crew immediately.  Whereas, in the cargo hold, they could go undetected and pose a risk to the aircraft and all passengers onboard.

It’s always good policy to check first, before packing your bags, and to take these risks seriously.  Incidents might be rare, but it only takes the one.

As CASA says in its video: “Always remember—if in doubt, ask.” 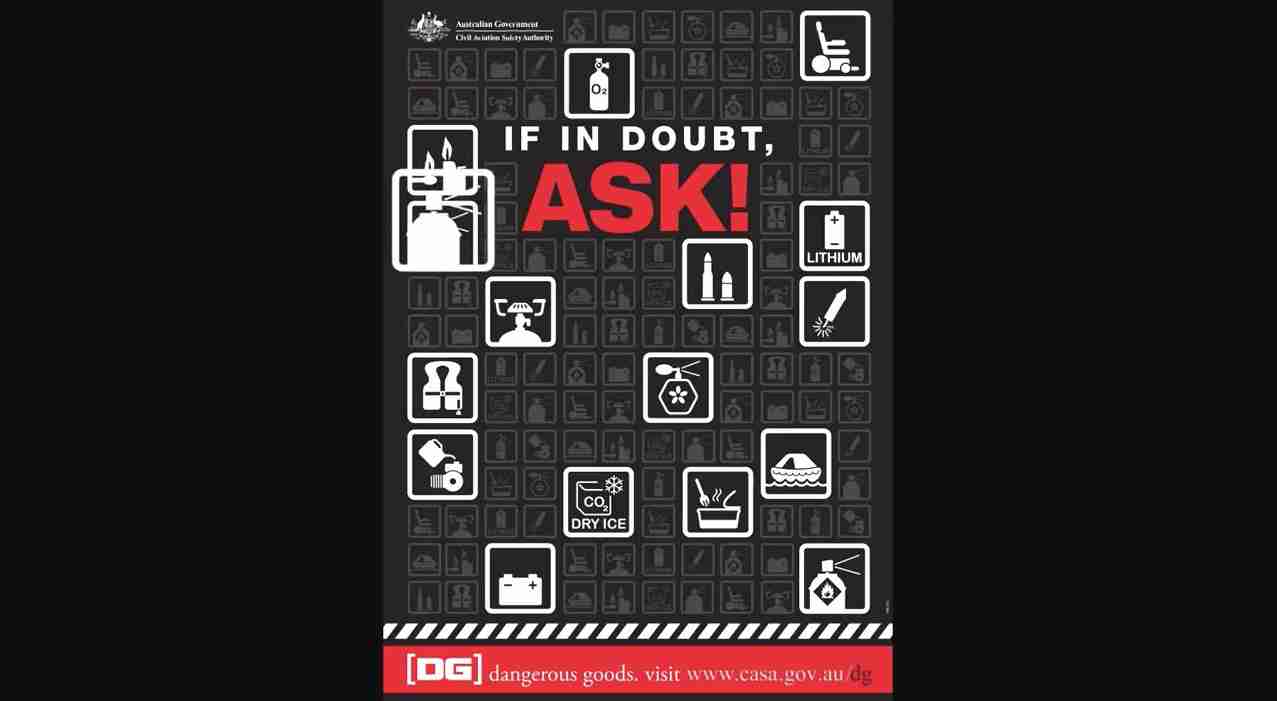