Snow? What Snow? Feel the Heat Of the Stories Behind These 4 Aviation Stories You Might Have Missed

While I’m assigned certain topics and recommend others, hot news will hit the wires each week–it’s up to the fates of aviation to decide which ones–and my stories often have a common theme. This week’s theme is: feeling the heat.

The Middle East is exporting its own high temperatures to European skies, with heated competition for the airspace. Etihad Airways has carefully positioned its partnerships in the EU market to blanket the map. The EU commission was asked look into the legalities of this incursion by Lufthansa, but so far any set backs for Etihad and partners have been short-lived. You can read more about those developments in this article from last November on Flight Chic: Northern European Skies Just Got Hotter. These stories (mine in bold) on Skift are also good background material:

Lufthansa Has Small Victory Over Etihad In Switzerland, Jan 2015

The biggest EU move by Etihad has certainly been the airline’s acquisition of a 49% share of Alitalia and its direct involvement in managing the troubled Italian carrier. Hot branding talk aside, the issues which have plagued Alitalia for decades might not be easily overcome. We examined this situation on Skift last week, after the unveiling of the latest strategic plan to re-sexify Alitalia (at least for investors).

1. Warm up by reading all about in my article for Skift last week: Can A Focus on ‘Sexy’ Save Alitalia From Itself?

Of course, the heat isn’t just coming from the East, high temperatures are also emanating from the unlikeliest of places (climate-wise): Ireland.

Cool and collected British Airways, reorganised with its warmer partners Iberia and Vueling under IAG, have been courting Kelly green Aer Lingus for a buy out. Each time, the stakes have gone up by small increments of exactly ten Euro cents (from 2.30 to 2.50, with an added 5 cents a share of cash dividend as incentive). After many refusals of the proposal, Aer Lingus now appears poised for the big yes. At least, it has confirmed that it is thinking about it.

Here are some independent thoughts on the big green buy-out:

IAG acquiring Aer Lingus would be tragic & is demonstrative of how ridiculous the lack of capacity at H'row has got.http://t.co/JmtzRa2MBv

Why Aer Lingus Is the Best Thing That Never Happened to Ryanair, Jul 2014

2. If this wasn’t all hot enough for you, we head over to the Caribbean. Starting with the spotlight I wrote for the APEX Association’s Digital publication last week: Spotlight on the Caribbean: Growth With Warmth and Home-Grown Goodness.

That story was inspired by warming relations between the US and Cuba, and looks further into the impact on the Caribbean aviation market if US-Cuba tourism finally opens up.

3. Of the US carriers, JetBlue appears most keen to see this new relationship headed in the right direction, as you’ll learn when you read my story for Skift: JetBlue Applauds New York Governor’s Cuba Efforts As It Positions Itself for More Flights

As an aside, today Iberia announced that it will re-launch its routes to Havana, cancelled just under two years ago because they were unprofitable. You can read all about it on VolandoAndo in Spanish, but here’s the bottom line in English: 5 flights a week between Madrid and Havana starting June 1 for as little as 599 Euros roundtrip. Will more follow? Will there be a Miami connection? An Iberia spokesperson had this to say to Flight Chic:

“It’s a great day for Iberia [with this announcement]..at first we will keep to the direct Madrid-Havana route, which is facilitated by new cost structures and the flexibility of our employees to renegotiate their agreements. We have also considered the tourism potential and demand from passengers (both for business and tourism) from Spain and other European countries such as Italy, Germany, France and Switzerland.”

Make of that what you will, but I sense further investments will be made by European players to build adequate infrastructure in Cuba, in anticipation of demand once US tourists are finally able to enjoy the island. This jives with one of the salient objections to growth raised in by analysts as featured in the Spotlight on the Caribbean I wrote for APEX.

4. After tolerating the heat from the new Skift Airline Rankings for The World’s Best Major Airlines for the Economy Long-Haul Experience, we dipped our toes further in hot water with Luxury on a Budget: The Best Boutique Airlines for an Economy Long-Haul Flight. Admittedly, “Boutique” is not an official transport category for airlines–but it should be! These smaller carriers really class-up the back of the plane. And we’re not quite done with raising hackles and blood pressures with Skift Ratings. More ratings are being tallied now, but some really seem to appreciate the effort we’ve put into developing these unique rating systems–which is all the reward we need for our hard work.

@rafat @skift You guys crunched a ton of numbers for that. Nice job to @designerjet 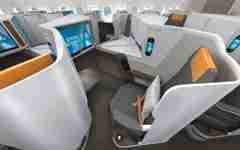