Ryanair confirms it will have no bases in Denmark by midnight Friday of this week, July 17, unless Danish labor unions back off on threats of blockades. 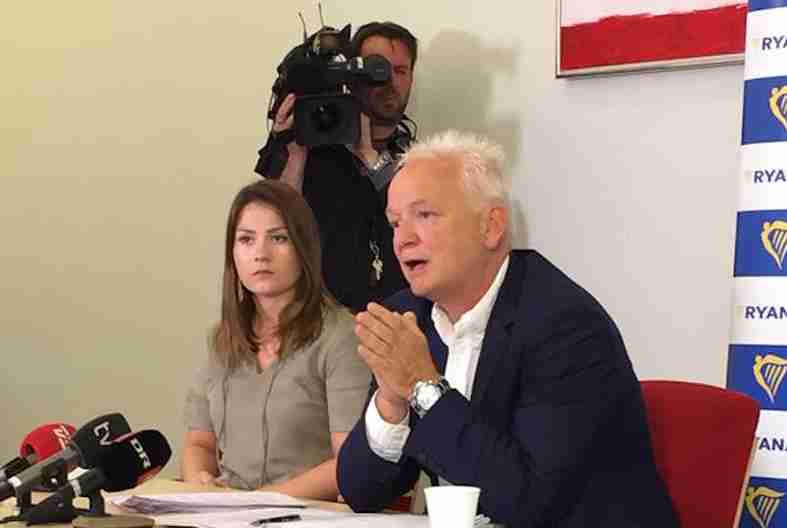 This is the latest result of ongoing battles between the Irish Low-Cost Carriers and Danish labor unions which want Ryanair to adopt the Danish Model of labor negotiations for employees based in the country.

Ryanair has already announced that its Copenhagen base will close later today (July 14), as a result of these labor actions. This base closure affects one aircraft which Ryanair will transfer to a base in Kaunas airport in Lithuania, but labor actions threaten all the airlines flights, whether based in Denmark or elsewhere.

At a special press conference held within walking distance of the entrance to LEGOland and LEGO’s Headquarters in Billund Kommune, Ryanair’s Chief People Officer, Eddie Wilson, confirmed that Ryanair will close its base in Billund Airport as of 23:00 this Friday, July 17.

This date is based on LO’s threats to move forward with collective actions to blockade Ryanair’s flights in Copenhagen and Århus, starting this Saturday the 18th. By closing its bases in advance of these labor actions, Ryanair avoids interference with its flights based elsewhere.

Such action against the flights of operators who are not based in Denmark would no longer be in keeping with the scope of Danish law or the judge’s ruling.

Ryanair has corresponded with Lisette Risgaard, Vice President of LO, the Danish Confederation of Trade Unions, as this situation has spread from a dispute over the Copenhagen base to a dispute affecting the entire kingdom of Denmark. Ryanair invited Risgaard to attend the press conference this morning, but she did not do so.

Risgaard had stated that LO would “not active secondary actions if Ryanair does not have any bases in all of Denmark.”

It is this assertion that prompted Ryanair to move forward with the closure of its remaining base in Billund.

The three aircraft which Ryanair has based in Billund airport for the past three years, without incident or anyone raising labor concerns, will instead be based in Stansted (2) and Dublin (1) starting by Friday night.

For Ryanair, closing the base in Billund will mean relocating 100 Ryanair crew and changing its flight schedules–to adjust for new service originating elsewhere. To minimize disruptions, Ryanair will continue to operate twelve of its fourteen summer routes to and from Billund on aircraft based outside of Denmark.

“We sincerely regret any inconvenience caused to our people and our customers by this week’s base closures in Copenhagen and Billund, however the Danish Unions have made clear that, as long as we have any base in Denmark, they intend to engage in secondary strikes at Copenhagen, despite admitting they have no members among Ryanair pilots or cabin crew,” said Eddie Wilson, Ryanair’s Chief People Officer.

Ryanair fought a battle in Danish courts to prevent being forced by Danish Unions, demanding that it extend the Danish Model of labor contracts to its employees based in Denmark. But the Danish court ruled against the airline.

Ryanair had argued that, as a foreign company, it had no obligation to establish such collective agreements with employees–who themselves have not asked for these labor protections from Danish unions and are eligible to organise under Irish law. Ryanair pledged to appeal the Danish court’s decision.

Today, Wilson told Flight Chic during the press conference that Ryanair intends to take the matter of being forced to close down its bases in Denmark to European courts. Ryanair’s argument is that the events in Denmark contradict European agreements on freedom of movement and trade, and consist of little more than anti-competitive practice disguised as a defence of labor rights.

“This whole issue is about stifling competition,” Wilson told Flight Chic. “They have selectively targeted Ryanair in this way, for this action.”

Ryanair claims that local airlines have motivated this dispute, and points out that other airlines, such as British Airways and Emirates, which have bases in Copenhagen, have not been “blackmailed” to make similar labor agreements.

Wilson’s and Ryanair’s suspicions were echoed by a member of the Danish press, speaking off the record, who told Flight Chic that Ryanair was singled out by the unions because it is the icon of the Low-Cost airline model in Europe.

Ryanair will reach out to about 2,000 passengers affected by this base closure, making necessary ticket changes for other flights or refunds, in keeping with European Union passenger rights protections, Wilson said.

The airline’s four winter routes between London, Budapest, Malaga and Tenerife will be reduced, leaving only the London service. Ryanair expects these schedule reductions to result in reduced traffic out of Billund from its customers of over 50%, down from 700,000 per year to 300,000 per year.

[Additional reports and analysis of long-term repercussions will follow]