FURTHER UPDATE: It’s always good to have a happy ending restore your faith in humanity, and this story certainly does. Nikos Loukas has announced a pledge by Monarch Airlines to fly eleven pallets of supplies gathered to the island of Kos to help refugees.

MONARCH AIRLINES HAS OFFERED TO SEND ALL DONATIONS FROM THE UK TO KOS ON THE 7TH OCTOBER FOR FREE. THAT MEANS THAT A TOTAL OF 11 PALLETS OF ITEMS INCLUDING FOOD, CLOTHING, WATER AND SLEEPING BAGS WILL BE DELIVERED TO KOS KINDNESS CHARITY!!!–Nikos Loukas, Inflight Feed

UPDATE: Sadly, lacking sufficient support, Nikos Loukas has decided to abandon his plans to bring supplies for refugees to Kos. It must be noted that before making this difficult decision, Loukas did receive a commitment of 1,000 sleeping bags from British Airways and children’s kits from KLM. Their offers of support, along with the other commitments made previously, show the best of aviation. The sad conclusion, however, reflects the challenges of managing the refugee crisis in Europe. We can only hope for better days for all those affected.

Loukas says he was shocked into action when confronted by the heartbreaking images of young Aylan Kurdi’s body washed up on the beach.

“Here I was this week sitting in business class eating great food flying across Europe with not a care in the world. Then whilst flicking through the news I came across that terrible picture of the young child who drowned in the water in Turkey and that changed everything,” Loukas explains. “The plan is rather ambitious, but I am hopeful it will all come together.”

His aim is simple: to bring essential supplies to those waiting on the Greek coast island of Kos, including blankets, pillows, amenity kits, water packets, and personal amenities.

To accomplish this, Loukas needs help from the industry. He needs donations of supplies and food, volunteers who will help distribute goods, storage space, and the sponsorship of an airline to operate a charitable flight from London to Kos carrying supplies and volunteers on 27 September.

Because of the size of Kos Airport, only a narrow-body aircraft, (a B737 or A320/A319) could make the flight, Loukas says. Chartering such an aircraft would cost around £80,000, a sum cannot raise on his own.

Loukas is not asking for cash donations; only donations of supplies from airlines, catering companies, and industry suppliers. He hopes that an airline will take the lead in this cause and arrange the flight for the day, to carry the supplies and the volunteers.

“There will be space to take up to 130 people but this is no holiday,” Loukas says. “Anyone who comes along must pack a suitcase full of items that they would like to donate.”

Loukas has received some support from the industry, but not all the support he needs.

Loukas hopes to get additional donations of pillows, blankets, water, snacks, kids packs, amenity kits, and similar items. He also needs a charitable airline to get behind the project and coordinate the return flight to Kos on 27 September. 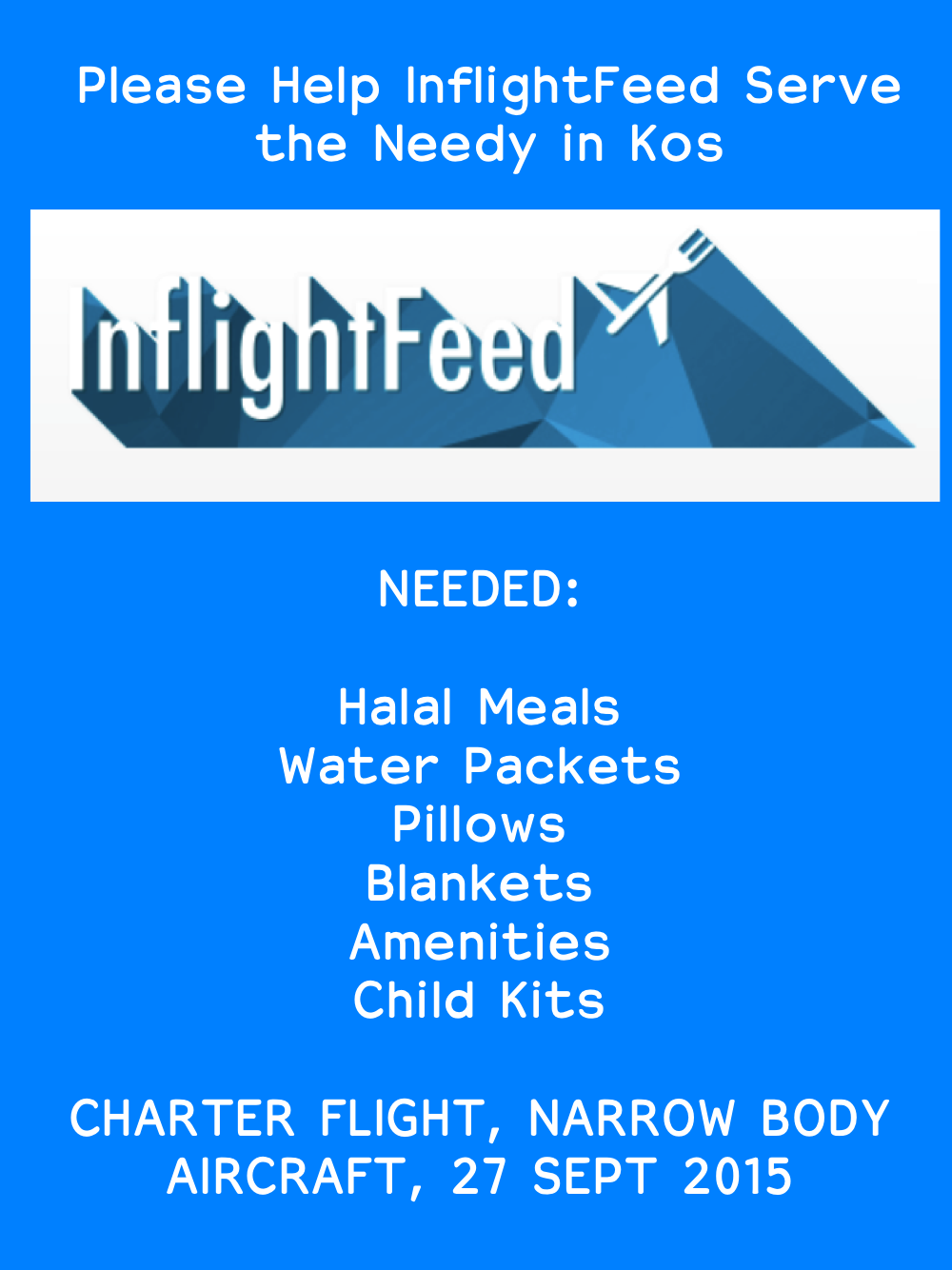