In a warm brand move, Iberia has knitted together a lovely Christmas video “Feel the Warmth of Christmas,” with a unique AvGeek spin on the traditional hand-crafted Christmas jumper.

The video celebrates a common love of planes, while highlighting the airline’s attention to every detail in the design and appearance of its aircraft.

Iberia has also revealed its special Christmas menus for the 24th, 25th and 31st of December. The airline will serve its passengers Christmas cakes and sweets – including the traditional Spanish almond nougat, turrón, hand-made marzipan from Toledo and chocolates.

From today until the 4th of January, children will be given special stationery so they can write their letters to the “Three Wise Men”, who, in Spanish tradition, deliver presents on the 6th of January.

Iberia’s aircraft will be decorated with special holiday headrest covers during the holiday season. On long-haul flights, Business Class amenity kits and elements of the second catering service on Economy Class will be specially decorated. 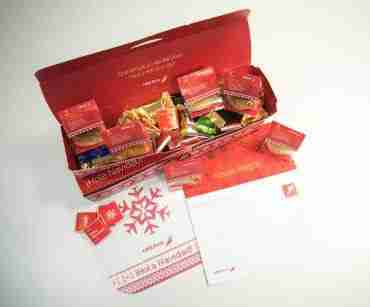 As an extended holiday treat, the airline has announced that it will serve a traditional Spanish pastry for the feast of the Three Kings, with a delightful surprise baked right in.

On the 5th of January Iberia passengers will be served the traditional Roscón de Reyes or “Kings’ Ring” pastry, packed with gifts. Trinkets inside the pastry packets will include special surprises for two lucky passengers: one of 50,000 Avios loyalty points and another of 100,000 Avios.