Through a joint initiative, Inmarsat and the European Space Agency (ESA) will optimise the airspace and airport capacity in Europe, reducing flight times, aircraft fuel burn, and associated CO2 emissions.

Dubbed the Iris Service Evolution program, Inmarsat will head a consortium of more than 30 companies across the aviation industry who will collaborate to develop a technical, commercial and operational roadmap for Europe’s long-term air traffic communications demand.

Alitalia is the official airline partner of the newly created Iris consortium.

“Air traffic management is under great pressure and there is no doubt that the digitalisation of cockpit communication is a vital building block of the future, opening the door for airlines to truly benefit from enhanced data utilisation,” said Leo Mondale, President of Inmarsat Aviation.

“Iris will mark a new era of communication in the aviation industry and places Europe at the forefront of ATM innovation. Inmarsat pioneered satellite data link services in oceanic areas 25 years ago and we look forward to now bringing this expertise and knowledge to continental airspace. Together with ESA and members of the Iris consortium, we will demonstrate the important contribution that Iris will make to air traffic management in Europe.” 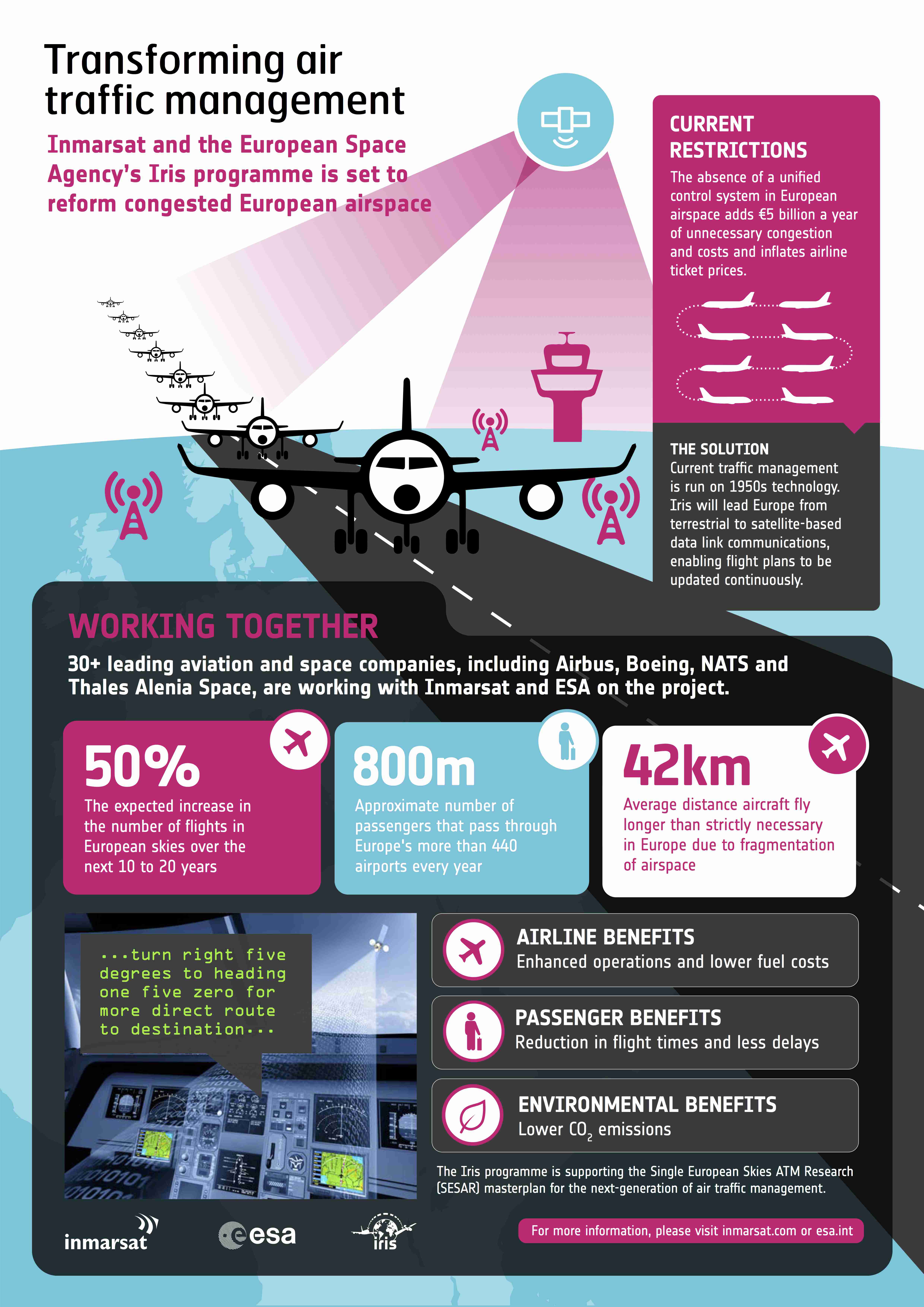 Iris Service Evolution builds on the Iris Precursor contract which ESA awarded to Inmarsat in November of 2014. That program established an initial set of services which complement existing, congested terrestrial data links.

“Iris brings safer air traffic management to airlines and their passengers. It is an outstanding example of how cooperation between commercial partners and institutions can create effective technical solutions that improve our everyday lives and make European companies more competitive in the world markets,” said Magali Vaissiere, Director of Telecommunications and Integrated Applications at the European Space Agency (ESA).

The Iris Service Evolution program will provide communications capabilities that would support the Single European Skies ATM Research (SESAR) masterplan for NextGen air traffic management. It offers a high-level view of critical developments in the airspace and helping to optimise aircraft traffic and airport capacity utilisation.

“We will make our know-how available for this key project, which will revolutionize the aviation industry,” says says Giancarlo Schisano, Chief Operations Officer at Alitalia.

“We believe that satellite communications represent the natural development of the industry and will lead to concrete benefits to airlines and their travelers due to reduced flight times, more savings on fuel consumption and an even more advanced flight safety,” he added.

Benefits will extend beyond Europe’s borders

“While the programme will initially focus on Europe, the services will also benefit ATM operations in North America, Asia Pacific and other regions around the world where the growth of air traffic is placing a strain on ground-based networks,” says Inmarsat.

Iris Precursor should support CPDLC and i4D flight path control by 2018, allowing the exchange of information directly through avionic systems.