JetBlue has quite predictably jumped on new opportunities to compete with Virgin America, in anticipation of a service gap which could arise as the Virgin brand is rolled up into more conservative Alaska Airlines, by launching more Mint transcontinental routes.

The feisty New Yorker is not being at all subtle about this move, saying it is “seizing an opportunity to introduce competition in east and west coast markets where customers are faced with a decreasing number of choices and where other carriers sell dated business class options at a high cost.”

“Our plan has long called for strategic growth of Mint on these valuable transcontinental routes, and now is the right time for us to capture this opportunity to bring much needed competition where customers are facing dwindling choices.” 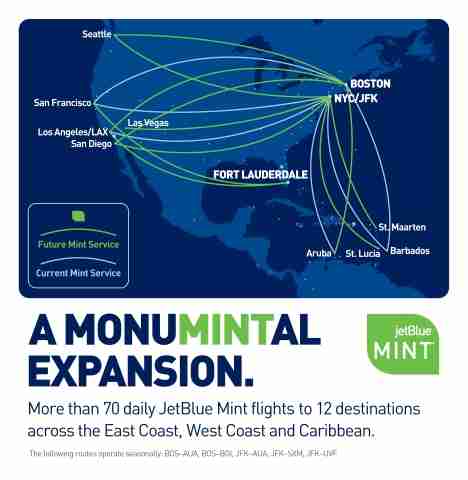 JetBlue attributes the launch of these new Mint cities to a “strong demand for premium travel.” The added Mint services will launch in the first quarter of 2017, with planned launches to continue through 2018 as the airline takes delivery of new A321 aircraft equipped with Mint cabins.

As stated here before, JetBlue’s introduction of Mint, competing with Virgin America’s upscale in-flight product, changed the low-cost game in the U.S. before the acquisition shake-up. Now is the time to push this advantage and JetBlue gets that.

Mint customers will get a proper sleep onboard as they travel coast to coast, but JetBlue sure isn’t napping.