The 7th annual Switchfly Reward Seat Availability study is out, revealing the airlines which offer flyers the best opportunities to book rewards tickets.

Switchfly is a travel-commerce and loyalty platform that helps enterprises rapidly deploy and personalise travel services.

As they have since 2010, airberlin, Southwest and Virgin Australia have made to the top six airlines for overall availability of reward seating. 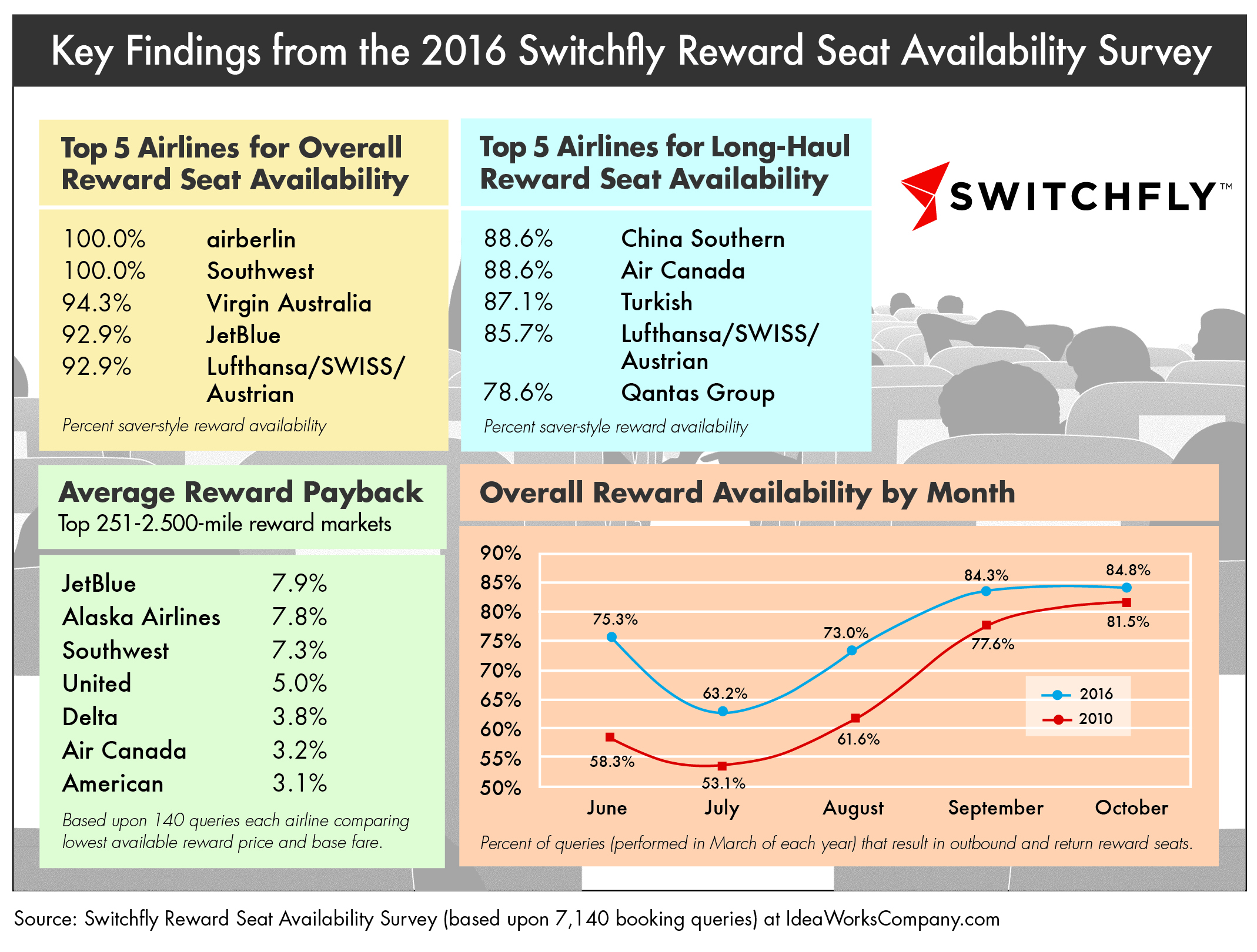 “This survey reflects the fact that airlines can’t afford to take their customers for granted. 21st century consumers are savvy and plugged-in. They know when their loyalty programs are offering them a real value and when they are not delivering; and they don’t have time for loyalty programs that aren’t delivering, especially in such a competitive space,” says Switchfly CEO Daniel Farrar of to the 7th Annual Survey.

“Every time a customer interacts with the brand–online, offline or mobile–the user experience must be on-point. Airlines must make this happen and ensure that zero customers have a bad experience anywhere along the booking or redemption path,” Farrar adds.

Switchfly finds that–contrary to chatter in Frequent Flyer forums–airlines now offer better availability of frequent flyer seats than in past years, especially in the US.

However, on some airlines reward seat availability is still difficult, and certain airlines have performed lower than in previous years.

Overall reward seat availability dropped most dramatically for the Air Asia Group BIG program, which dropped 25 points from 2015, putting it in the 19th position with only 60% availability.

The American Airlines AAdvantage program was next in overall points drop (10.7 points) although the airline already ranks third from last on reward availability, ranking 21 with seats available on 53.6% of Switchfly queries.

The Alitalia MilleMiglia program also dropped 9.3 points in availability of reward seats. The airline ranks 18th overall with an availability percentage of 61.4%.

The least likely airline on which passengers might find reward seats available is LAN’s LANPASS program, which ranks 23 and has an availability percentage of 45%.

The SAS Eurobonus program ranks 20th with a 57.9% availability of reward seats overall, though that is a 2.9 point improvement for last year.

Switchfly and Ideaworks report that long-haul travel is becoming easier to book with rewards programs on the whole, with airlines offering more reward seats on routes over 2,500 miles.

“Notable price hikes have been made in the last couple of years by US-based global carriers and this mitigates the benefit of better availability,” the report states.

The SAS Eurobonus program ranks last (17) on seat availability for long-haul flights, with rewards seats available on only 15.7% of flights, though that is an improvement of 4.3 points.

IdeaWorks introduced a new feature to the report last year, developing a metric to measure the best pay-back on rewards programs, which represents the reward value returned per dollar spent on base fares. The consultancy calculates reward payback by dividing the cash-value of the reward ticket by the total base fare passengers must spend to accrue the necessary points to claim the reward. Effectively, is a currency value measure for rewards programs.

For example, if a reward ticket valued at $250 requires twenty trips with a total spend of $4,980, then the reward payback is 5% and the dollar value of reward points is 5 cents.

The methodology used considers the rewards for everyday travellers, and does not consider the greater ‘currency’ value of premium tickets purchased, with higher reward tiers, or preferential reward bonuses given to elite program members. It also does not consider rewards from spending on co-branded cards. It is therefore more relevant to leisure travellers or those flying business who fly occasionally with an airline, never reaching elite status. This metric is only calculated for North American carriers.

Though the top three have Payback scores which are reasonably together, the drop in payback valuation for the remaining five airlines measured is significant.  United MileagePlus ranks in fourth place with 5% payback. American AAdvantage ranks last with a Payback percentage of 3.1%. American has announced that it will introduce revenue-based rewards accruals during the second half of this year.

For Every Reward There Is a Season

These reward seat availabilities were queried in the month of March, so it helps to plan early.

Airlines have a particularly delicate predicament with their rewards programs. Having built them up to strong–sometimes even self sustaining–businesses over the years, they must be ever watchful to neither give up too many revenue opportunities or to overly devalue them.

There’s no such thing as a free lunch, but consumers like getting a little extra when they spend their money. Psychologically, that’s what makes these programs work.

With seat load factors high, fares low, and growth in the market looking fairly secure airlines can’t be faulted for trying to make their reward programs more rewarding for those who spend more, just as American Airlines has done.

The possible valuation of  rewards as currency is also problematic for airlines, with serious security and tax implications.