With help from Etihad Airways equity partners, Air Serbia has launched flights to the United States. This is the first Transatlantic route for the airline, and marks a return of direct services between Serbia and the USA after a 24-year absence.

Air Serbia will offer five-times-a-week scheduled flights between Belgrade and New York JFK International Airport. The route is operated with an Airbus A330-200 aircraft.

The A330 aircraft used for the route has been configured with 254 seats, in two classes. Business class has fully lie-flat seats, and there is modern Audio Video On Demand (AVOD) inflight entertainment at every seat featuring the latest films, music and TV shows in English and Serbian. 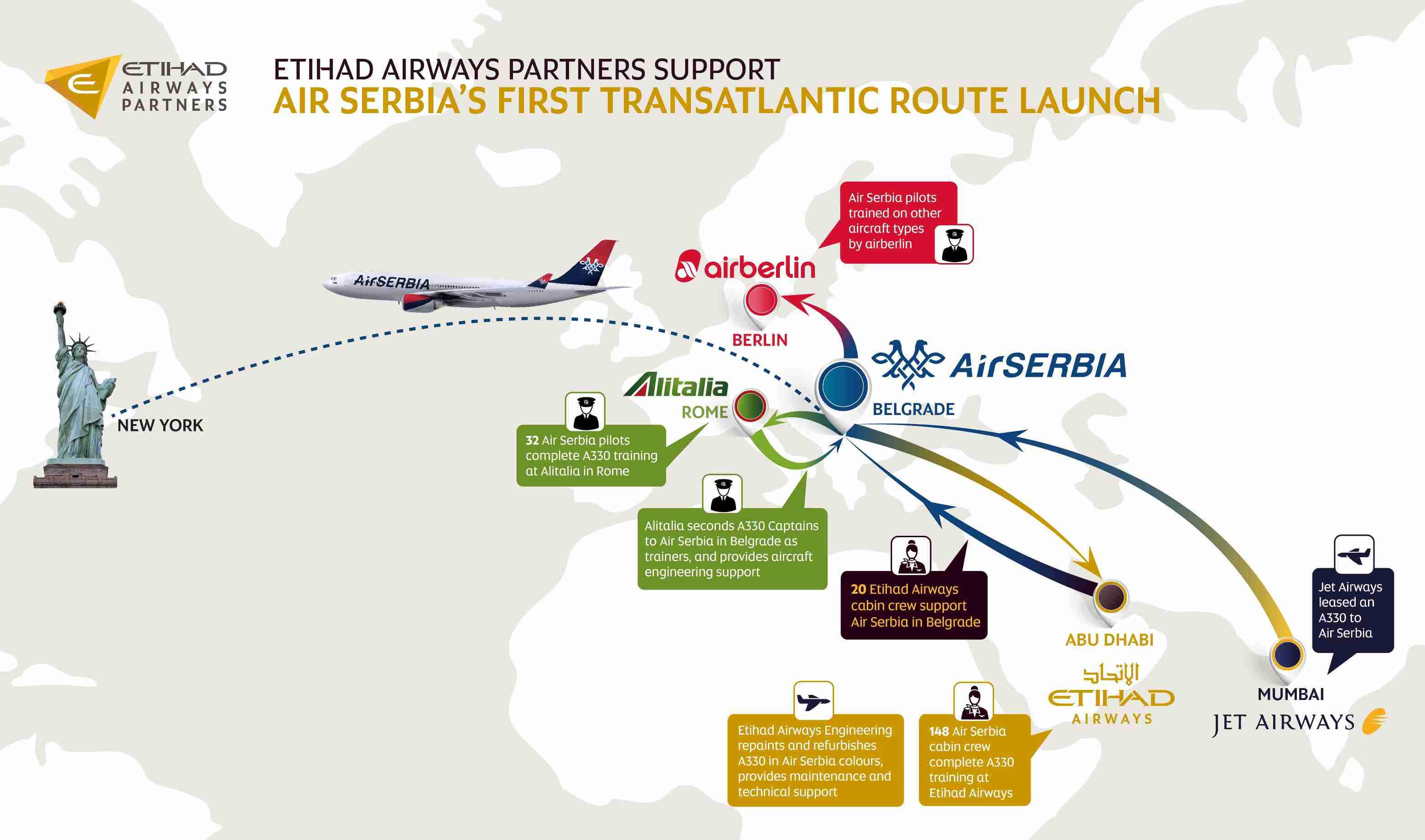 148 Air Serbia cabin crew, who will serve the route, completed A330 aircraft type rating training at Etihad Airways’ headquarters in Abu Dhabi. Etihad Airways has also trained over 450 Air Serbia crew on narrow body A319 and A320 aircraft since 2013.

36 Air Serbia Cabin Seniors who will be Cabin Managers underwent a dedicated 3-day Leadership training course in Abu Dhabi as well as specific training in Belgrade.

Etihad Airways has also given Air Serbia 20 cabin crew to support the first three months of the New York route launch. They will serve as group ambassadors and to assist with onboard service delivery and ensure a continuity of group brand service.

Alitalia has also seconded two A330 Captains to Air Serbia. They will share best practices and expertise on A330 operations with Air Serbia colleagues as they familiarise themselves with the Transatlantic route.

airberlin has previously trained a number of Air Serbia pilots on other aircraft types.

Jet Airways leased the A330 used on this route to Air Serbia and Etihad Airways provides technical and maintenance support.

In all, up to 80 Etihad Airways and Air Serbia staff were involved in the transformation of the A330.

Alitalia is also assisting with back office engineering support of the aircraft in service.

While the objective of all airline alliances is to accomplish similar synergies and service standards, the independent operations of alliance members can often lead to cross-purposes and even some push-back on group standard proposals.

With a 49% stake in Air Serbia, Etihad Airways has the authority to require and take an active role in the shaping of partner airline brands and the evolution of their service models.

“Cooperation and collaboration between the equity partners has been second to none,” says James Hogan, Etihad Aviation Group President and Chief Executive Officer. Hogan is also Vice Chairman of the Supervisory Board of Air Serbia.

“The Etihad Aviation Group is all about driving innovation and efficiency, and as our equity investments mature, so too, will the benefits and synergies become more apparent. By developing our unique equity strategy over the past four years, we have created a compelling alliance of partners to share business and cost synergies that are driving benefits straight to the bottom line,” he adds.

“We have developed our global network significantly, and in doing so, shared massive cost synergies that demonstrate a commitment to work together to reach our goal. We invested time, effort, resource and manpower to initiate, drive and develop these relationships.

“The introduction of non-stop services between Belgrade and the Big Apple is a terrific achievement for Air Serbia that underlines its progress so far as well as the strength of its business strategy.

“On top of that, it demonstrates the benefits of Etihad Airways Partners, whose member airlines provided support every step of the way, with Air Serbia pilots undergoing training in Rome with Alitalia, the cabin crew completing service and safety training in Abu Dhabi with Etihad Airways, and the A330 being leased from Jet Airways,” Hogan concludes.