Speaking during the A4E CEO Summit in Brussels on Tuesday, easyJet CEO, Carolyn McCall, shared her views on the impact to the airline industry and on air travellers of the recent vote in favour of Britain leaving the European Union.

McCall spoke both as the CEO of the British Low-Cost carrier, and as a member of the Airlines for Europe (A4E) airline association. A4E’s members serve 60% of Europe’s air travellers.

“Nothing will change overnight. Much depends on the new agreement the UK will reach with EU member states,” she said. “The aviation industry knows how to overcome challenges and deal with change, and that is exactly what we will do.”

The most important priority now for the airline members of A4E, McCall said must be to focus on ensuring passengers continue to benefit from a “liberalised and deregulated aviation market.”

For Europe’s airlines—including British carriers now finding themselves outside the union by popular vote—the concept of European unity endures.

“A4E’s goals remain the same,” McCall said. “It will continue to focus on uniting European airlines to promote changes which increase competitiveness and result in lower fares and more choice for passengers.”

She described ATC strikes as “one of the most damaging issues facing passengers and airlines today,” saying there is “no process in place, legislative or otherwise to tackle it on a European level.”

“We are at the mercy of unreasonable and disproportionate strike action, and our passengers lose out.”—Carolyn McCall CEO of easyJet.

“Speaking purely from an easyJet perspective, two-thirds of our flights cross central European airspace, so any disruption in that area has a knock on effect throughout the network,” McCall added.

But while easyJet’s CEO focused her speech primarily on A4E agenda items, downplaying the matter of Brexit, the airline is now addressing market challenges.

The Weight of Brexit

As IATA revealed last week, easyJet’s traffic is disproportionally dependent on UK-EU traffic, compared to Ryanair which has a larger portion of its traffic allocated to service within the European Union. 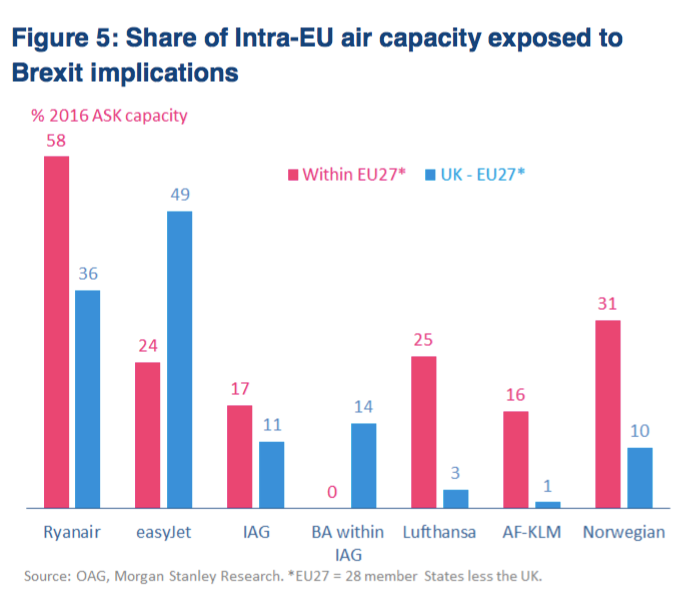 The uncertainty regarding future impact from the Brexit on the British Economy and the travel plans of British citizens; as well as ongoing air traffic disruption from traffic congestion in Gatwick, severe weather and ATC strike actions in Europe, led easyJet to issue an earnings warning this week.

Ryanair’s CEO, Michael O’Leary, meanwhile said the airline would now pivot its focus on service within the European Union.

This follows previous promises to reduce investment in Britain should the Brexit vote succeed, but Ryanair is also addressing the increased competition from other Low-Cost leaders in Europe–WizzAir in particular.

Aviation will likely feel turbulence from Brexit for a few years, but the next big holiday could be proof of damage, mild or severe.

Ryanair proved its committed to Europe on Thursday by announcing the launch of 4,500 extra flights for Christmas.

“The countdown to Christmas is officially underway with less than 6 months to go,” said Ryanair head of communications Robin Kiely. “Last Christmas, Ryanair carried over 5 million customers over the festive period and we’re ensuring even more customers will be flying home for Christmas on the lowest fares once more this year. We’ve added over 4,500 extra flights across our entire European network for the Christmas holidays, with an additional 850,000 seats now on sale on the Ryanair.com website. Season’s greetings to all our customers.”

It’s true that we are now past the halfway point to Christmas, but the timing of the sale feels like a reference to the popular English idiom about fowl voting in favour of the holiday.