Airline Ancillaries Reach $26 Billion, But Could Grow If Airlines ‘Get’ Exclusive

IdeaWorks and CarTrawler have released their list of Top 10 airlines in Ancillary Revenues revealing that the best ancillary yields have now doubled since 2008.

United Airlines is in the top position again this year, having earned $6.19 Billion of the $26 billion the top ten airlines made this past year from “extras.” 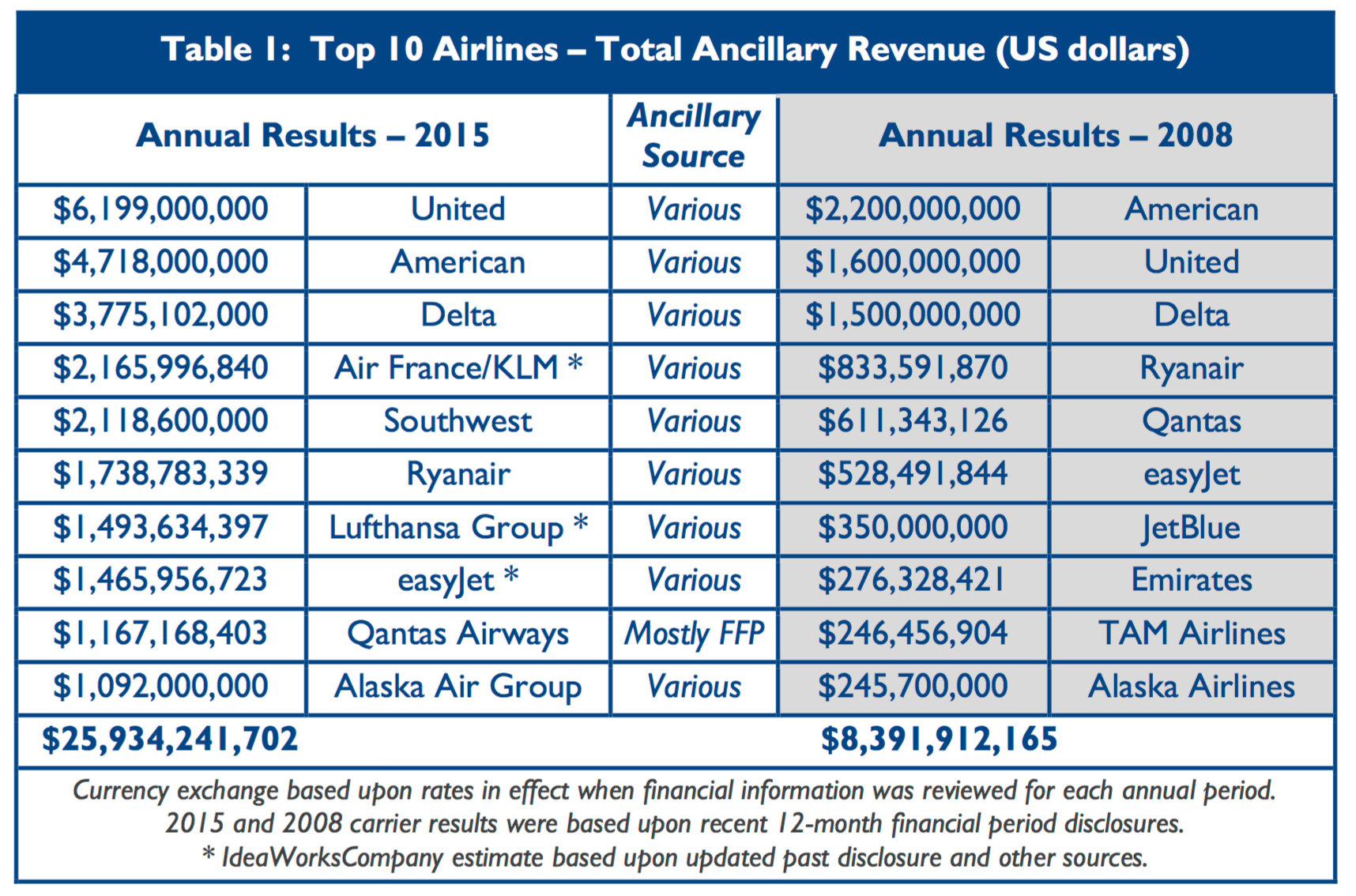 Low-Cost airlines still lead in ancillary sales as a percentage of total revenue, with Spirit at the top of the list making 43.4% of its revenue from ancillaries—$51.80 from every flyer.

In their report on 2015 performance, IdeaWorks and CarTrawler suggest that consumers generally welcome the unbundled services options—despite some griping in the public forum which has even led some politicians to suggest policies tantamount to re-regulating the industry.

“Consumers embrace these a la carte methods; what else would explain how Spirit has grown from 5.5 million passengers in 2008 to nearly 18 million in 2015? Add up the slices of the pie in the adjacent chart and you will see how Spirit reaches the magic number of 43%. Most of the other airlines in the top ten list deploy similar methods to encourage consumers to spend above the base fare,” the report states. 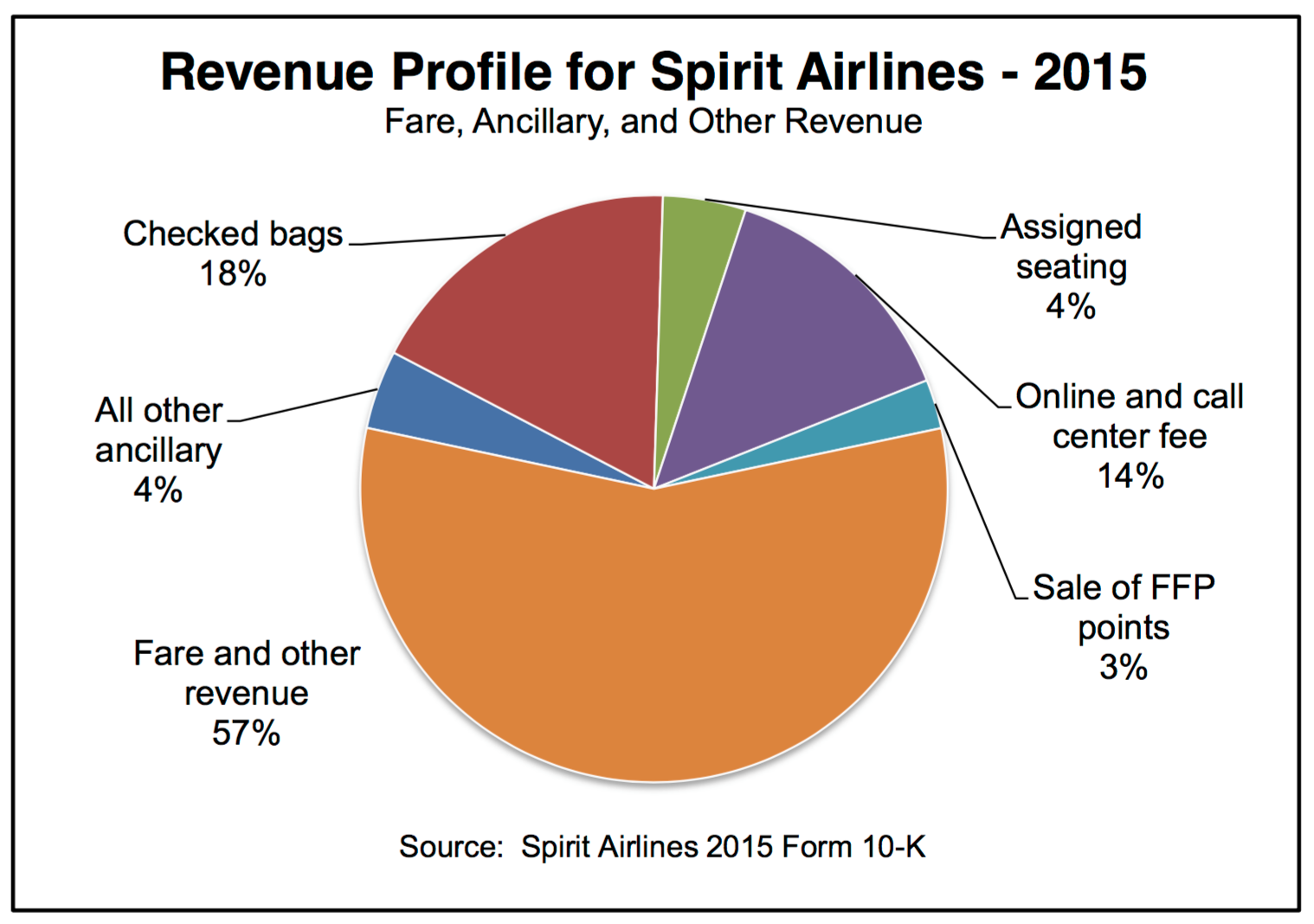 But while these numbers are impressive, airlines can improve their ancillary retail revenue strategies by shifting their focus from “punitive” extras (like baggage fees) to more “pleasurable purchases” like ground transport, hotels and destination activities.

“Airlines can now choose from an ever more sophisticated range of ancillary products and technology,” says Michael Cunningham, Chief Commercial Officer at CarTrawler.

“The challenge is to ensure that the ancillary benefits do not overshadow the core principles of customer experience that airlines have built their brands on. The opportunity is to deliver a personalised offering that complements their brand promise. Airlines that do this will see ancillary revenue gains, increased brand loyalty and a boost in customer lifetime value,” he says.

A question remains whether the sale of loyalty credits (frequent flyer miles or points) to credit card companies and other partners still works. These sales contribute greatly to ancillary revenue, but they also introduce an element of risk.

“This is a big issue in the loyalty world now,” Jay Sorensen, President – Product, Partnership and Marketing Practice at IdeaWorks tells Flight Chic. “Earned loyalty—the hard way—and paid loyalty through buying upgrades. Immediate cash is always king and paid upgrades will grow in prevalence. There has been a major benefit tossed to high yielding corporate fliers as accrual is now based upon the amount paid, not the miles flown. That applies for America, Delta, and United and soon will also apply for their partners in Europe and elsewhere.”

Airlines are re-thinking the structure of their frequent flyer programs, and major carriers—including American Airlines, Delta, and United—are moving to revenue-based awards.

This is a positive step forward for high-revenue flyers, who are loyal to the brand and show that loyalty by buying tickets at full value; but it devalues the awards for loyalty-collectors who take advantage of partnerships with other airlines and hotels, and especially of credit card sign-up bonuses for relatively “free” perks.

Sometimes these two types of frequent flyers are the same individual. There are frequent-flyers who are also “loyalty gamers” taking advantage of every loophole to boost their loyalty status.

Other times, VIP flight services go to loyalty program hobbyists who watch for every deal, use every credit, and get high-tier member perks, but they never buy a ticket.

That a global community has grown around helping flyers find those loyalty membership loopholes speaks to the value of the products on offer. They are prized enough for enterprising individuals to find convoluted and sometimes life-altering ways to enjoy them for “free.”

During the many years since loyalty programs began when load factors hung somewhere between poor and dismal, filling up premium seats and generating a desire for other premium services made a lot of sense. Selling miles or points to credit cards and other membership partners generated revenue and built up the “cache” of loyalty status.

If loyalty is as easily bought as it is earned, then problems arise, including the lost revenue of premium seats in a market where load-factors are high, and the breach of exclusivity in certain premium lounges.

I can hear shouts of elitism as I write this. Of course, this is an elitist perspective!

Let’s remember that membership programs are elitist—by definition. That is their inherent value. The desire to have what others cannot is what makes reward schemes popular—as is getting recognition for money spent.

The revenue airlines earn from their loyalty programs has given birth to an industry within an industry.

It’s unimaginable to walk away from this kind of money. (Repeated intentionally for emphasis.)

But airlines don’t have to, if they can strike a balance between the valuation of this “privilege currency,” without putting off that combination of flyer/gamer.

But selling the asset—even at a discount—is still in many ways preferable to “giving it away.” Again, this is true because demand has grown, because load factors are up, and because the number of flyers will balloon over the next two decades.

I’ll leave you (airlines) with this controversial thought: loyalty isn’t about getting customers to fly with you anymore. It isn’t.

People need to fly today. The bulk of passengers are going to buy a ticket—possibly on your airline—and they’ll make that decision based on a host of factors which have little to do with the miles you offer. Only 13% of travelers will be influenced by your loyalty program, according to IATA.

There will be enough flyers to go around anyway.

With the massive industry consolidation that has taken place since the 80s, the odds are now in your favor that you fill those seats so long as you manage capacity effectively.

Capitalism at its best: supply and demand.

It is wholly dependent on brand positioning.

Loyalty today is about how much a customer will pay to fly. A loyal customer will dig in her wallet—damn the expense—because she knows there is inherent value in the product and service on offer.

That’s a step up from the discount-incentives mentality which first created the loyalty sector in the 90s, in very different market conditions.

It is the same level of real, meaningful, product-love loyalty which gets consumers to buy yet another iPhone, though the last one works perfectly-well-thank-you.

Ah, but you have to wait-list. You have to beg. You have to know somebody who knows somebody who can get you half a chance to maybe buy a ridiculously priced handbag which you’ll only use to show off and most of your friends will assume is a fake anyway.

Power to the People Who Pay

One of the best things to come out of the last forty years of commercial aviation has been the democratization of air travel.

We should celebrate and encourage it. But there’s no need to dilute the value of Premium services just to get more people to fly anymore.

To the contrary: the more premium is preserved, the better the revenues, the more likely those future seven billion passengers will all find a satisfactory passenger experience onboard.

Someone has to pay to improve air travel and that someone should be whoever can afford a First class ticket. (See! Democracy in action.)

This increased value for the product offered, will improve loyalty program revenue (because the currency value rises) and make the program desirable to partners (because higher revenue/spending customers will take advantage of them).

The collectors and gamers will continue to collect and game and gripe–because it’s their hobby and they love to travel. Loyal corporate customers aren’t going to jump ship because of miles, but they may if they don’t find value in the services offered.

Allow me to share just a little of my personal travel story.

I’ve signed up for whatever programs are offered. I hold a loyalty-branded credit card for one airline I frequent, and often use that same card to buy tickets on that airline’s competitors who offer a cheaper fare. Win-dash-Win!

I will use miles to fly for free as soon as I’ve accrued enough points for my itinerary—or use them towards the purchase of a ticket.

I’ll fly economy 99.9% of the time, but I will bid for an upgrade on a long-haul flight.

I like the notion of choosing how much extra I’m willing to pay for comfort, and let chance decide whether that is enough. I generally bid low. I don’t win an upgrade often.

In fact, it’s a very democratic feature because it gives me an opportunity to get a deal for the front–without having mileage status. It’s the perfect compromise.

I never upgrade for free these days because I have not been sufficiently loyal to any of my airlines to earn that status.

I don’t care for status. I’m in no rush to board. If I really want the lounge, I’ll pay a day pass.

That’s me today. The cheapo writer.

The old me was an affluent corporate flyer.

I paid full fare for plenty of premium tickets, and used points for nice hotel stays free of charge.

I paid expensive stays at hotels, and used miles from that to fly free in premium cabins. I went on shopping excursions and flew free in first to get there, using accumulated card points. My hotel stay was often also free.

I shopped fare deals and used frequent flyer status to fly first class while paying a discounted economy fare. I gamed the system, without the level of sophistication of some today, but enough to amuse me.

I’ve looked at loyalty from both sides now, the highs and lows and still, somehow, it’s the special treatment in all classes I recall.