Hi AvGeek pals! Y’all got to see this.

Many airlines have done great things to mark the flight bringing their Olympic champions home, but this one is just a particularly thrilling ride.

The Dutch Olympic athletes flew on #Orangepride a livery dedicated to promoting the culture of The Netherlands which was revealed this past King’s Day and is a delicious blend of sky blue and orange.

Did you know that because these two colours are complementary KLM’s blue turns orange and its orange turns blue? Check it:

British Airways decorated the VIP charter aircraft bringing the British athletes with a gold nose cone assigned it flight number ‘BA2016’ and  emblazoned ‘victoRIOus’ on the side as well as the ‘#greattobeBAck’ hashtag which both the fans and athletes were encouraged to use on social media.

Alex Cruz, Chairman and CEO of British Airways, said: “We’re excited to be bringing the athletes home ‘happy and glorious’ following the Games! victoRIOus is a very fitting name, reflecting the great pride we have for our sporting heroes, and is a great play on words too.”

Iberia didn’t let its team down with VIP service onboard and a really nice cake.

Welcome home! So proud of the Spanish Olympic Team, for making us reach the sky in #Rio2016. See you at #Tokyo2020! pic.twitter.com/mgzJYmD8L9

The German Olympic team returned home, at Frankfurt Airport on a Boeing 747-8 specially branded in a custom “Olympia Siegerflieger“ design. 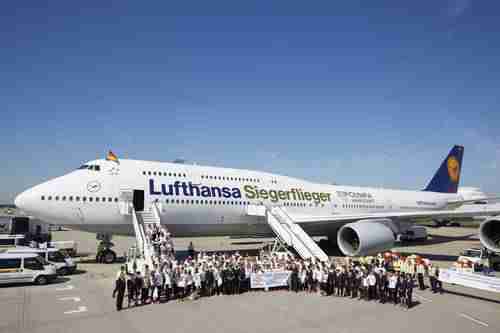 KLM’s partner Air France put together an entire YouTube series of the French team’s journey to Rio and back home again.

And Schiphol Airport did its part for the Dutch team’s arrival: