The latest Ideaworks and CarTrawler study of ancillaries sales has been published, revealing that Qatar Airways is good at Duty-Free sales making $528 million in 2015 through the airline’s Qatar Duty Free operation.

It begs the question, could happy passengers be more prone to shop onboard?

Qatar Airways pampers customers throughout the journey, and has carefully crafted a luxury image. Perhaps this encourages a shopping behaviour. Others have suggested there is a correlation between passenger happiness at the terminal and likelihood to spend more on luxury goods at Duty Free shops.

But Qatar Airways’ significantly higher figures suggest that other factors are at play: shopper-friendly routes, crew salesmanship, and the selection of products on offer, for example.

For a little perspective on the magnitude of Qatar Airways’ Duty Free sales, compared to competitors, Ideaworks shared numbers with Flight Chic of other top performers.

These figures are important because the emotional association with these sales differ significantly from other airline ancillary earnings. Baggage and seat change fees are punitive. A-la-carte FAB (Food and Beverage) can be seen as positive or negative, depending on customer expectations of a free meal. Miles are a fun game, but a bit intangible. Duty Free, though, is a tangible pleasure buy.

So what makes you spend more on Duty Free when you fly? Here’s a quick survey:

Other notable ancillary earnings figures from Ideaworks and Car Trawler’s latest report for 2015 include:

But the big winner on ancillaries was United Airlines, which took the number one spot worldwide with $6.199 billion. This included mileage sales of $2.999 billion for 2015, most sold to Chase Bank for the MileagePlus co-branded credit card. 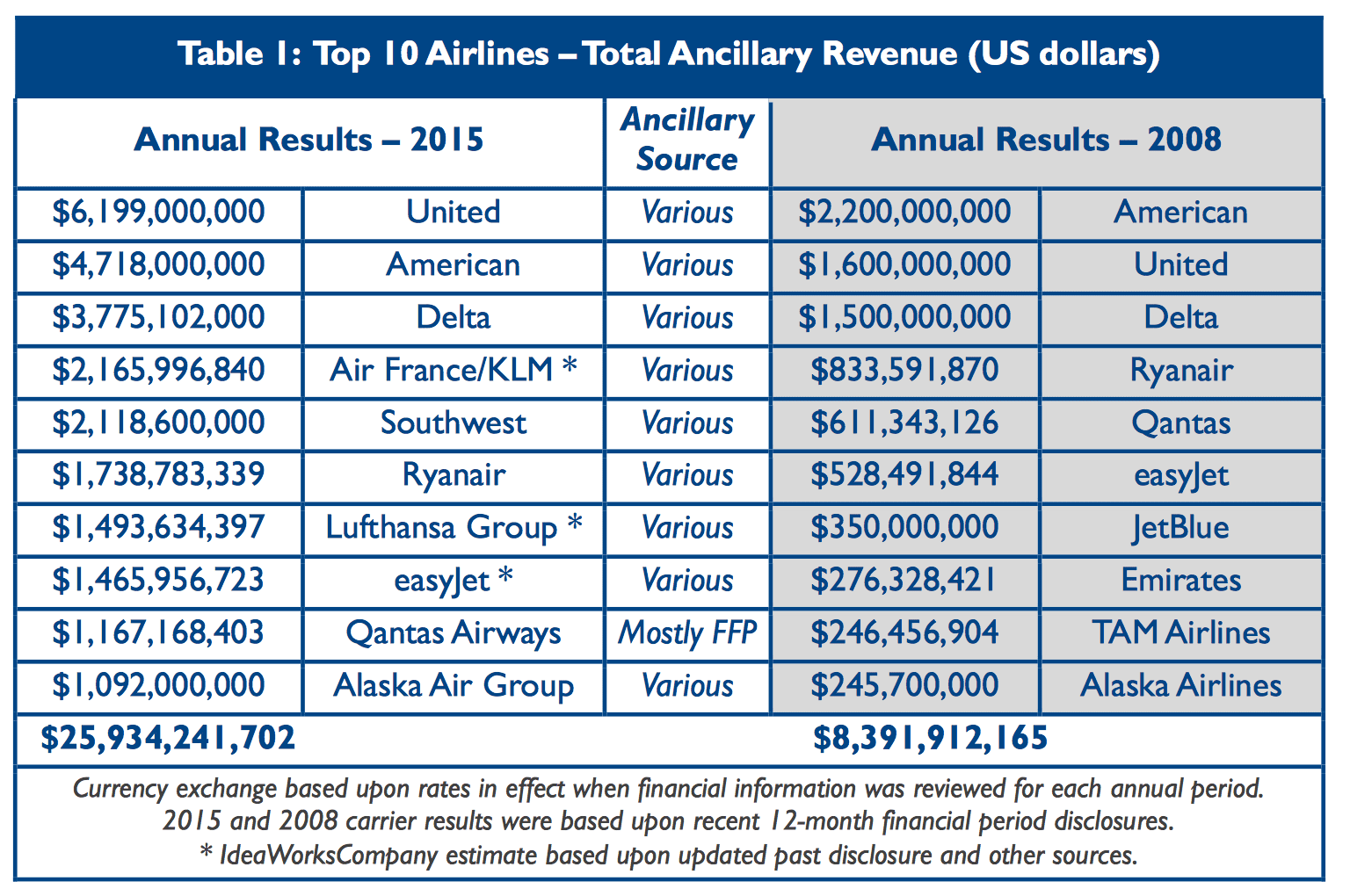 Other sources which contributed to United’s impressive ancillary numbers were bag fees, and the United Economy Plus cabin offering.

Perhaps the most promising element of Ideaworks and Car Trawler’s latest study is that it shows a marked improvement for the industry overall in generating revenue from sources other than airfares.

With legacy carriers still competing against low-cost carriers for customers—especially now on their previously privileged long-haul routes—developing alternative sources of income will more than make up for losses from fares discounting. In some cases, per-passenger ancillary earnings may be higher than the deeply discounted fares some LCCs offer in their promotions. 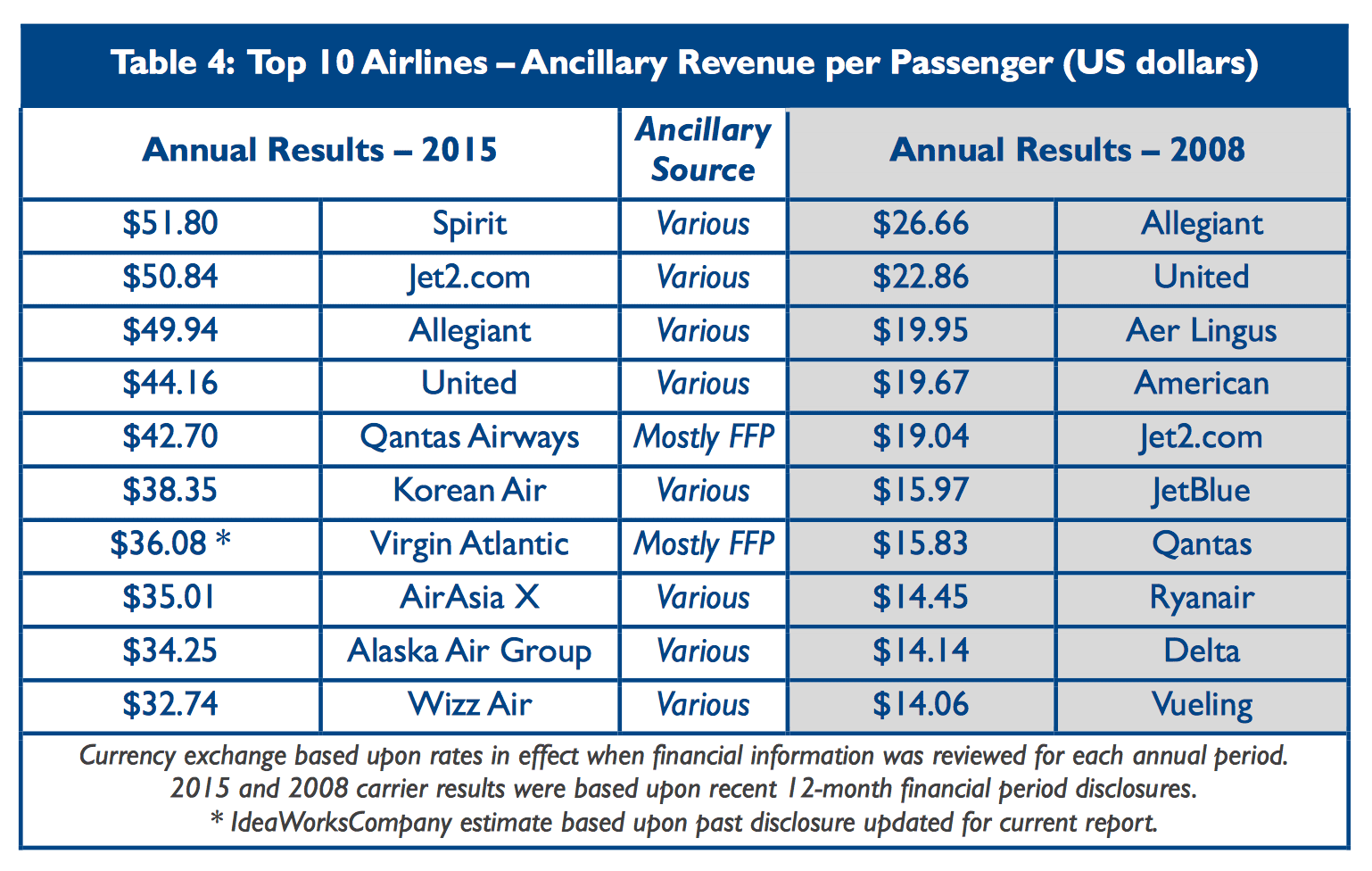 Airlines are becoming smarter retailers, and they are clearly benefiting from it. Ideaworks and CarTrawler expect airlines to get even better at this in coming years.


“There is plenty of activity to suggest ancillary revenue will continue to grow in total, as a percent of airline revenue, and on a per-passenger basis,” Ideaworks and CarTrawler state in the report.

Keeping passengers happy–so they are encouraged to spend extra on goodies–can’t hurt!