The International Air Transport Association (IATA) is warning against protectionist tactics as demand for air travel increases over the next two decades.

“People want to fly. Demand for air travel over the next two decades is set to double. Enabling people and nations to trade, explore, and share the benefits of innovation and economic prosperity makes our world a better place,” said Alexandre de Juniac, IATA’s Director General and CEO.

IATA’s forecasts show the biggest driver of demand will be the Asia-Pacific region, which will be the source of more than half the new passengers over the next 20 years.

Developing markets will also continue to drive growth in the airline industry.

“Economic growth is the only durable solution for the world’s current economic woes. Yet we see governments raising barriers to trade rather than making it easier. If this continues in the long-term, it will mean slower growth and the world will be poorer for it. For aviation, the protectionist scenario could see growth slowing to as low as 2.5% annually. Not only will that mean fewer new aviation jobs, it will mean that instead of 7.2 billion travelers in 2035, we will have 5.8 billion. The economic impact of that will be broad and hard-felt,” said de Juniac. 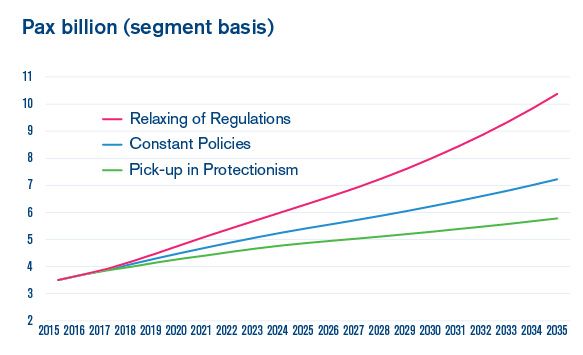 Key facts (all figures based on central growth forecast)

The top ten fastest-growing markets in percentage terms will be in Africa: Sierra Leone, Guinea, Central African Republic, Benin, Mali, Rwanda, Togo, Uganda, Zambia and Madagascar. Each of these markets is expected to grow by more than 8% each year on average over the next 20 years, doubling in size each decade.

Infrastructure Will Be Critical

Whichever of these growth scenarios ultimately comes to be, the airline association warns of another industry vulnerability which could negatively impact air traffic growth: inadequate infrastructure.

“Runways, terminals, security and baggage systems, air traffic control, and a whole raft of other elements need to be expanded to be ready for the growing number of flyers. It cannot be done by the industry alone. Planning for change requires governments, communities and the industry working together in partnership,” said de Juniac.

IATA says that today’s infrastructure is already struggling to keep up with demand and matters will worsen if there are insufficient actions to improve the flow of air traffic.

Some projects are underway at airports around the world to increase capacity, but others which have long awaited approval to support higher passenger numbers, such as Heathrow and Gatwick, remain mired in political debates. It is expected that an announcement will be made on Heathrow this week, but arguably even allowing for growth at that airport might be insufficient to meet future demand.

Air Traffic Management is also problematic. There are weaknesses in the technology used to track planes and keep them on track, and projects underway to upgrade those systems are still ongoing. The FAA’s NextGen program is moving forward, but always at risk from lack of funding of the agency. In Europe, upgrades are planned but complicated by sovereign airspace issues and the status of technology on the ground. The Single European Sky is still an unrealized dream, despite heavy lobbying from IATA and the newer airline association A4E.

IATA has previously predicted that airspace modernisation could yield a €245 billion boost in prosperity to Europe by 2035.

There are also expensive complications in Europe from ongoing labour disputes with Air Traffic Controllers, leading to strikes. Ironically, ATC workers are often striking to protest they inadequacies in present air traffic management technology. However, repeatedly voicing these complaints through job walk-outs has resulted in 131,000 lost jobs in Europe and a reduction of European Union GDP as high as €9.5 billion, according to a study conducted by PwC.

This growth will also need to be environmentally sustainable. With the establishment of a Carbon Offset and Reduction Scheme for International Aviation (CORSIA), the industry hopes to manage the environmental impact of aviation and cap net emissions with carbon neutral growth from 2020.

“Aviation is at the forefront of industries in managing its carbon footprint. Along with offsetting emissions through CORSIA, airlines are working with partners in industry and government to advance technology, improve operations and generate more efficiencies in infrastructure,” said de Juniac.

But there is another factor to consider which impact both the infrastructural vulnerabilities and environmental impact of aviation in future: fleet planning.

At this point the industry seems to be leaning away from a hub-and-spoke service model, supported by smaller aircraft on short-to-mid-haul routes which bring passengers to larger aircraft for long-haul routes. The rise of long-haul radius narrow-body smaller aircraft is opening up more opportunities for point-to-point service over the oceans. Low-Cost airlines, which have based their business models entirely on a single aircraft type (or two) and point-to-point service, while offering lean fares structures have put pressure on legacy full-service carriers to which many of these carriers have responded in kind: limiting services offered onboard, lowering fares even if the lower fares are unsustainable, and moving to point-to-point models.

There are advantages to point-to-point, especially in terms of route flexibility. It’s easier to move a single flight city pair, adjusting dynamically to demand, than to break up a complex network. But more planes is still more planes.

Larger aircraft, some of which are becoming more efficient, can serve mega-cities more efficiently. This is what Airbus argues when defending the long-term prospects of its A380 program, which has seen a decline in orders and a reduction in production.

This matter is not clear-cut. There are sound arguments for and against both operational models, which leads me to believe that, very much like IATA’s growth projection models, the answer will lie somewhere in the middle.

The industry drive to be all things to all people–with legacy carriers trimming themselves to the bone to oust low-cost insurgents, and using protectionist strategies to defend their most profitable markets–is also unsustainable.

There can only be so much industry consolidation before a new weaknesses arise: lack of choice for consumers and excessive influence on regulators and legislators from mega-airlines. These two are equally dangerous.

Therefore, logic dictates that fresh competition and alternative service models should be encouraged according to market dynamics. Large airlines should be allowed to fail, according to those same dynamics.

We might find the prospect of losing flagships and other large carriers harrowing, but no less shocking than having lost PanAm or Eastern years ago. The market ultimately adjusted to the gap. While some of that adjustment came from other legacies absorbing the market, not all of it did. The market gap also fostered the growth of low-cost carriers which serve growing numbers of price sensitive travellers, and inspire more people to travel by air.

The key concern of emerging fleet strategies is not just that they might encourage excess capacity at some airlines, but that they will also artificially inflate demand for aircraft.

Of course, we want to see aircraft sales. They support jobs and help the economy. Seeing modern more efficient aircraft replace less environmentally friendly planes is also a positive sign. But eventually planes must be de-commissioned, their interiors ripped out, their components recycled. We need to worry about having too many of those on our hands too.

While the jumbos may be out of fashion now, I believe as Airbus does that large aircraft are key to sustainable growth.

But to reap the benefits, today’s airlines will need to decide on a market niche and stick to it. An airline which decides to specialise in long-haul hub service, as Emirates has done very successfully, can easily gain efficiencies from these larger planes.

The problem is ego.

Some airline CEOs cannot bear losing out any market share to a competitor, even if walking away from that market share would be beneficial to the airline over the long term. This is an old problem in an industry where testosterone often clouds thinking.

I’ll give you a quick example from just this Monday of how an airline might respond differently to market conditions.

EasyJet has announced that it would pull its Copenhagen Luton service next year, because it is generally unsustainable. It will also reduce frequencies on Copenhagen-Gatwick service to better match demand. This must have been a difficult decision for easyJet to make. After all, Luton is the airline’s headquarters.

Though Copenhagen-London services are highly contested between SAS, British Airways, Norwegian, easyJet and Ryanair, the only competition easyJet had on flights to Luton is Ryanair.

Ryanair immediately responded to the easyJet gap with a crazy fares sale starting at DK69 (under ten pounds sterling).

This was a game of chicken, and easyJet was first to turn.

But by Tuesday, Ryanair issues a profit warning due to a weaker pound.

Don’t get me wrong, Ryanair can get away with this stuff because its business model would arguably support free tickets (plus all the extras).

EasyJet is at a disadvantage by operating as a UK-based airline, with associated operating costs.

But what’s important is that Dame Carolyn McCall had the good sense to consider the longer term impact of being distracted by a price war with Ryanair only to win a few seats in Denmark.

She put any ego aside, and decided to stay true to the business model which works best for easyJet: a good price, but not at any price.

If aviation is to continue growing, then industry egos should take a lesson from McCall: put on your orange trainers and walk away from bad deals, bad revenue, unsustainable markets. Be what you are and be the best at that.

Otherwise, all this growth could easily turn to loss.