This month, Facebook IQ published a new loyalty study entitled ‘Love in a Time of Infinite Choice’ which reveals the strong advantage airlines have over hotels and other non-travel services and retailers to differentiate themselves, build loyalty, and reap profits.

The results show that airlines could win over more consumers if they stopped commoditising themselves, find their market, and build brand fans with quality product and services.

Facebook surveyed 14,700 adults in the US and posed questions on their loyalty to companies in five verticals: Auto Insurance, Airlines, Hotels, Grocery and Restaurants.

The variety of verticals makes the study extremely useful because it includes both needs and wants. One can compare results from verticals which supply somewhat unrelated products or services and infer the emotional engagement to airlines, which can be classified as a want but not a need.

The qualities which drive loyalty purchases “Brand Loyalists” and repeat purchases for other reasons “Repeat Purchasers” are illustrated in this graphic:

We can make a number of important observations about consumers’ relationship to airlines based on this data, many of which are surprising.

As Facebook writes in the report: price Matters but experience matters more—regardless of consumer income.

The importance consumers place on these values to build loyalty and repeat business is further highlighted in the loyalty word-cloud Facebook presents in its study. Notice the relative weight of quality and fun versus affordability or even reliability.

Why is it that consumers generally like JetBlue despite the airline’s weather disadvantage which keeps it lower in the USDOT rankings of on-time performance? Why does Emirates do well, disadvantaged as it is in on-time performance by complications with connections and sandstorms? This could shed some light on those questions.

I don’t mean to take away the importance of arriving and taking off on-time nor the brand impact of inconveniencing customers. I’m only suggesting that if airline customers are pleased with their surroundings, have the expectation of a good time, and receive good service during disruptions, they may be less troubled by delays which are outside an airline’s control. 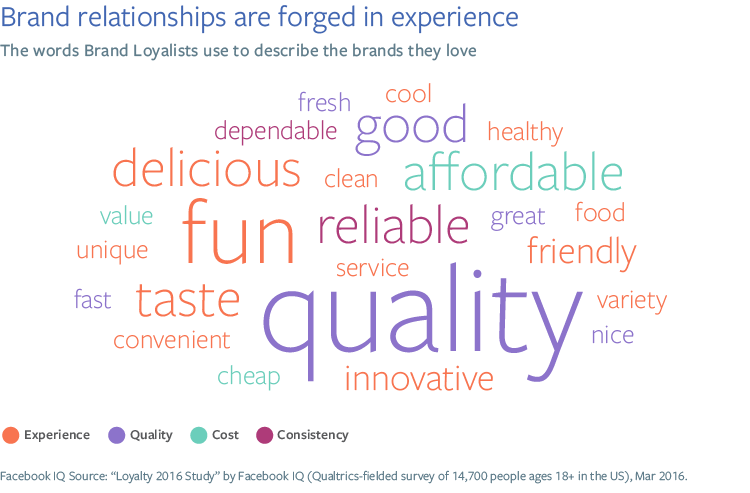 Though by necessity I write a lot about Millennials—they are the generation which launched a bazillion articles—I’m not terribly comfortable with the word.

I’m not that eager to jump on Boomers or GenXers or GenZ either.

While these labels hang from the tree for easy-pickings, I believe they are overly simplistic and somewhat deceptive. One cannot say that any generation of humans is motivated by exactly the same thing. We’re all too different.

There is arguably a certain generational “culture,”and socio-economic drivers which might at times influence similar behaviour, but we should be more sparing with these statistics than salt.

That said, your opinion may differ. Facebook studied the “unique barriers to loyalty” of this large generation of people, and you might enjoy knowing those so here are the results:

Millennials need to feel they can contact an airline or hotel easily before they build loyalty to a brand, but it is significantly more important that they can reach an airline than a hotel. And ease of contact for airlines is nearly as important to Millennials as the hygiene of their grocers!

Because many Millennials are engaged in social media, airlines which satisfy these needs are not wasting their time or resources.

Of course, there are other ways for brands to be approachable (Messenger, apps, SMS notifications). I expect we’ll see those evolve and mature soon, but I think social media will continue to play an important role until GenZ rises to predominance and rolls its collective eyes.

(I had an interesting conversation with an older GenZ-er yesterday who believes social media is a joke, fake, deceptive, unreliable and best avoided. She’s really into chatting with friends and family on WhatsApp, though. Maybe she’s just odd.)

We’re Not Kidding Around

I’ve also suggested in a number of articles that the best way for airlines to nestle in the hearts of customers is to treat their children like VIPs.

42% of New Parents describe themselves as loyal compared to 36% of non-parents.

“New Parents are particularly more loyal in verticals that might not trigger as much loyalty in non-parents, such as Hotels. This is especially true of verticals with products and services that tend to be more experiential. We think it’s because a desire to experiment gets replaced with a desire to stick to what they know. After all, a restaurant’s food might not seem as important when parents start thinking about stroller access and crayons at the table.” 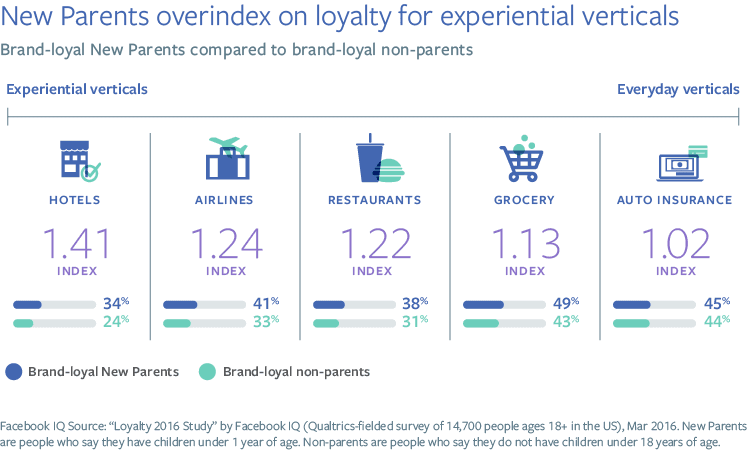 Airlines should get busy making little ones happy: they build loyalty with parents, and they build brand rapport with future decision-making adults.

Hat tip to Sabre and Tnooz for making me aware of this report.