Members of Parliament have called for a reduction in the APD of 50%.

Pushing for the abolishment of what they describe as unfair taxes on aviation is cornerstone to the agenda of Europe’s newest and most vocal airline association.

The Chief Executives of the UK’s three largest airlines claim the APD hampers Britain’s economic growth, business and tourism. They emphasised that in a post-Brexit economic climate, global business links should be strengthened.

Since the introduction of the ADP 21 years ago, the UK Treasury has raised more than £31 billion from this passenger tax. In 2015 alone, APD raised over £3 billion from nearly 110 million passengers.

“APD damages the UK’s competitiveness and jobs,” said Willie Walsh, CEO of International Airlines Group (IAG). “It’s a revenue raising tax designed to suppress air transport growth which is exactly what the economy does not need right now. Britain spends many millions of pounds attracting people to the country only to charge them up to £146 when they leave. Other countries which have scrapped their aviation taxes have seen an immediate boost to their GDP and tourism. Why saddle businesses and tourists with a tax that your European competitors do not have? APD is well past its sell-by date and must be scrapped.”

The airline group points out that other European economies have benefited from eliminating their passenger tax, citing examples of the Netherlands and Ireland which have both since reported strong passenger growth. Supporters of the move to eliminate the APD argue that the UK’s hubs will lose increased shares of their markets and their leadership position in the region as passengers opt to travel through other airports.

The association has also prepared an infographic which to help illustrate the impact of this tax and the economic benefit of eliminating it. 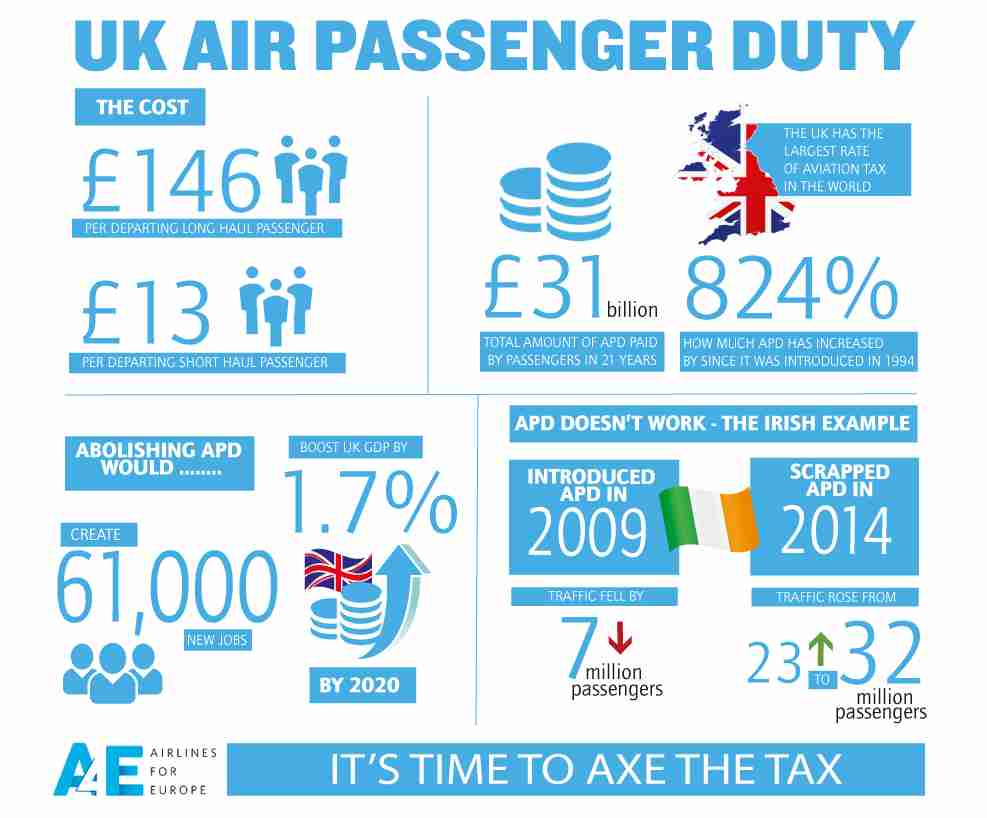 A4E is not the only group fighting against the passenger tax, even outside of aviation bodies. In a report published this summer, ‘Gate Now Closing,’ the British Infrastructure Group (BIG) wrote:

Britain’s major aviation tax, APD, is many times the rate of similar taxes in European competitors and trading partners such as the USA. In fact, the tax rate is higher than in any other country except Chad. APD hinders exports, distorts the market, and hits small carriers hard. As the UK seeks to forge new trading relationships post‐Brexit, we can’t afford to maintain any barriers to trade, including APD. BIG believes that a lowered rate, by boosting the wider economy, would eventually be cost‐neutral for the Treasury.

BIG has recommended the immediate reduction and ultimately the elimination of this passenger tax, but airline leaders feel that the benefits of abolishing it in today’s economic climate would justify doing so immediately.

The airline group details the costs to passengers of this duty, which also discourages sales of long-haul tickets. Short haul passengers pay £13 for every departing flight from the UK, but this rises to £146 for long haul passengers. It is therefore more economical for UK passengers to take budget short-haul flights to other European airports use those as their international hubs. This fee on long-haul service is due to increase to up to £150 next April, which the airline association says places a greater cost-burden on British businesses and tourism, and makes Britain more expensive for consumers and visitors.

Quick Figures on ADP from A4E:

“At easyJet we are proud to help bring people to the UK and, like the Government, we want the UK to be open for business,” said Carolyn McCall, CEO of easyJet. “Removing APD, a tax on passengers that suffocates demand, would certainly stimulate economic growth and make travel easier and more affordable. There is so much evidence to support this in other countries.”

“It is not just visitors to the UK the tax affects—people travelling between London and Edinburgh for example are currently being hit twice as hard by paying £13 each way on the flights. So, removing APD could also strengthen the connections within the UK,” she added.

Michael O’Leary, CEO of Ryanair cited the benefits to Ireland’s airports of Ireland doing away with its own passenger tax two years ago.

“The introduction of a travel tax in Ireland in 2009 caused passenger numbers at Irish airports to collapse by almost 25 per cent, from 30 million to 23 million over four years, damaging tourism and inhibiting growth,” he said. “Thankfully, the Irish Government scrapped this tax in April 2014, which resulted in immediate traffic and route expansion at Irish airports, where Ryanair has grown strongly, and an influx of high spending tourists to Ireland, with passenger numbers reaching record levels (from 23 million in 2012 to 32 million in 2016). We call on the UK Government to follow the Irish example and scrap APD for everyone, to allow Britain to become competitive and stimulate job creation and tourism.”