In a joint press conference today in Abu Dhabi, Etihad Aviation Group and Lufthansa Group announced the new terms of their collaboration. It includes large contracts for LSG Sky Chefs for catering and Lufthansa Technik for MRO services, resulting in a very profitable venture for the German airline group.

Etihad has signed a four-year catering contract with Lufthansa’s LSG Sky Chefs to provide catering services to Etihad Airways in 16 cities in Europe, Asia and the Americas. 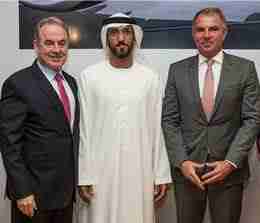 Etihad Aviation Group and Lufthansa Technik (LHT) also signed an MoU to explore cooperation in maintenance, repair and overhaul services across Etihad Airways and its airline equity partners, and opportunities for synergies with Etihad Airways Engineering.

Etihad Airways and Lufthansa have said they are exploring further cooperation in freight operations, procurement and passenger services, and other areas to improve their competitive offering globally and in the European market.

As announced at the end of last year, Etihad Aviation facilitated the wet-lease of 38 Air Berlin aircraft under a six year contract, 33 of which will be operated as Eurowings.

In exchange for these new deals, the Etihad Aviation Group gets an extended code-share partnership and will move to the Lufthansa Terminals at Frankfurt and Munich.

Etihad Airways will move its operations at Lufthansa’s hubs, from Terminal 2 to Terminal 1 in Frankfurt, and Terminal 1 to Terminal 2 in Munich, which will simplify code-share services to passengers of both airlines.

While the deal is very sound for Lufthansa Group, a win on all counts, it reflects a scaling back of Etihad’s to ambitions to form a powerful global group in its own right, a long-term aim of out-going President and CEO James Hogan.

Hogan put a positive spin on the agreement, painting it as an extension of previously stated plans by saying: “Partnerships are at the heart of our strategy and remain fundamental for us to compete effectively and efficiently in a complex and competitive global market.

“Our collaboration with one of the aviation industry’s most established and recognised brands is undoubtedly the most significant non-equity partnership with an airline we have ever announced.

“This partnership is the platform for a much wider strategic collaboration between our two organisations. It demonstrates the commitment of the Etihad Aviation Group Board and Abu Dhabi to our European growth strategy.”

Still to be determined in this new Lufthansa-supported European strategy fate of Etihad Group’s embattled Alitalia.