Skip to Content
Home Aviation Matters U.S. Airports Were the Clear Winners in Trump Meeting, but What’s Next?

Marisa Garcia 4 Comments on U.S. Airports Were the Clear Winners in Trump Meeting, but What’s Next?

U.S. airline and airport leaders met with President Donald Trump at the White House on Thursday.

What follows is a summary of Thursday’s happenings and their implications. 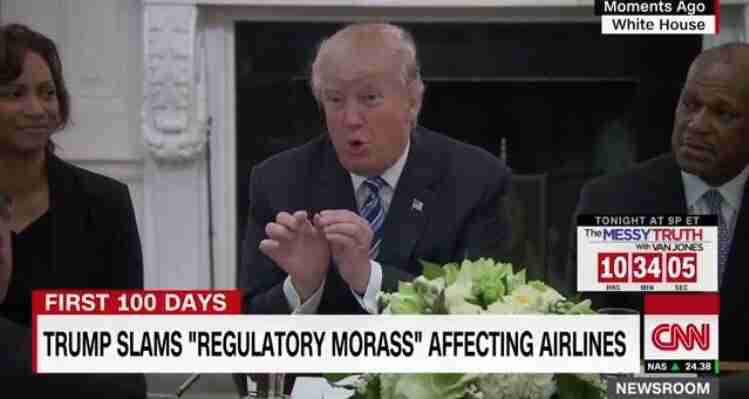 POTUS congratulated airlines at succeeding “despite the bad equipment that the airport gives you, in many cases”

“I have a pilot who’s a real expert,” POTUS said, noting that his pilot has said airlines are often provided with “the wrong stuff.”

“We want the traveling public to have the greatest customer service and with an absolute minimum of delays.”

Trump on the Middle East

“We spent six trillion dollars in the Middle East, we got nothing.” POTUS continued.

“And we have an obsolete plane system, we have obsolete airports.”

POTUS said before the airline meeting began that automakers had praised their meeting with the president afterwards : “They left, they said it was the best meeting they ever had”

“Delta’s doing well.” POTUS quipped to Bastian when he introduced himself.

“We’ll make it number one,” POTUS joked to the head of LAX, who said her airport was the seventh largest airport in the world.

Upon being informed that the Atlanta airport is the largest, POTUS remarked that he loves the state of Georgia.

Southwest spoke first and said the top priority for helping airlines would be to “modernise the air traffic control system” noting that money spent on the system has not helped improve it in the past.

“I hear we’re spending billions and billions of dollars, it’s a system that’s totally out of whack.” POTUS said of the air traffic control system.

POTUS inquired as to why airline corporations had allowed the government to invest in a faulty system. Southwest informed POTUS that the airlines are not “in control” of those decisions.

POTUS said that the system could potentially work better if FAA was run by a pilot because it is not currently, as a meeting attendee confirmed for him.

The FAA has since responded to POTUS remarks on NextGen ATC:

The FAA has spent $7.5 billion in congressionally appropriated funds on the air traffic modernisation program known as NextGen over the past seven years. That investment has resulted in $2.7 billion in benefits to passengers and the airlines to date, and is expected to yield more than $160 billion in benefits through 2030.

NextGen is one of the most ambitious infrastructure and modernisation projects in U.S. history. Its successful, ongoing rollout is the result of rigorous acquisition, program and portfolio management, and stakeholder engagement with the airline industry and other members of the aviation community. The FAA invited airline stakeholders to help develop the blueprint for NextGen and they continue to have a seat at the table in setting NextGen priorities and investments through the NextGen Advisory Committee.

The full transcript is well-worth reading.

While airlines hoped to hear a clear promise that Trump would apply his “America First” strategy to airline policy, encouraging a re-vamp of Open Skies which would protect U.S. carriers in their competition with foreign Low-Cost Carriers and Gulf carriers, the President chose instead to begin the meeting by pointing out that those foreign airlines also contribute to the American economy.

President Trump conceded the point of the Fair and Open Skies Group that some foreign carriers benefit from government funding, but shifted focus to foreign carriers’ aircraft purchases and hiring of staff in the U.S.

The results of this frustrated agenda are reflected in comments issued by the groups following the meeting, which in effect repeat an appeal for intervention and argue the case again that U.S. airlines contribute the most U.S. jobs.

From the Fair and Open Skies Group

“We appreciate President Trump’s time and his attention to the challenges facing the aviation industry,” said Jill Zuckman, chief spokesperson for the Partnership for Open and Fair Skies. “We are particularly gratified that President Trump is focused on longstanding trade violations by the UAE and Qatar that are costing American jobs. With $50 billion in foreign government subsidies to Emirates, Etihad Airways and Qatar Airways, our U.S. carriers are at a competitive disadvantage that is costing American jobs. It’s time to enforce our agreements and stand up for the 300,000 airline workers whose jobs are at stake. We look forward to continued discussions with President Trump and his team.”

Following the meeting, Bastian shared the following: “I appreciate the opportunity to meet with President Trump today along with colleagues from across the industry and look forward to continuing our efforts to make U.S. aviation great. We had a positive discussion about many of the major issues facing U.S. travellers, airline employees and the aviation industry, which is a vital economic engine for America. I look forward to working with President Trump, Secretary Chao, Secretary Tillerson and other members of the administration on issues important to Delta, our employees and our customers. Delta has been leading the charge to expand and upgrade our nation’s airports, with extensive improvement projects planned and underway at major Delta hubs. At Delta, we plan to hire 25,000 people over the next five years with the support of a level playing field globally.”

The Competition Carries On

For now, the decision by the USDOT to allow Norwegian Air International to operate direct flights from Ireland to the U.S. stands. The stipulated period for the President to reverse the order has elapsed. That is not to say that Donald Trump couldn’t backtrack in future, but he has yet to do so.

It also seems unlikely that Donald Trump would frustrate Boeing by taking sides with U.S. carriers against Gulf carriers at this time.

The winning airline in the Trump meeting would be American Airlines whose CEO Doug Parker did not attend.

Parker “already has been in touch with the White House regarding this conflict,” Matt Miller, a spokesman for American Airlines told Bloomberg. “Doug shares President Trump’s commitment to modernising our nation’s infrastructure and looks forward to working with his administration to ensure all Americans have access to safe and efficient air travel.”

Parker appears to have had a keen sense of the limitations of what could be accomplished at Thursdays meeting: promises of better aviation infrastructure and a rolling back of regulations already set in motion through an earlier Executive Order.

U.S. Airports, on the other hand, had good reason to celebrate, if President Trump is to be taken at his word. The comparative length of their full statement suggests that they got the most points in during the meeting.

We greatly appreciate the Presidents persistent, vocal support for building airport infrastructure as a key component of improving the passenger experience, rebuilding our nation, growing our economy, and creating jobs, said Burke. We had a very productive conversation today that focused on our commitment to improving the passenger experience at airports across the United States.

During the meeting, the President stated four times that America must modernise and rebuild our airports, said Burke. We can quickly fund and undertake these much needed infrastructure projects with no federal budget impact by giving airports more control of local investment decisions. We estimate that 2.1 million jobs could be created while enhancing the passenger experience simply by removing federal limits on the local user fee known as the Passenger Facility Charge.

At least one item plaguing aviation and travel in recent days was resolved through a key decision in the U.S. Courts which reverses the President’s problematic Executive Order on immigration. The President has vowed to fight this decision.

SEE YOU IN COURT, THE SECURITY OF OUR NATION IS AT STAKE!