The decision by a United gate agent to require bar two young women from a flight because they were wearing leggings has raised a significant uproar on social media this Sunday. Some accuse United of having out-of-date, sexist rules and responding to comments from the public on  Twitter poorly.

Let’s deal with the issue of contention: the perception that United’s rules are sexist.

Sexism hinges on applying different norms to women than men in like circumstances.

Women are people. They want to be treated fairly. They don’t want to have restrictions or different rules apply to their individual freedoms because of their gender.

Anything that violates a woman’s equal right to safety, dignity, life, liberty and the pursuit of happiness is sexist. The dehumanization and depiction of women as objects or possessions is sexist. The concept that girls and women should be held to more stringent moral standards than boys or men is sexist.

But was this decision sexist?

The witness who tweeted about the incident describes one of the female passengers involved as a ten-year-old girl. The girl was able to put a dress on over her leggings and boarded. She describes the other two as young women, without specifying age. These two young women had no alternative clothing and were not allowed to board the flight with the family. Perhaps we can infer from this that the two girls were old enough to be left behind at the airport alone, though we don’t have the facts.

The witness reports that the father in the group was wearing shorts. Shorts are also casual attire and might have been as “inappropriate” as the leggings the young women wore. At least, this is how the witness perceived the situation.

The father had shorts on. Two young women in leggings booted from flight and a girl had to put a dress on over leggings in order to board. https://t.co/sCCP01gWcA

But as United points out, these travelers were flying with non-revenue staff passes.

This makes a difference. These free tickets come with certain restrictions, including restrictions on wardrobe.

Shorts are allowed for non-revenue passengers, within certain limits. They must not rise higher than three inches above the knee.

I have asked the woman who reported the incident whether she would describe the father’s shorts as complying with these rules. The answer would shed light on whether this dress code was applied without gender bias. I have not heard back. 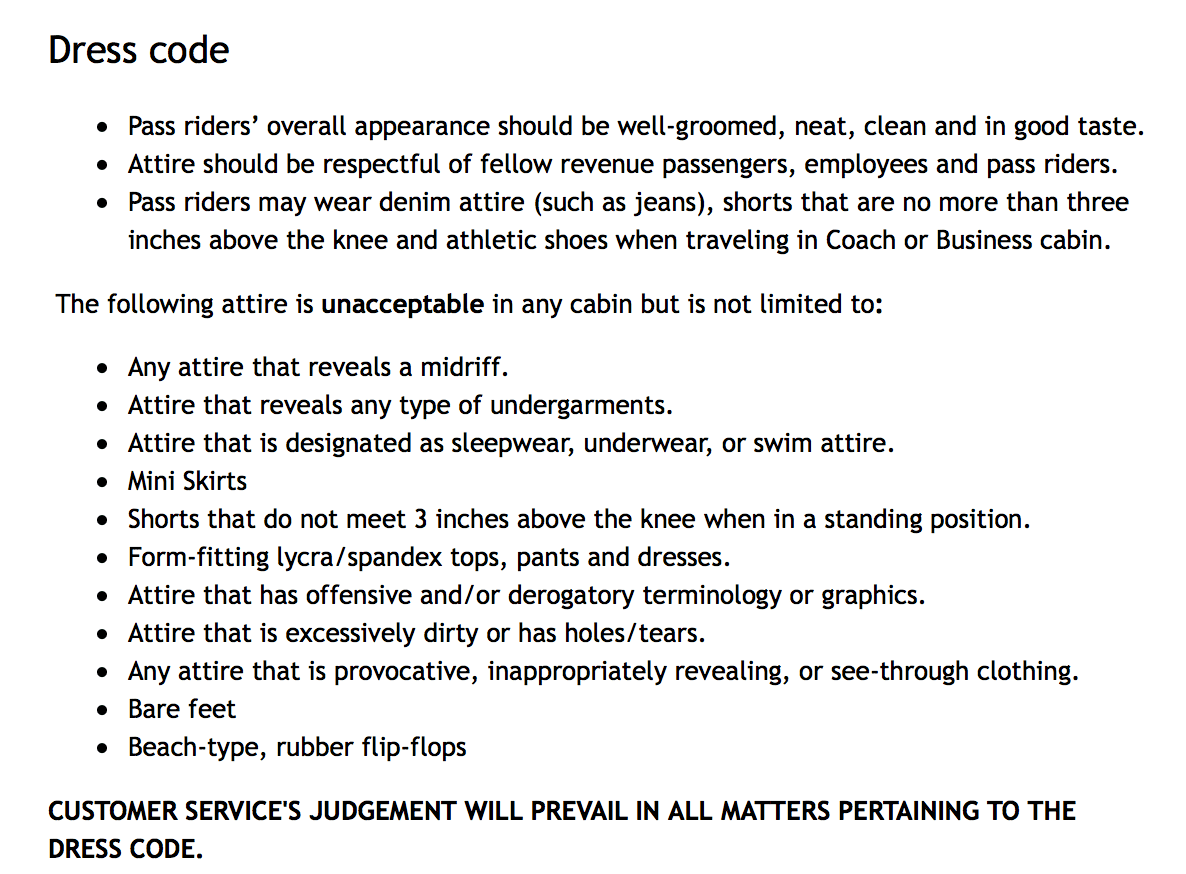 But is United’s pass wardrobe requirement inherently more sexist than other U.S. airlines? 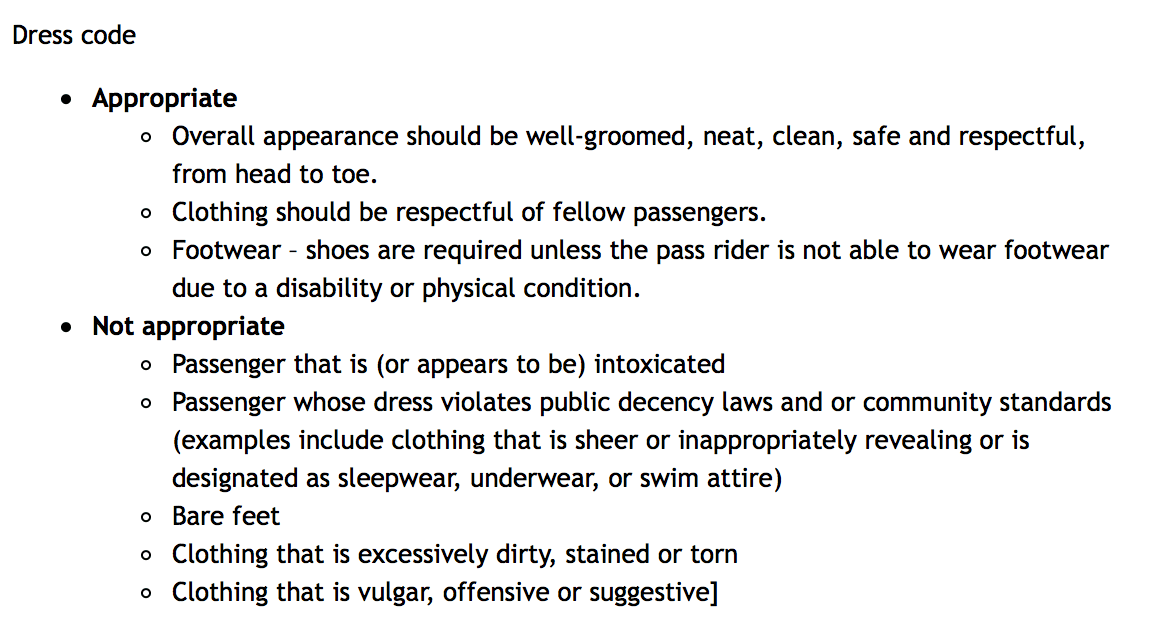 I didn’t want to go through all low-cost and regional U.S. carriers (you can find all airline staff pass rules here), but I thought I’d explore a major LCC and an airline whose market is more leisure oriented. 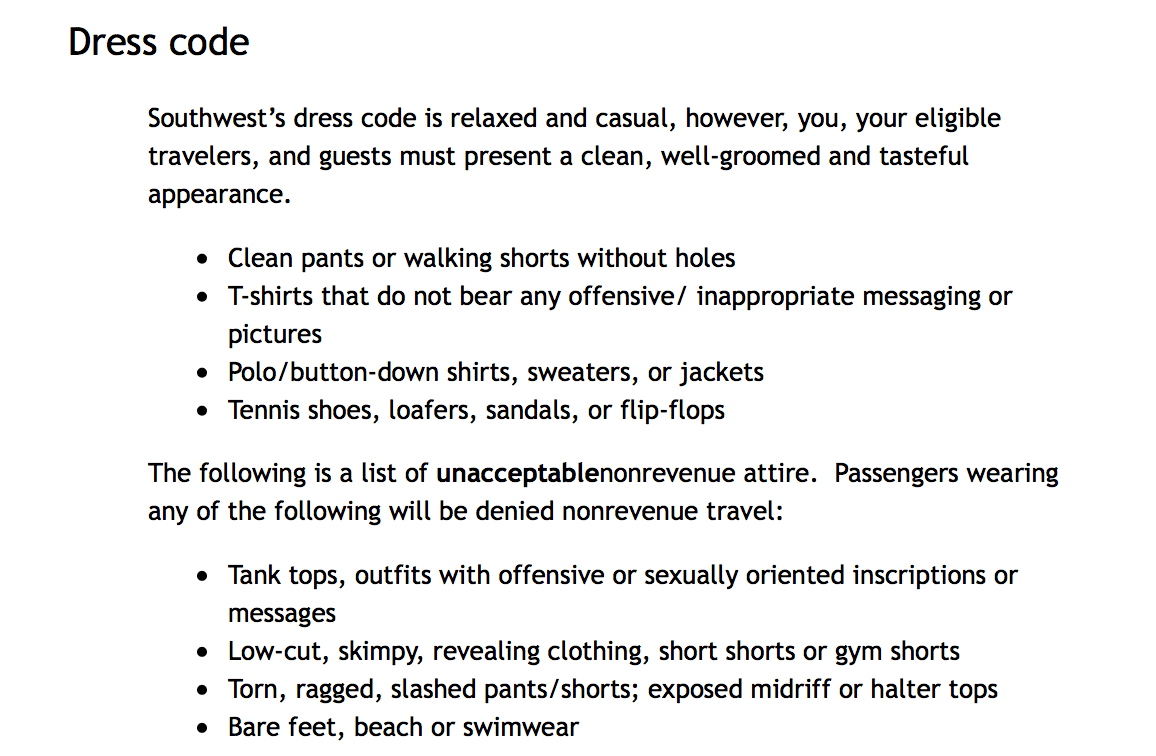 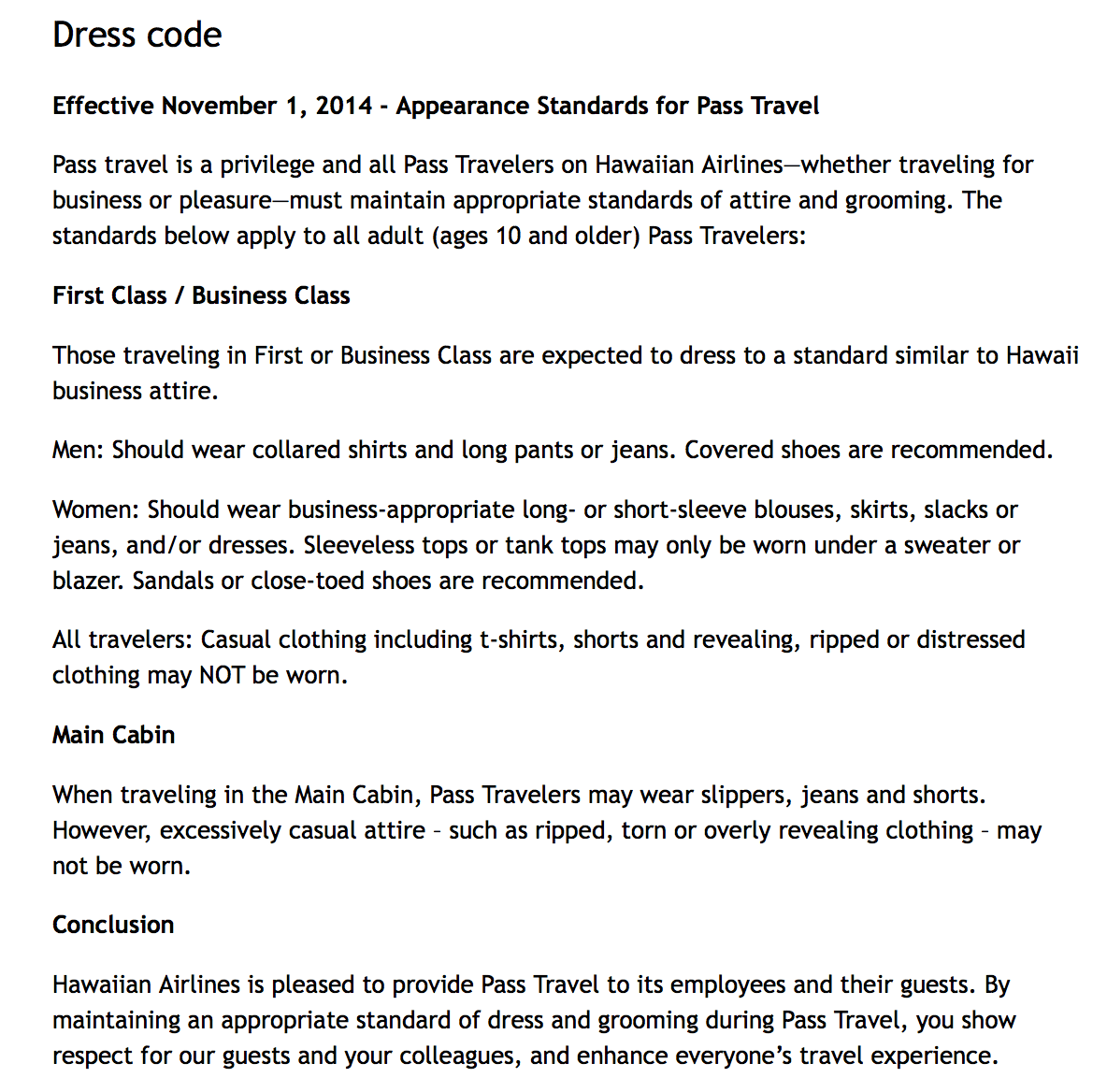 *Note that “slippers” in Hawaii are sandals.

Of these airlines, Hawaiian does the best job of avoiding a disproportionate focus on women’s wear. It leaves some things open to interpretation, but it is not written with gender bias and does not reinforce gender bias.

So the question remains: was United being sexist?

Not all passengers involved in the incident were women. The attire of all parties raises questions. Only two parties were barred from boarding. This disparity explains why many women were offended. It’s something women have put up with throughout their lives and it is demoralizing and belittling.

Without knowing whether the father violated the wardrobe restrictions for shorts, it’s really difficult to judge whether this was an overtly sexist decision, but the baseline rules are disproportionally more focused on the “decency” of women’s appearance. This is something the airline may want to look at more closely.

The fact remains that the dress code for staff prohibits leggings. The passengers should have dressed according to that code, whether or not that code is sexist.

But this is a good opportunity to have a discussion. Sexism is a problem. It is never a bad time to consider whether there is bias in our systems and to eradicate that bias.

One more issue remains: did United handle this crisis well?

Because the response from United is a public relations issue, that is entirely up to the court of popular opinion. “These are the rules” has not been well received.

But what else should United have said?

Perhaps promising to carefully review how the rules were applied in this case, and to re-examine the rules for gender bias, would have been better.