Marisa Garcia Leave a Comment on Also, In the Skies 16 Hot Aviation Happenings in Week 14

This is only a small sampling of all that happened during this past week, with the Aircraft Interiors Expo underway. The APEX Association has done a great job of covering the show and I recommend reviewing their daily updates.

It has been three days and Delta is still seeing tremendous delays. pic.twitter.com/i8oCUHGFXB

"The crews don't know what flight to do next, whether to go to the hotel, or fly to another city." https://t.co/iJhFF7XdYU

Not sure that pizza can fix this, but points for trying.

3. BA invests in the passenger experience across all classes, via Aircraft Interiors International

From September, BA will introduce a new restaurant-style premium dining service in Club World, with display trolleys offering a choice of starters and desserts, new table settings, and a new culinary boutique experience.

The 2017/18 customer experience improvement plan, which forms Year 4 of Ryanair’s “Always Getting Better” (AGB) programme, including service, digital, ancillary and inflight developments. The new initiatives to be rolled out over the coming year include:
· Connecting flights — on Ryanair’s network, then on other airlines
· Even lower airfares and more of them
· New bases (Frankfurt Main, Naples) and improved schedules
· “My Ryanair” Phase 2 – improved profile, offers and incentives
· “Plus” products improved: Regular, Plus, Flexi-Plus and Family Plus
· Ryanair Holidays rolling out across all markets – 3,4,5 star hotels
· Ryanair Rooms – more partners and more choice
· Amazon of Travel – New search function
· Into the Blue – bespoke travel content in the app in 5 languages
· Express booking — pre-saved preferences for faster bookings (3 clicks)
· Auto check-in — for both flights once return seats are booked

“The success of the ‘Always Getting Better’ programme over the past 3 years has been reflected in ever increasing load factors and record passenger numbers, which has seen our traffic grow by over 50%. In a year when Ryanair became Europe’s largest airline, carrying 120 m customers and Ryanair.com became the world’s most visited airline website, we are pleased to launch Year 4 of AGB today, with an exciting range of initiatives in digital, product and ancillary.

As we expand the Ryanair route network, customers will for the first time be able to book connecting Ryanair flights on the Ryanair.com website, with a feeder flight service with other airlines following later this year. While we continue to innovate, the one thing that won’t change will be our low fares, and European customers will still enjoy the biggest and best choice of destinations, with the most on-time flights and a fantastic onboard experience, as we grow our fleet, traffic and routes.”

The 34,000 m² (366,000ft2) facility will be at the heart of a multi-million pound program to renew Stansted and prepare for future hikes in passenger numbers.

Ryanair has been ordered to compensate a six-month-old girl for a flight delay, even though the infant was travelling on her father’s knee.

This is a problematic decision not just for Ryanair but for any airline which might be forced to compensate all parties affected by delays in many multiples of the original fares paid. The father had paid a £20 administration fee to carry the baby.

The two parents and a sister have already received €1,200 in EU261 compensation, which is almost four times the three one way airfares they paid of just £104.

• Scheduled traffic (RPK) increased 9.7% and the capacity (ASK) was up 12.2%.
• The load factor was affected by the timing of the Easter holiday and decreased by 1.6 p.u. versus last year to 69.8%.
• SAS carried 2.5 million scheduled passengers in March, up 8.9% vs. last year.
• The preliminary currency adjusted yield and PASK were down 3% and 5% in March 2017. The nominal yield was unchanged and the nominal PASK was down 2%.

8. Norwegian vs. BA in Battle of the Transatlantic via TTG Nordic

BA has been aggressive in responding to Norwegian’s speedy expansion, competing head-to-head between Gatwick and both Fort Lauderdale and Oakland. The new IAG LCC Level will take on Norwegian’s links from Barcelona. 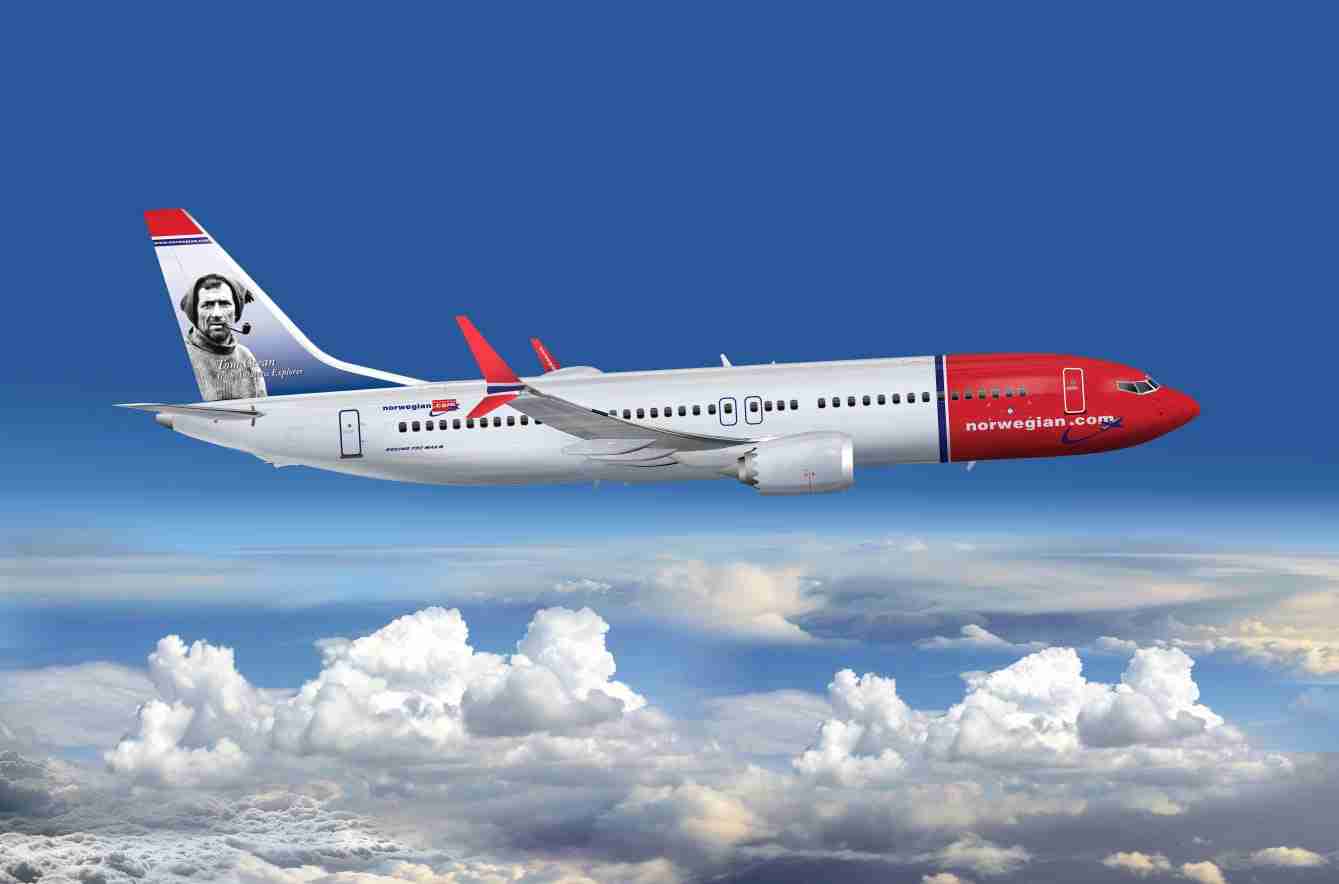 Average passenger traffic in geographical Europe grew by +5.2% during February, compared with the same month last year. While EU airports continued to lead the growth dynamic (+5.5%), the gap with non-EU airports (+4.2%) is narrowing — on the back of a much improved performance by Russian airports and strong increases in Iceland, Ukraine and Georgia. Conversely, passenger traffic is still declining in Turkey, although at a slower pace than in previous months.

In the EU, most of the less mature markets in the Eastern part of the Union posted double digit growth increases in passenger traffic, along with Cyprus, Luxembourg, Malta and Portugal.

While these growth rates are lower than those reported for January, the extra ‘leap year’ day in February 2016 should be taken into consideration. Accordingly, in an adjusted, equal comparison (based on 28 days), passenger traffic across Europe actually rose by +9%, with the EU market growing by +9.3% and the non-EU bloc by +7.9%. 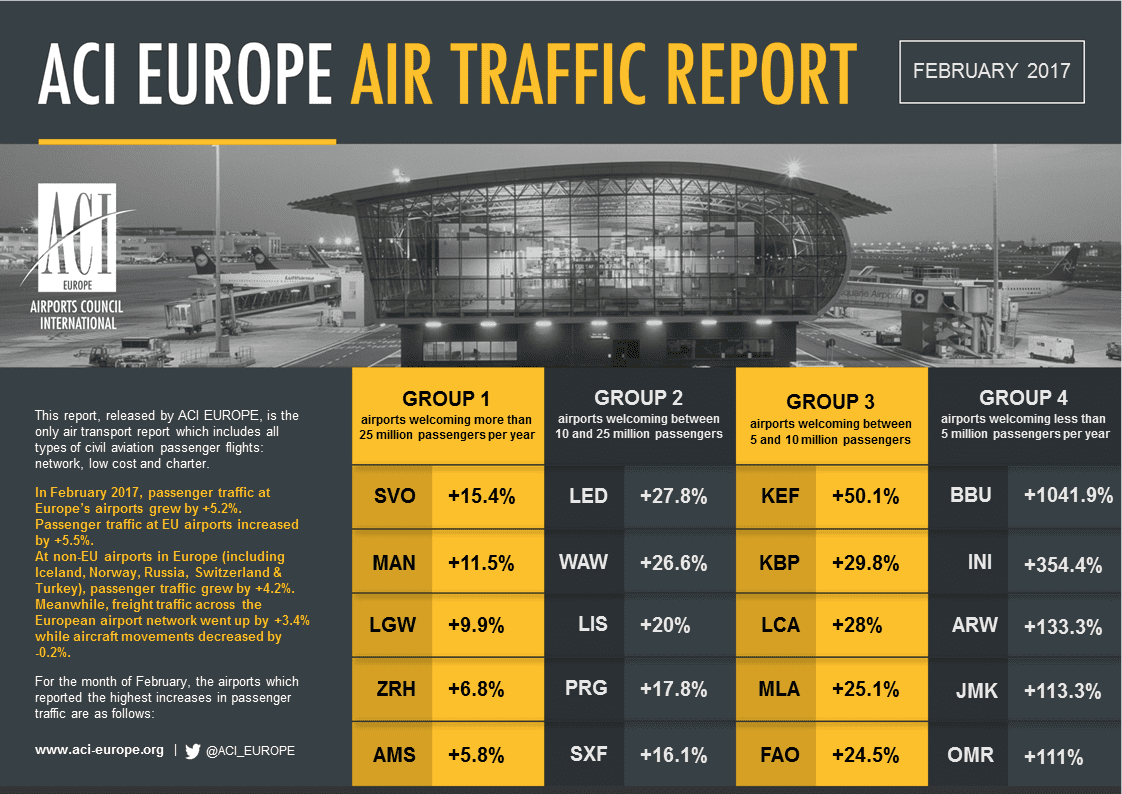 Three weekly flights:
Departing México at 7:45 on Tuesdays, Fridays and Sundays. Departing Guangzhou at 23:30 on Mondays, Thursdays and Saturdays.

The new route will be China Southern Airlines’ longest international route and will be operated by a Boeing 787 Dreamliner aircraft with 228 seats, including 4 First Class seats and 24 Business class seats.

“In recognition of Eq​ual Pay Day, Delta continues to deliver on our commitment to fairness and diversity in the workplace and to pay equality among all Delta employees,” said Joanne Smith, Delta’s Executive Vice President and Chief Human Resources Officer.

On average, women in the United States are paid 80 cents for every dollar paid to men, amounting to an annual gender wage gap of $10,470, according to the U.S. Census Bureau.

Delta reports it has reached nearly perfect pay parity between men and women in merit jobs—99 percent—as a result of a 1 percentage point improvement from 2016. The pay parity remains at 100 percent among scale employees.

“Although 99 percent pay parity is well ahead of the national average, we won’t be satisfied until the gap is zero,” Smith said.

Norwegian reported its traffic results for March 2017. A total of 2,453,551 passengers chose to fly with Norwegian in March – 258,514 more than the same period last year. The total traffic growth (RPK) increased by 16 percent, while the capacity growth (ASK) increased by 22 percent. The load factor was 84.1 percent, down 3.8 percentage points. The period is influenced by the fact that Easter is in April this year, whereas it was in Mach last year, consequently reducing the unit revenue by approximately 10 percent.

“We are very pleased to see that more passengers chose to fly Norwegian. The growth is primarily driven by our international traffic, which is becoming increasingly important in the company’s global expansion,” said CEO of Norwegian, Bjørn Kjos.

Additional flights on Tuesdays, Wednesdays and Thursdays will bring the weekly total to ten between Madrid and Lima this summer.

Iberia will raise its capacity on the Madrid-Lima route in July and August, with three additional flights each week.

The extra flights on Tuesdays, Wednesdays, and Thursdays will operate at night, facilitating connections at both ends. They will operate with 288-seat Airbus A330/200s, which will offer more than 15,500 additional seats in the two summer months.

The Airbus A330/200s are Iberia’s newest aircraft, as they joined its fleet within the past year. In addition to more comfortable seats in Business and Economy, and touch screens for entertainment in both, the new planes have KU-band Wi-Fi with fast download speeds to allow passengers to access their email and social networks.

Total revenue passenger kilometres (RPKs) rose 4.8%, compared to the same month last year. Although this was below growth achieved in January, year-to-year comparisons are distorted because February 2016 was a leap month. Adjusting for the one fewer day this year, the underlying growth rate was estimated at 8.6%, just under January’s increase of 8.9%. Monthly capacity (available seat kilometres or ASKs) increased by 2.7%, and load factor rose 1.6 percentage points to 79.5%, which was the highest ever recorded for February.

“The strong demand momentum from January has continued, supported by lower fares and a healthier economic backdrop. Although we remain concerned over the impact of any travel restrictions or closing of borders, we have not seen the attempted US ban on travel from six countries translate into an identifiable traffic trend. Overall travel demand continues to grow at a robust rate,” said Alexandre de Juniac, IATA’s Director General and CEO.

IATA estimates that allowing for inflation, the price of air travel has fallen by more than 10% in real terms over the past year, accounting for more than half the growth in RPKs in early 2017.

Reed Exhibitions, the organisers of the Aircraft Interiors Expo (AIX), and the Airline Passenger Experience Association (APEX) have signed a long-term strategic co-location agreement for their fall expo event in coordination with the International Flight Services Association (IFSA).

This year’s co-located event will take place at the Long Beach Convention Centre from 26-28 September with APEX, IFSA, and AIX all together in the same location at the same time. As the largest passenger experience event in the United States, the event enables the entire supply chain and all airlines to experience the full spectrum of products and services a passenger experiences in one journey.

Katie Murphy, Senior Exhibitor Director at Reed Exhibitions says: “We have long believed that there is a natural synergy between APEX, IFSA and AIX as a leading aerospace industry association and a leading organiser of aerospace exhibitions.

“The powerful and wide-ranging combination of exhibiting companies we attract will continue to build the reputation of our co-located event as the leading fall showcase for the passenger experience industry. We look forward to a longstanding partnership with APEX through which we can jointly deliver an event which serves as a strong platform for the aerospace sector.”

Joe Leader, Chief Executive Officer of APEX / IFSA, said: “Last fall with AIX, APEX hit a total of 3,500 attendees across our combined EXPO as we conducted three incredible shows into one major event. Now it will be even larger as APEX and AIX stand alongside IFSA returning to the United States. With this long-term agreement, we will combine the best of airline passenger experience, in-flight services, and aircraft interiors into the must-attend annual airline event here in the United States. Three shows in one incredible event means three times the passenger experience, airlines, business, and value for all who attend.”

Enjoy the week ahead!