Marisa Garcia 1 Comment on Also, In the Skies: 8 Hot Aviation Happenings in Week 18

This weekly post is my ‘round tuit’. Included are aviation stories which caught my eye and others which I couldn’t cover in-depth during the week, but thought Flight Chic readers would want to know about.

The successful first flight of the C919 narrowbody aircraft, built by the Commercial Aircraft Corporation of China, Ltd. (COMAC), is a huge aviation milestone.

The narrowbody aircraft market is sure to get heated. With Airbus and Boeing citing large demand in Asia for A320 and 737 family aircraft in this market, it makes sense that China would want to keep a share of that market home grown, and orders may extend beyond the wall.

We have entered a new competitive landscape.

Comac raising the bar for transparency for a 1st flight. A live view inside the flight deck is unprecedented by any cultural standard. #C919 pic.twitter.com/adbU45vB5M

COMAC clearly wanted to prove the viability of the aircraft to the world and it succeeded. What happens next will be worth watching, but it’s safe to say that the narrowbody market just got even more interesting.

On @AlJazeera #AJNewsGrid: Discussing airline customers of #C919 aircraft, how #COMAC will become a true competitor to Airbus/Boeing, & more pic.twitter.com/NujAYPzCno

China is already looking beyond the #C919, with plans to develop a wide-body long-haul jet with Russia. #China #avgeek pic.twitter.com/hYIfZcp22T

The perfect fly of China #C919 took off at Shanghai pudong airport pic.twitter.com/n2OTzZ9cdP

China-made #C919 passenger jet is ready to make its maiden flight. Get an inside look at its manufacturing process. pic.twitter.com/ppTT9PRkGY

Strong traffic demand continued throughout the first quarter, supported by a combination of lower fares and a broad-based upturn in global economic conditions. The price of air travel has fallen by around 10% in real terms over the past year and that has contributed to record load factors. We will have to wait another month to see the impact of the laptop ban on demand,” said Alexandre de Juniac, IATA’s Director General and CEO.

Hawaiian Airlines launched an updated brand identity inclusive of the new livery, graphics, logo, and redesigned Pualani: the brand’s beloved icon. As her first redesign in 15 years and one of the first female icons painted on a commercial airline, Pualani evolves at pivotal moments in the airline’s ever-changing phases of growth.

The updated re-design was released on Lei Day. Hawaiian culture remains the bedrock of this 88-year-old airline. In fact, the creative consultancy that worked on the new identity spent a year studying the airline’s history and immersing themselves in the Hawaiian culture in order to get the redesign just right.

We celebrate #LeiDay a little differently each year. Tune in to our FB Live tmw @ 9 am HST to see how we #ceLEIbrate! #CountdownToLeiDay pic.twitter.com/UOA9dP8XB2

The new livery and logo of @HawaiianAir on its Boeing 717. Photo via Aeros808. Mahalo. #ceLEIbrate #Pualani pic.twitter.com/XYonpCz5Ib

4. U.S. Airlines can now be sued for delayed luggage.

US Federal Court Rules Airlines With Baggage Fees Can Be Sued if Bags Are Late https://t.co/ALcQqokSiN h/T @theAPEXassoc

5. Are you afraid of flying? Royal Jordanian tackles discrimination in the skies.

I can’t say enough good things about this Royal Jordanian commercial. The airline has been courageous in drawing attention to problems in the air with changing policies abroad. It was first to alert of changes to visa policy in the U.S. for passengers from some predominantly Muslim countries, and first to give the world a heads-up about the problematic electronics ban.

This airline just made an incredible commercial about discrimination while flying https://t.co/s1IrS0EXVj via @TravelLeisure 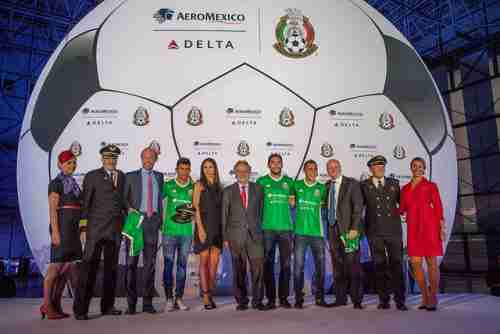 The sponsorship promises to deliver premier fan experiences, community engagement and unique online content.  With over 140 million loyal MNT fans living in México and the United States, MNT plays an important role in the Hispanic culture and provides a natural platform to celebrate the start of the joint co-operation agreement between Delta and Aeroméxico once the JCA becomes effective.

Delta and Aeroméxico will serve not only as the team’s official airlines, but the global sponsorship will include an array of promotional assets around all games in Mexico, Mexico hosted games in the U.S. as part of the annual MNT U.S. Tour, and at World Cup qualifiers and international exhibitions played in both countries.

“This sponsorship is historic both for Delta and Aeroméxico, as well as for the Mexican National Team.  We are delighted to be working with a team that resonates so well with our employees and customers on both sides of the border,” said Steve Sear, Delta’s President — International and E.V.P. — Global Sales.  “There could not be a better way to celebrate our two airlines coming together to build our transborder partnership between the U.S. and México when the JCA becomes effective.”

“For Aeroméxico, as the flag carrier of Mexico, it is a pleasure to be part of this sports deal. This sponsorship reflects the importance of the Mexican National Team for the country and our upcoming partnership with Delta. We are excited to launch this new sponsorship and look forward to the benefits it will bring to our customers and employees,” said Anko van der Werff, Chief Revenue Officer at Aeromexico.

8. This story of the Hindenburg disaster is a very interesting AvGeek read.

Why the Hindenburg disaster is an air crash worth remembering https://t.co/18VorqVSvW via @TravelLeisure

Make the most of your week 19!