IATA has distributed a copy of a letter issued to John F. Kelly, Secretary of the US Department of Homeland Security, with a copy to EU Commissioner for Transport Violeta Bulc, which details the costs to passengers and the Economy of an extended electronics ban in Europe.

IATA’s letter comes as a meeting in scheduled in Brussels today to in an attempt to reach agreement on how the electronics ban may be managed for flights bound from Europe to the U.S.

It values the impact on the ban on passengers at USD $1.1 Billion per year and warns of further impact to the global economy as business travel is restricted.

The figures are based on air traffic from all EU 28 member States, plus Switzerland, Iceland and Norway.

IATA states that Business and first class passengers make up about 13% of all travellers from EU+ to US. The airline association has calculated the economic cost based on a conservative estimate that only about 50% of business travellers use the available time to work on the personal electronic devices for 5 hours per flight (the average flight takes a little over 9 hours). The value of the lost productive time is estimated based on applying the FAA recommended hourly values of travel time savings, which suggest using a figure of USD 64.6 for the value per passenger hour.

The airline association has calculated the economic cost based on a conservative estimate that only about 50% of business travellers use the available time to work on their Personal Electronic Devices for 5 hours per flight ( with the average flight a little over 9 hours).

IATA determined the value of lost productivity based on applying the FAA recommended hourly values of travel time savings, which suggest using a figure of USD 64.6 for the value per person-hour of business travellers by air – once adjusted for 2016 US CPI.

Additionally, IATA considered prolonged travel times caused by the logistics of complying with the ban.  Flights from the EU are estimated to increase on departure by an average of 5 minutes per passenger, on arrival by 3 minutes per passenger, due to time it takes to collect the electronic devices and one minute of flight delay.

According to IATA, airlines already affected by the first round of PED bans have reported that about 15% of their flights experienced delays specifically attributed to the electronics ban. The average delay reported by these airlines is about 7 minutes per flight.

FAA recommended hourly values of travel time savings suggest using a figure of USD 47.2 for the value per person-hour for the average traveller by air – once adjusted for 2016 US CPI.

IATA also says that data supplied by airlines affected by the first round of electronics bans would suggest that 70-80% of travellers carry PEDs.

IATA also factored in rental rates for tablets and laptops for travellers are at USD 18.5 per day,  not including the greater costs of delivery and insurance costs.

IATA also warns of detrimental impact to air carriers as a result of carrying laptops and tablets as cargo, including the risks of liability for damaged equipment.

The airline association highlights the increased risk of fire from greater numbers of lithium battery-powered devices stored in the aircraft hold.

On 10 May 2017, IATA facilitated a Security Summit in Washington, D.C. including representatives from airlines, airports, associations and regulators to identify measures which could be taken as an alternative to any expansion of the ban.

The letter, signed by IATA Director General and CEO Alexandre de Juniac is embedded below. 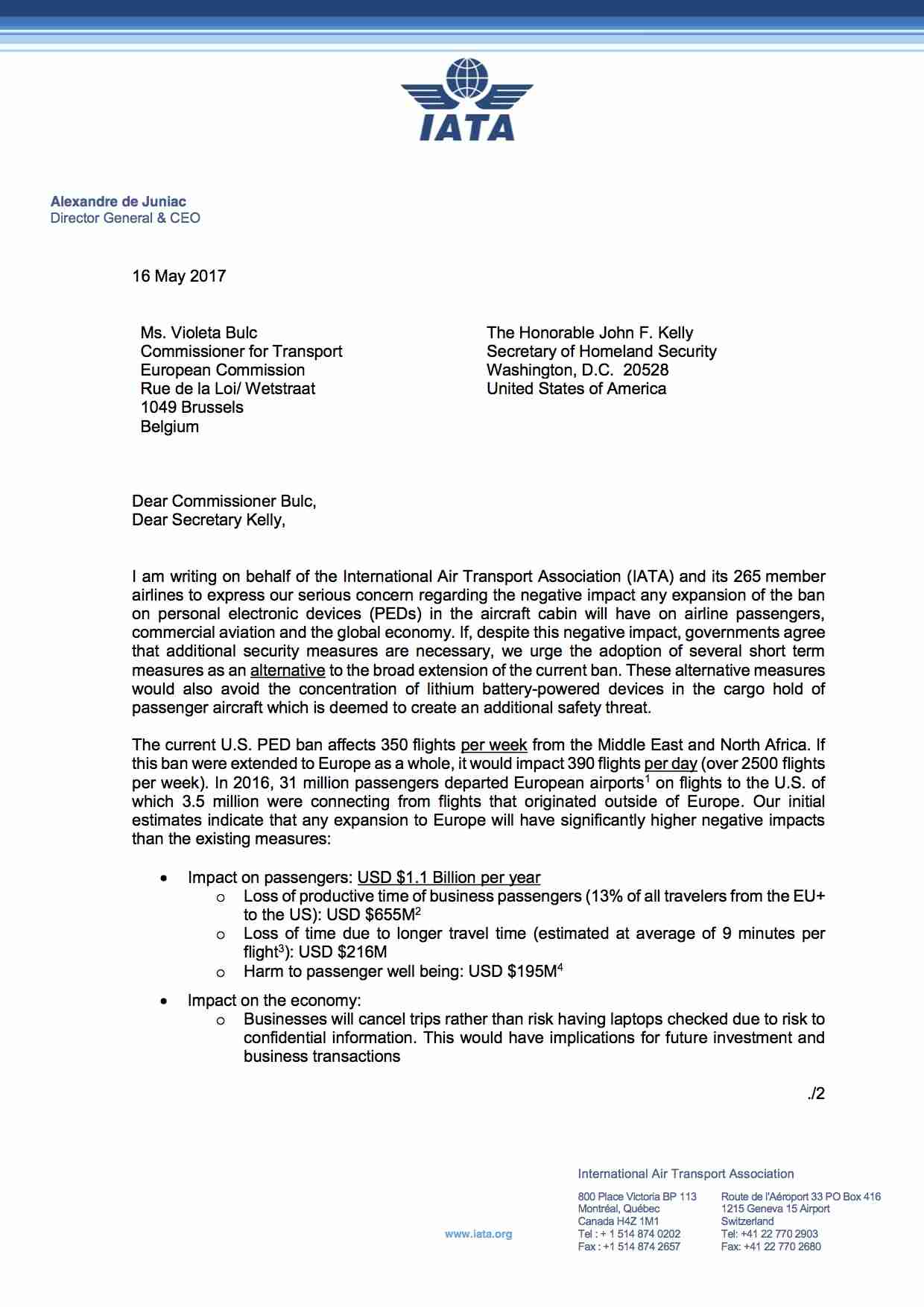 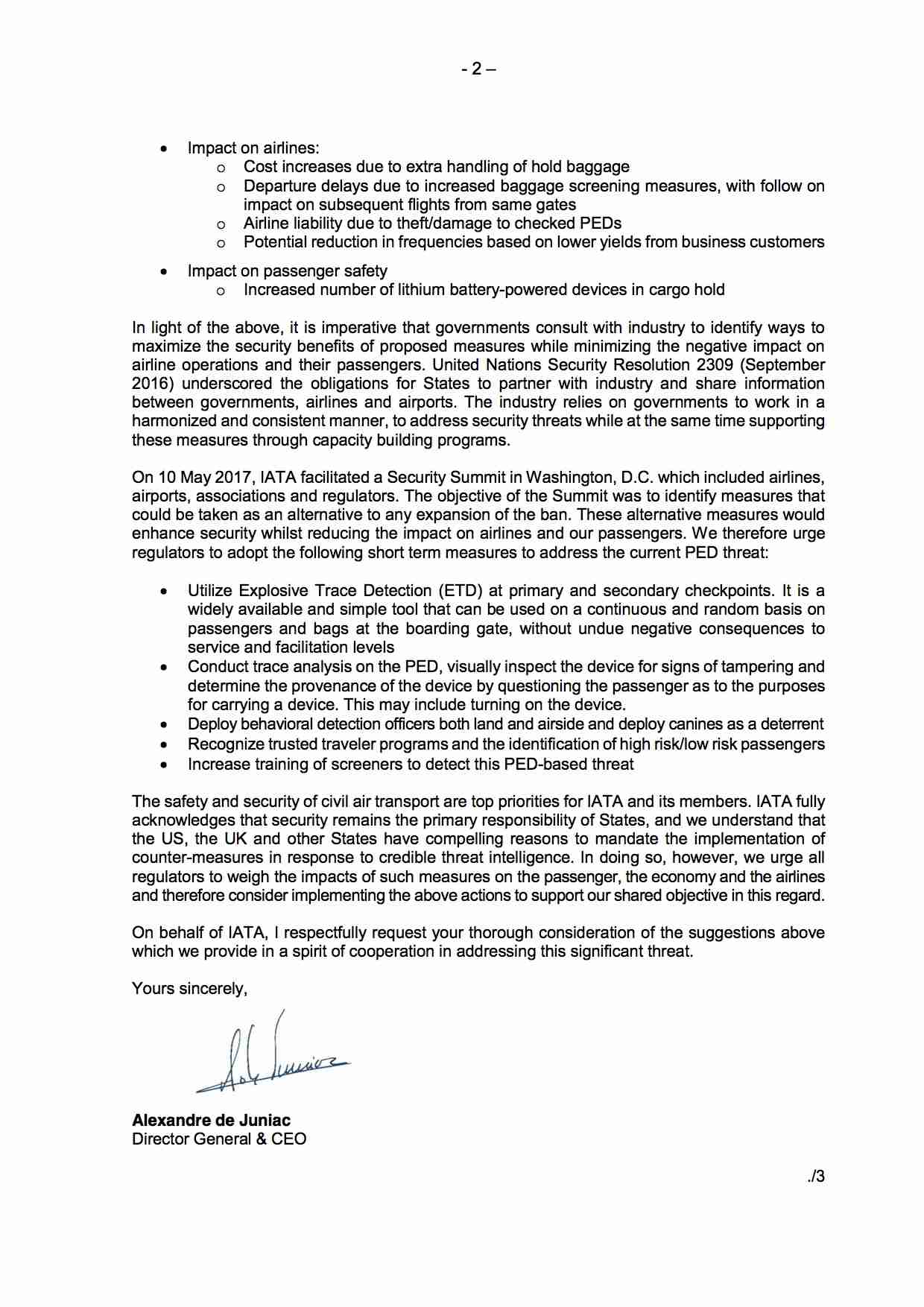