From booking extras on-the-go to keeping planes healthy, here are some of the most noteworthy revelations at SITA ATIS in Brussels this week. 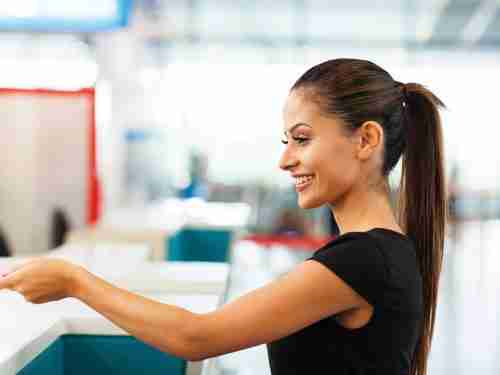 SITA’s AiportConnect Common Use Payment Service can now process payments securely for multiple airlines on a single terminal, on any departure control system. This development resulted from an IATA Common Use Working Group collaboration of SITA with Verifone, Thales and Smart Technology Solutions.

Why this matters: For airlines sharing common-use or shared IT infrastructure, it allows payments processing at check-in desks, kiosks, and bag drop areas. It lets airlines sell last-minute upgrades and added services, like baggage or lounge access, without sending passengers to a separate ticketing desk to process payment.

The service was first deployed on SITA AirportConnect workstations and will be rolled out on SITA’s common-use kiosks and bag-drop stations over the next few months. 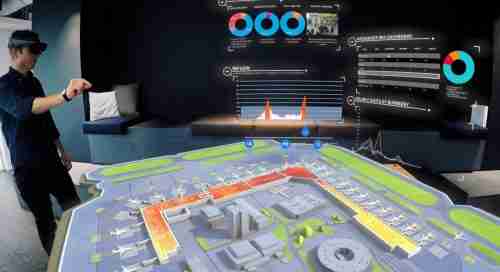 Trust Helsinki Airport to jump right into this one. They’re always keen to experiment with futuristic technology. They even debuted a fully immersive video tour of their terminal expansion project a couple of years back. You can read more about other practical applications for VR at airports in my cover-story report for Passenger Terminal World Magazine.

The mixed-reality experiment resulted from a light-bulb moment when SITA CTO and head of SITA Lab, Jim Peters, was playing around with a Microsoft HoloLens device at the office. It occurred to him that this was a good match for SITA’s Day of Operations software because HoloLens can better help visualise complex data when operations managers aren’t in front of the flat screens at airport control centres.

Why this matters: It’s great to see this conservative industry get out and play a bit with blue-sky ideas. Besides, there are some significant advantages to this technology. I believe it’s ideally suited to airport design because it could blend operations data with various scenario calculations, combined with existing and proposed CAD drawings for airport Terminal layouts. Airports could quickly manipulate the space and visualise the impact to passenger flow of infrastructure changes.  Plus it’s cool.

How it works:  Erm..I took the system SITA put together with Helsinki Airport for a test drive, and it’s not quite Avatar quality..yet.

You have a limited view of the virtual space at any one time. Sometimes, what you’re looking for is cut off by the edge of the glass. Let’s say it needs a little work. But the manual “happy talk” fingers pinching movement is pretty easy.

Training takes about a minute. The system responds immediately to hand gestures.

Besides, you aren’t blind to your surroundings, which is an advantage compared to VR. You can collaborate with others in the room and anywhere, through a Skype connection.

SITA Lab found that, unlike virtual reality, the mixed reality experience does not to make people feel disorientated or nauseous. I found the same thing. While VR has left me for a loop before, the Mixed Reality HoloLens experience was just like wearing 3D glasses.

HoloLens has a good battery life and doesn’t suffer from over-heating as Google Glass did. I still felt odd wearing them. They’re somewhat bulky and an awkward fit. But maybe my head is too big?

Peters, SITA, added: “Mixed Reality hits a sweet spot of having an experience that is fully immersive for the user but also keeps that person in the real world. The user can interact with both and avoids the disorientation or discomfort of fully immersive virtual reality.  There are benefits to having multiple people using the headset and simultaneously interacting with the same virtual display. This could be useful for scenario planning exercises.”

How much does it cost? Well, it’s not cheap. Leave aside the $3,000-$5,000 you have to pay for each HoloLens, depending on whether you purchase the commercial or developer version. You’d have to create a custom VR application, too, if you wanted to use if for Terminal design planning.

Still, HoloLens is taking off with designers, architects and civil engineers because it is very useful for these applications, as Fracture CTO Rob Minson explained to me at the conference. I’d say it’s worth keeping an eye on this technology as it evolves.

These programmable robotic kiosks can go wherever crowds build up for added check-in capacity.

Why this matters: Renaud Irminger, Director of SITA Lab, said: “The peak and troughs in the flow of passengers present a challenge to many airlines and airports and we have been approached by many customers requesting a solution. They want kiosks which can be easily deployed when and where they are needed. Building on SITA’s successful AirportConnect® Open platform, and our previous work with robotics, KATE leverages new technologies to provide operators much more flexibility and efficiency in the way they will use their kiosks in future.”

KATE is another example of SITA thinking well into the future and finding new ways to address common airport challenges.

How it works: KATE terminals use geo-location to find their way around the airport to where they ought to be. They can communicate via Wi-Fi to airline and airport systems on a Cloud service. SITA has patents pending on the technology.

I’m not sure how people would react to a row of moving kiosks rolling by. Would passengers try to chase them?

There is no truth to the rumours that KATE has been stepping out with LEO, SITA’s baggage robot, but I bet they’d make a nice pair.

LEO is a bit K-9, but KATE knows her way around the block. 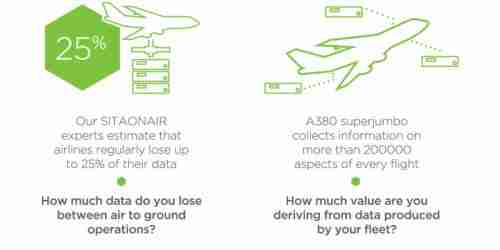 Planes are getting smarter, and that’s a very good thing. Using SITAONAIR’s e-Aircraft DataCapture, Air France and Airbus are getting ahead of MRO issues by capturing performance data in-flight.

Why this matters: Planes are expensive to buy, expensive to operate and expensive to maintain. Airlines need as much data as possible—quickly—to stay ahead of operational and performance issues. It speeds up maintenance processes and avoids lost revenue time on the ground.

How it works: The e-Aircraft® DataCapture collects, compresses and encrypts an aircraft’s Quick Access Recorder (QAR) or Digital ACMS Recorder (DAR) data. This data is automatically and immediately transmitted to a ground server provided by SITAONAIR via a 3G connection and transferred to Air France’s data analysis system for instant analysis and response.

Pierre-Yves Benain, Head of Portfolio and Strategy, e-Aircraft at SITAONAIR, explains: “Our intelligent e-Aircraft® DataCapture solution is already making aircraft data easier for airlines to access; reducing data retrieval time from days to minutes, without mobilising maintenance resources. Thanks to DataCapture, airlines can get an immediate detailed picture of all parameters recorded in-flight by a QAR or DAR recorder. With our Cloud-based solution, our intention is to provide an end-to-end, expert data management service at business continuity level, freeing up airlines to focus on their core operations and engineering priorities.”

Air France is happy with it.

“We are really pleased to be taking SITAONAIR’s e-Aircraft® DataCapture system onboard. It will enable us to complete the deployment of automated QAR/DAR data collection across our Airbus fleet for our Flight and Maintenance Operational Quality Assurance programs. SITAONAIR has been instrumental in the integration of the solution into our existing onboard hardware and ground systems,” said Air France’s e-Aircraft DataCapture project leader.

As usual, there were great talks and presentations from industry experts during the conference—and a little bit of controversy. There is resistance building up against some industry standards for technology applications.

The crux of the problem seems to be that some airlines believe they’re better off going outside the industry for fresh perspectives and easy-to-deploy solutions. Of course, they’re right. But they’re also wrong. The reality is that aviation is an interdependent global industry with high levels of risk and complexity.

You need standards to facilitate the exchange of data between different partners using different systems.

Ensuring that no airline is vulnerable to systems exploitation also requires industry standards.

But many non-airline industry developers could help move things along and introduce new ideas.

There’s an opportunity to balance between rigorous and inflexible standards without sacrificing innovation and financial benefits.

Door to door service is an ideal for seamless travel, but it would be very welcome. #ATIS2017 pic.twitter.com/KH55Rw17YL

🔮"Predictive analysis will enable things that are without scope today," says Dalibard. #ATIS2017

“If you delegate your digital transformation to your IT department you’re going to fail,” he said while describing IT as “an equal part of the team.”

"[Digital transformation] is not about 're-coding' your business but about rewriting your business model as a whole," Mueller. #ATIS2017

“Technology is always very exciting, but you cannot just layer technology and gadgets because you end up with more complexity,” Mueller.

“It’s not enough to be connected, you need to be integrated,” Mueller.

"The future is unthinkable without the cloud," Mueller. If you tried to store all that data locally, "the power would go out." #ATIS2017

“Safety and security for airlines is the first priority.”

“IT is no longer a skill set—it’s a toolkit. There’s nothing called IT in business..the backbone runs on technology.”

“[Customers’] last experience is their next expectation.”

“Use a design thinking customer-centric approach…Sometimes it’s a very simple but elegant solution that solves the problem.”

“Airports have evolved from being infrastructure providers to businesses. Europe is at the lead [of this trend] globally because of the push for privatisation which started in the 1980s.”

Airports are turning from B2B to B2C, he said. “[They are] re-strategising commercial activities, by embracing digital and working on a narrative for the passenger experience.”

Jankovec also suggested we might expect airports to form JVs with concessionaires—at a time when airlines are pushing for a greater share of the revenue pie.

Jakovec also told us to expect a multi-airport app revealed by several European airports in June. Can’t wait to see what that’s like.

Robert Webb, @EtihadAirways : It is not business and technology anymore…business IS technology. Speaking at @SITAonline #ATIS2017

“As an industry, I’d encourage everyone to look at collaboration and co-creation.”

80% of data is unused because it is in unstructured form, says Sanjay Brahmawar, GM, IBM Watson IoT #ATIS2017

"Airlines need to think about where they want to be in the passenger value equation."–@joepleader #ATIS2017