Norwegian first began operations at Edinburgh Airport in 2009 and has since flown more than 1.3 million passengers to Scandinavia and Europe.

Earlier this year, the carrier announced new transatlantic flights from Scotland to smaller airports on the US east coast.

Today, Norwegian’s inaugural flight to the USA will depart from Edinburgh Airport at 5:15pm, commencing its daily service to Stewart International Airport in New York. This week, Norwegian will also launch its first services to Providence, Rhode Island on Friday (16 June) and the UK’s only direct service to Hartford, Connecticut in the heart of New England on Saturday (17 June). All three destinations offer access into the New York City, Boston and New England areas.

To support the new transatlantic routes, Norwegian has now officially opened a new pilot and cabin crew base at Edinburgh Airport, creating more than 130 jobs to contribute to the Scottish economy. The new Edinburgh base joins London Gatwick to become Norwegian’s second UK base as the carrier continues its rapid growth in Britain.

Norwegian Chief Executive Officer, Bjorn Kjos said: “I’m very pleased to mark this major milestone which gives passengers in Edinburgh and Scotland the opportunity to travel to the USA at truly affordable fares.

“Consumers have responded positively to our affordable fares on both sides of the Atlantic which is stimulating increased tourism and business travel to and from Scotland.

“Not only is Norwegian transforming transatlantic travel by connecting smaller cities in huge catchment areas but we’re also unlocking affordable direct high quality travel to a new market of travellers.

“As such, Edinburgh is important to our future UK growth and it will allow us to create more Scottish jobs at Norwegian which in turn benefits the workforce of Scotland’s tourism industry.”

Minister for International Development and Europe, Alasdair Allan said: “It’s fantastic to see these new flights get off the ground today, helping us build on Scotland’s strong business and cultural bonds with the United States of America.

“These low-cost, long-haul services will open up more international markets for Scottish businesses and help support our tourism industry by giving visitors even more options when it comes to getting a taste of the fantastic experiences on offer in Edinburgh and Scotland as a whole.

“This new partnership will also see planes based in Edinburgh, creating jobs at the airport and helping the local economy. This investment is a huge vote of confidence in Scotland’s aviation sector.

“These are exciting times for Edinburgh Airport and Norwegian. We wish them every success and look forward to helping them build on this partnership in the future.”

Chairman, Edinburgh Airport, Sir John Elvidge said: “We are delighted to welcome the launch of these pioneering services by Norwegian to North America. Like Norwegian, we are committed to providing our passengers with choice and the partnership is delivering just these.

“The new routes give Scots far more options when wanting to travel to the United States. Equally, we’re looking forward to welcoming the great many American tourists who will use these routes to visit Scotland.”

Chief Executive of VisitScotland, Malcolm Roughead said: “Scotland is more connected than ever before through transport and digital channels, giving it a louder voice within key markets. The United States is our biggest international market, and last year we saw an 18 per cent increase in the number of visitors from North America along with a 40 per cent increase in spend.

“Not only is it exciting to see Norwegian add direct flights between three new destinations in the US and Edinburgh, but these low-cost transatlantic fares also come at a time when the exchange rate is already making Scotland a very appealing destination and this will undoubtedly generate a great deal more interest among US travellers.”

737–800 aircraft will service these routes until Norwegian receives the Boeing 737 MAX aircraft which is scheduled to join Norwegian’s fleet later this summer after Boeing delayed deliveries. 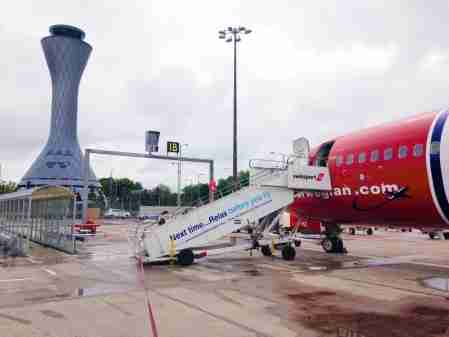