Skip to Content
Home Aircraft Can Plus Make a Difference? Airbus Reveals A380 Re-Design

Marisa Garcia Leave a Comment on Can Plus Make a Difference? Airbus Reveals A380 Re-Design

As the Paris Air Show kicks off, Airbus has revealed details of its plans to improve the operational performance of the A380 aircraft, hoping to retain customer loyalty to the embattled aircraft model and perhaps attract more customers.

Airbus promises airlines a 13% cost reduction per seat, versus the current A380 model, while suggesting that passengers will still enjoy the A380’s “unique comfort level.”

The new features of the A380 Plus include a prototype winglet, which grabbed a lot of attention at Le Bourget, though the units on display are not yet flight-ready. Airbus says the winglets will provide up to 4% fuel burn savings.

While Airbus has argued in favour of the A380s as the ideal aircraft to carry large numbers of passengers between major global hubs and has also actively promoted the A380 experience, the market seems to be moving away from the very large aircraft range. Can these engineering improvements make a difference? 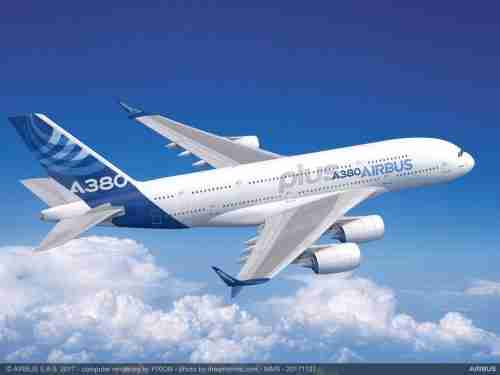 A380 Plus Development Study

First, it’s important to note that Airbus is only presenting a development study for the “A380plus” at this point. In other words, it is putting on display the various proposals of its top engineers on changes which might be made to the aircraft to reduce its operating costs and boost the revenue airlines could make from each flight.

This is more than a blueprint but closer to a mock-up than a final product. For this reason, all of the features proposed and some of the claims currently made about the various features, such as the claim that these features would not be retrofitted onto existing A380s are subject to change.

As the design process evolves—no doubt benefiting from customer feedback at the Paris Air Show—the final result may vary, even improve.

The Airbus study includes aerodynamic improvements in particular new, large winglets and “other wing refinements” that allow for up to 4% fuel burn savings. 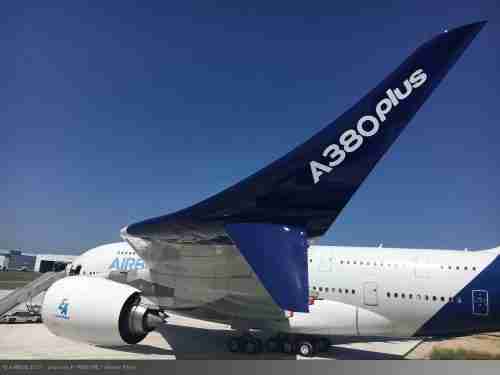 That the wings may require modification could explain why Airbus has no plans to offer these improvements as a retrofit option at this time.

These winglet enhancements, combined with what Airbus describes as “an optimised A380 maintenance programme” and changes to the A380 cabin which Airbus first revealed during this year’s Aircraft Interiors Expo (AIX) in Hamburg this April, would offer a 13% cost per seat reduction compared to today’s A380. 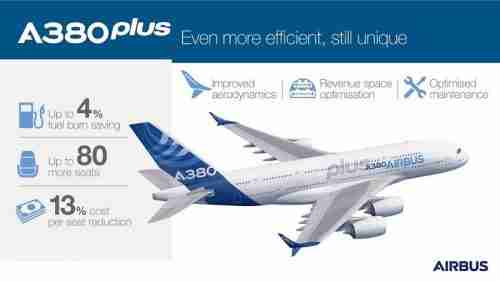 The optimised cabin layout allows up to 80 additional seats to be added to the aircraft with, Airbus claims, no compromise on comfort. The primary changes would be redesigned stairs to the upper deck which leave more room for seats below, a combined crew-rest compartment, sidewall stowage removal, a new 9-abreast seat configuration in premium economy and 11-abreast in Economy. (Put a pin on those last two.)

A new step for an iconic aircraft

John Leahy, Airbus COO Customers, explains: “The A380plus is an efficient way to offer even better economics and improved operational performance at the same time.” John adds: “It is a new step for our iconic aircraft to best serve worldwide fast-growing traffic and the evolving needs of the A380 customers. The A380 is well-proven as the solution to increasing congestion at large airports, and in offering a unique, passenger-preferred experience. ” 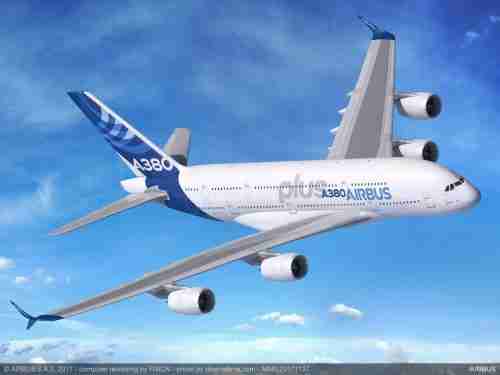 Airbus has consistently promoted the passenger experience onboard the world’s largest airliner, and they are not all limited to seats.

Indeed, the spaciousness of the cabin of this mammoth aircraft is difficult to grasp until you step inside. The way in which cabins can be divided by service galleys and lavatories somewhat diminishes the sense of crowding that passengers experience on other aircraft.

The A380 also offers noise reduction, enhanced environmental controls, roomy storage, wide aisles, more floor space and other holistic elements which improve the flying experience. Generally, those who fly on the plane like it.

Airbus has capitalised on the positive buzz on social media surrounding the A380 by developing a dedicated booking site iflyA380.com. It refers travellers to partner airlines which operate the aircraft to their preferred destination.

Airbus has also partnered with Routehappy to promote the various features of the onboard experience on the A380 and A350 on airline reservation systems, flight search sites, and on-line travel agencies.

Even as the manufacturer is reducing the rate of production for the aircraft, it is working hard to bring those numbers back up.

Right now, the airline’s average capacity on A380s in operation today is 497 passengers. The plane was originally certified to hold up to 853 passengers in a one class (all Economy) configuration.

Airbus says that the 497 passenger standard is attracting above-average passenger load factors. Some airlines (which have experienced other troubles) may have been flying these aircraft half full (or less), but they are the exception.

Emirates, which is the world’s largest operator of the aircraft, has previously said it would continue to buy A380s, if the economics improved. This A380 Plus proposal isn’t quite the full A380neo with engine changes that Emirates was asking for. It is a compromise which would be easier to deliver without having to fully re-design the plane. (Put a pin on Emirates’ plans to modify the aircraft too. We’re coming back to that shortly.)

With the proposed A380 Plus cabin changes, the average seat count would increase from the 497 today to 575 in four service classes: Economy, Premium Economy, Business and First. Airbus argues that this configuration would “generate significantly more revenue for airlines.” Of course, this is Airbus’ conceptual proposed layout and airlines can do as they like.

New A380 Plus Cabin Specs

The NFS involves the relocation of the forward stair from Door 1 to Door 2, and combining the entrance of the NFS to the upper deck (going up), with the adjacent staircase to the lower deck crew-rest (going down). The NFS would make room for up to 20 additional passengers.

For the CCRC, the existing flight-crew-rest (behind the cockpit in the mezzanine area at Door 1) is moved down and combined with the cabin crew rest on the lower deck. This innovation frees space for three extra Premium-Economy passengers at the front of the main-deck.

Thanks to an innovative seating concept developed by Airbus and its seating partners, Airbus is able to maintain an 18inch seat-width while offering airlines an 11-abreast Economy Class on the main deck in a ‘3-5-3’ configuration. This enables an increase in capacity of 23 seats – adding significantly to the A380’s revenue-generating potential.

The AGSM involves the redesign of the rear stair from a spiral configuration to a straight/square one. On the main deck, this allows valuable storage volume for galley modules. Overall the AGSM provides space for 14 more revenue passengers plus two extra food trolleys.

The option to remove the sidewall stowages on the upper-deck increases the wall-to-wall cabin width at foot-rest height – which makes space for up to 10 more business class seats/beds when an angled herringbone arrangement is used.

The A380’s generous main-deck cross section – significantly wider than any other commercial airliner – is allowing seat manufacturers to optimise their Premium Economy (PE) seat designs to create the industry’s most efficient and comfortable PE layout possible. This layout enables 11 more PE seats than in an eight-abreast layout.

Of all of the changes proposed to the cabin, the one which seems to have earned the greatest backlash from observers is the idea of moving to an 11-abreast Economy cabin. This is understandable. Sitting in a 3-5-3 cabin just doesn’t sound right for single flyers.

I’d not like to be the middle passenger in that 5 nor even in either one of the 3. If an airline could find a way to fit a few rows as 2-5-3, I think that would be better (though it would lead to a wonky and perhaps impractical LOPA). But the reality of A380 operations is that they are often flown by families. These are great aircraft for bringing holiday-makers to attractive destinations en-masse. So many of those travelling may not mind and might prefer sitting together.

But that judgment doesn’t take into account the many passengers who may be travelling with family members in Economy. They may not mind and might prefer sitting together.

Airbus has designed this new cabin proposal focusing on singles as Premium Economy customers. There is a certain logic to that. It may not fit the budget of every passenger, but PE is designed to be reasonably affordable and significantly better. For those travelling on business who don’t have the budget for a Business class seat, this is an ideal compromise.

There is also more room for Business Class seating, which is a considerable revenue boost. With airlines now offering Business class seats that rival many First-class experiences, it’s conceivable that airlines could feature 3-Class A380s with optimised LOPAs to boost that revenue further.

What is unlikely is that there will be too much emphasis on Economy crowding. I say this based on the experience of Emirates with its alternative A380 two-class layout which debuted on flights between Dubai and Copenhagen. It is designed to seat a shocking (though still well under the maximum) 615 passengers with 557 in Economy class. I confess that, at the time, I thought this decision made a certain amount of sense for this market. Given that Scandinavian passengers expect comfort but not necessarily opulence, there might have been little demand for First class.

That said, Danish travel site check-in.dk reported late last year that these aircraft were flying with up to 200 empty seats. (Link in Danish). While there were a number of factors at play, and Emirates has not cancelled A380 service, I believe they may have gone overboard on capacity with this LOPA. The problem is that it’s not easy (or cheap) to reverse these cabin layouts, which is why airlines are so careful about planning their cabins. Sometimes despite careful study, airlines just get it wrong and have to live with a bad LOPA for a while.

Airbus’ A380 Plus 11-abreast is nowhere near this level of cabin crunch, but perhaps airlines will look for other ways to get the most out of the cabin. No doubt, Airbus will be open to discussing it. This is a design proposal, after all.

One last note: Airbus has hinted at an Airspace by Airbus announcement this week, and I’m looking forward to that.

But the real airspace question is something that may help the A380 out of this momentary drop in demand.

There is a lot of room for smaller aircraft to address the needs of shorter routes, creating better and more convenient flight connections between secondary airports. But the connections between large hubs at long distances may need to be served by large and very large aircraft as passenger numbers grow over the next 20 years.

I really cannot see our current (or future) air-traffic control dealing comfortably with twice as many planes in the skies. Nor can I see major airports coping with demand for more slots for smaller aircraft.

I think Airbus is right that the A380 has an important role to play in the future of aviation. Now, we just need to see whether airlines agree.