Norwegian has announced a new twist to its Norwegian Reward loyalty program which will give the airline’s most frequent fliers an opportunity to earn free return long-haul flights and Premium upgrades.

Norwegian Reward is free-to-join and gives members the chance to earn rewards and CashPoints which can be applied to discounted and free Norwegian flights.

Norwegian Reward members who fly at least 20 round trips (40 one way flights) and have at least 3000 CashPoints earned on flight tickets by 31 December 2017 will receive a free return flight to any one of Norwegian’s 13 long-haul destinations from Gatwick.

Flights are redeemable in January 2018 with a valid travel period throughout 2018.

The loyalty programme is also offering members who fly at least 10 round trips (20 one way flights) on flexible tickets in 2017 a free upgrade to Premium on any long-haul route.

Premium class offers a roomy cradle seat with more than a metre of legroom, complimentary meals and drinks and free lounge access at select airports, including Gatwick.

Qualifying members who have earned the reward can book the lowest available economy fares for long-haul travel at during 2018 and upgrade to Premium free of charge.

“There has never been a better time to be a Norwegian Reward member as we’re now giving away free long-haul flights and Premium upgrades to our most loyal customers.

“Our members have easier access to discounted and free flights through a range of new partners which reflects the robust growth in our UK membership that has increased more than 50 per cent in the past year alone.

“Now our most frequent fliers can fly Norwegian to their long-haul destination of choice and enjoy high quality comfort in economy or Premium on the 787 Dreamliner entirely for free.”

Norwegian Reward will also give members the opportunity to combine the free long-haul ticket and Premium upgrade if they qualify.

The loyalty scheme has recently launched the new Reward Family Account, giving groups of up to seven people the chance to pool CashPoints together, and the Reward eShop where members can do online shopping at Britain’s most popular retailers and earn CashPoints.

The free long-haul flights and upgrades awards have a few restrictions.

The travel period for the free long-haul ticket and Premium upgrade is the entire year of 2018, except for the following dates:

The free ticket is personal and may only be used by the Reward member/customer who earned it.

The ticket is a round trip LowFare+ ticket to any of Norwegian’s destinations and includes seat reservation and luggage. Meals are also included on long haul flights.

The trip must start and end at the same airport in the country in which the member resides.

Norwegian in the UK

Norwegian is the third largest airline at London Gatwick, with 4.6 million yearly passengers, and with more than 800 UK-based pilots and cabin crew.

In 2014, Norwegian introduced the UK’s first low-cost, long haul flights to the U.S. — the airline now flies to 7 U.S destinations. 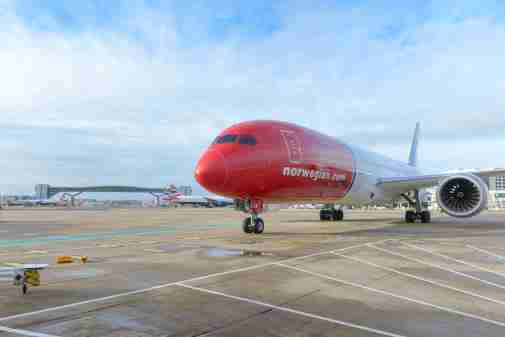