“IT WAS A VERY GOOD YEAR”

ACI EUROPE released its traffic report for December, Q4, H2 and Full Year 2017 this week. It is the only air transport report which includes all types of airline passenger flights to, from and within Europe: full service, low cost, charter and others.

Passenger traffic across the European airport network grew by +8.5% in 2017.

Both the return of a growth dynamic in the non-EU market and the continued expansion of passenger volumes in the EU contributed to this exceptional performance.

Passenger traffic at non-EU airports posted an average increase of +11.4% (compared to a decrease of -0.9% in 2016), with Russian and Turkish airports enjoying a bounce back. Airports in Georgia, Ukraine, Moldova and Iceland grew in excess of +20% on average.

Meanwhile, EU airports saw passenger traffic increasing by +7.7%, a further improvement over 2016 (+6.7%). The highest growth was achieved by airports in East and South of the EU – with airports in Latvia, Estonia, Poland, the Czech Republic, Slovakia, Hungary, Croatia, Slovenia, Romania, Bulgaria, Cyprus, Malta and Portugal recording double digit growth. This reflects a catching-up pattern in terms lower propensity to fly in most of these countries when compared to the Western and Northern parts of the EU, along with more dynamic local economies.

“2017 marks the best year for European airports since 2004, when air traffic was boosted by the accession of 10 countries to the EU – the single largest expansion of the bloc. That parallel is quite something when you consider the current climate includes Brexit and all its uncertainties.”

He added: “This performance comes on top of several years of dynamic growth and shows that demand for air transport keeps outperforming the economy and defying geopolitical risks – for now. It is quite impressive to see that even in the more mature EU market, passenger traffic since 2012 has increased by close to +30%. Such significant growth is putting much pressure on airport facilities and staff with more and more airports now reaching their capacity limits – especially during peak hours.”

Aircraft movements increased by +3.8%, on the back of continued airline capacity expansion. 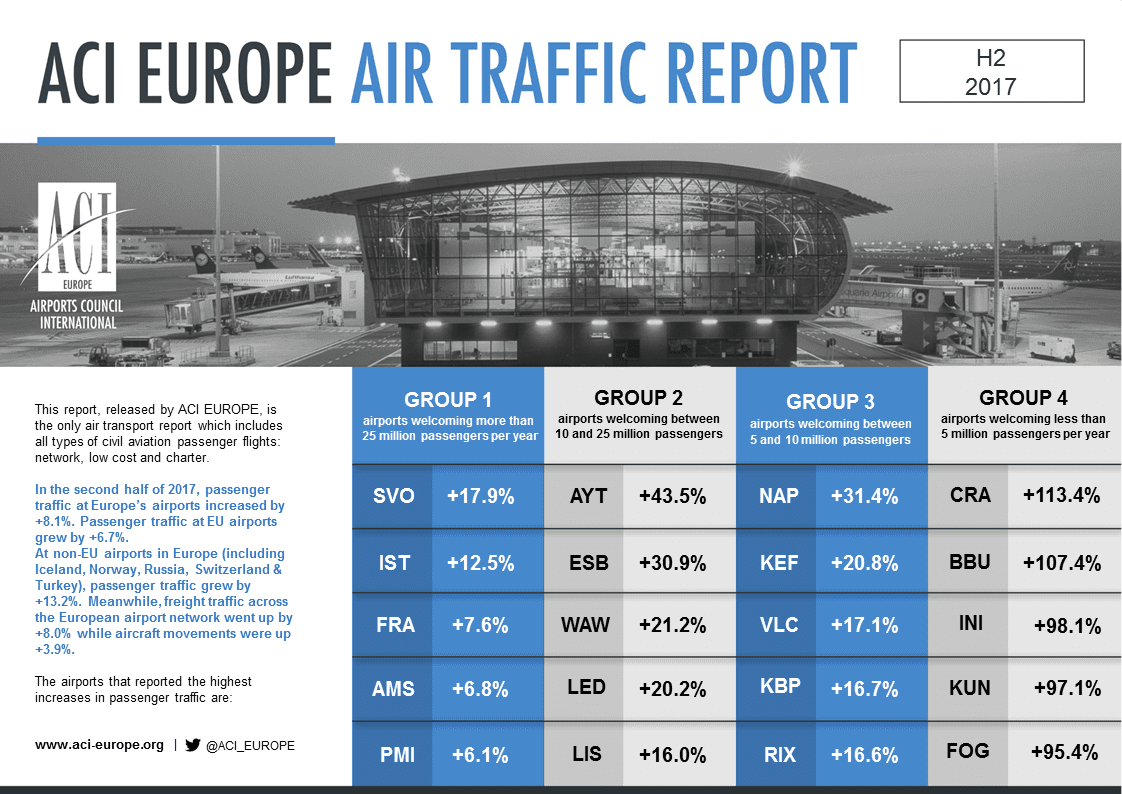 The top 5 European airports (‘the Majors’) saw passenger traffic growing by +5.5% in 2017 – collectively welcoming an additional 18 million additional passengers. This significantly improved performance compared to the preceding year (+1.5% in 2016) reflects both the continued expansion of Low Cost Carriers (LCCs) in primary markets and the better fortunes of these airports’ hub carriers.

THE FAST & THE FURIOUS

Passenger traffic growth moderated in Q4 (+6.9%) and December (+5%) as result of airline-related disruptions, especially the demise of Monarch and Air Berlin as well as the decision of Ryanair to slow down its growth to solve its crew rostering issues.

WHITHER 2018?
Looking ahead to airport performance this year, Jankovec commented:

“This might be as good as it gets and while we anticipate continued growth in the coming months, it will most certainly come at a slower pace. The good news is that the European economy and the Eurozone in particular are set for further expansion – with economic sentiment now close to a 17-year high.

“But on the flip side, rising oil prices are affecting airlines and consolidation is now placing more market share with a handful of powerful airline groups. Couple that with the fast-approaching Brexit deadline on the horizon and it’s not hard to see why Europe’s airports can expect the temperature to rise, as airlines get even choosier about where they maintain existing capacity or open new routes.”

The airports which reported the highest increases in passenger traffic during 2017 (compared with 2016) are as follows:

The airports which reported the highest increases in passenger traffic during December 2017 (compared with December 2016) are as follows: