Even as the Brexit strategy for UK aviation remains unclear, Norwegian has commited to their model, with London as a bridge to the Americas and to Asia.

Norwegian CEO Bjorn Kjos today delivered an address in London to outline his global expansion plans for the world’s best low-cost long-haul airline, as the UK grows to become one of the carrier’s most important markets.

The airline’s CEO, Bjorn Kjos, one of the founding partners of Norwegian in 2002, addressed UK media at The Shard in central London and explained the growing importance of the UK market and the airline’s strategic plans.

Europe’s third largest low-cost airline has led the market in low-cost long-haul travel since first launching transatlantic services from London Gatwick to the USA in 2014. Norwegian has since flown more than 2 million passengers on its transatlantic routes at London Gatwick.

The airline flew more than 5.1 million UK passengers in 2017 and will shortly commence a series of new long-haul routes using Boeing 787 Dreamliner aircraft, including the UK’s first low-cost flights to South America (14 February), and new direct services to Chicago and Austin in March.

Norwegian will continue to pursue further route expansion from London to South America and Asia. The airline is exploring potential new routes to more South American countries due to strong ticket sales on the Buenos Aires route.

Further Asia expansion will build upon the successful launch of the world’s longest low-cost route to Singapore with destinations such as Tokyo, Shanghai and Beijing planned if the airline receives access to the Siberian corridor. The Siberian corridor gives Norwegian the most efficient and direct routing across Russia to the Far East.

Norwegian’s first Airbus aircraft to fly UK intercontinental services from 2020 – Eight brand-new Airbus A321neo LR will land in Norwegian’s fleet in 2019 and will serve the UK from 2020. The A321neo LR will be Norwegian’s first Airbus aircraft to fly in its fleet as plans are underway to use these aircraft from London to the US East Coast and Midwest. Cities such as Detroit, Philadelphia and Minneapolis are examples of destinations that could be served. Norwegian will also consider routes to the Middle East using the Airbus A321neo LR.

The airline will exclusively launch its newest long-haul routes at London Gatwick before anywhere else on its network. 10-brand new Dreamliners entering the fleet in 2018, will feature the new expanded 56-seat Premium cabin, which will replace the current Gatwick-based Dreamliner fleet, giving UK passengers more premium seats and brand-new aircraft at less than a year old. Long-haul Wi-Fi will be rolled out from the end of this year on the Boeing 787 Dreamliner and Boeing 737 MAX aircraft with plans to offer a free Wi-Fi option and a paid high-speed option, fast enough to stream movies and TV shows.

Norwegian is investing in enhancements to its long-haul services that will provide a stronger proposition to business passengers. While the airline will add 21 more Premium seats to its 787 Dreamliners, with lounge access included with Premium tickets, Norwegian also has plans to increase frequency on key routes from Gatwick to give business customers more flexibility.

London-Buenos Aires will increase to a daily service this winter, while further increases to Los Angeles from nine to 11 flights per week and an increase from two to four weekly flights to
Fort Lauderdale (Miami), are also planned. Norwegian also has long-term ambitions to secure slots for a triple-daily Gatwick-New York service.

From tomorrow, Norwegian begins the first ever low-cost route from the UK to South America which will break the monopoly on flights between London and Buenos Aires. The airline also plans to give UK passengers onward connections to cities around Argentina and Latin America as it prepares to launch new domestic services in the country after receiving an Air Operator’s Certificate from the Argentine authorities. 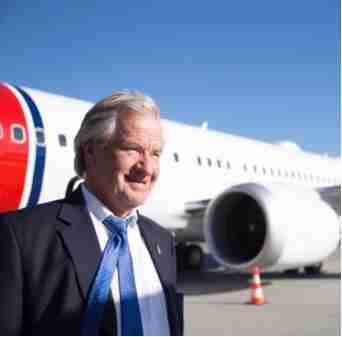 “The UK will be at the heart of our continued global expansion and we remain fully committed to the market.

“We are launching long-haul routes exclusively from London Gatwick, introducing our newest Dreamliners to Gatwick and increasing frequency on popular routes which reflects the growing importance of the UK to the future of our business.

“UK passengers will be the first to benefit from our newest routes and upgraded long-haul passenger experience. With plans to rollout inflight Wi-Fi on our long-haul flights, Norwegian will be in a better position to increasingly target business passengers as we also have plans for more exciting routes and flights to the USA, South America and Asia.

“With huge global ambitions, we’re confident that the UK can offer Norwegian a springboard to further expansion as we aim to become the long-haul airline of choice for passengers seeking a high-quality service at great value.”

Norwegian in the UK: