Iberia’s first A350-900 aircraft has advanced to the final assembly stage at the Airbus factory in Toulouse, France.

The wings have been attached to the fuselage and the vertical stabilisers are currently being installed. The first electric system tests are also being carried out.

The manufacturer will next conduct a number of ground tests before installing the full cockpit and passenger cabin, installing the engines and painting the fuselage. Additional flight tests will follow before the aircraft advances to the Airbus Delivery Center for handover around June of this year.

Iberia operates an all-Airbus fleet and has a total of 16 A350-900 aircraft on order, which will operate long-haul routes.

The Iberia A350 Experience

While we wait for the final delivery date to be confirmed, the airline has already given us a good view of what to expect onboard during the FITUR travel trade fair in Madrid this January.

The aircraft will offer all passengers high-speed Wi-Fi, an improved in-flight entertainment system with touch-sensitive display screens, higher ceilings, more space for hand luggage, and an advanced air circulation system, larger windows letting in more light, and better cabin noise reduction among other of the cabin environment upgrades offered by this model of aircraft. 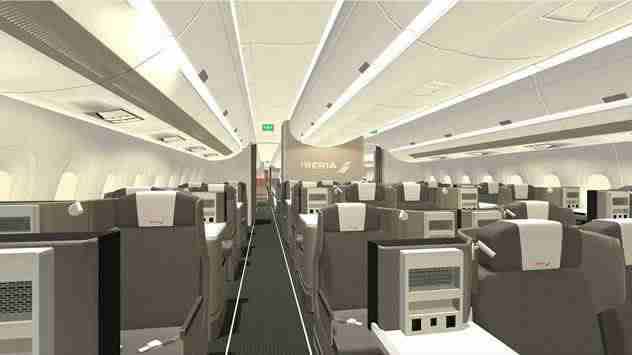 Business Class seats on the A350-900 are wider: 58 cm instead of 52.5cm, and feature wider footrests, side protectors and more space for storing belongings. The seats also feature 18” in-flight entertainmnet display screens.