Norwegian Airlines has become the top international carrier serving New York by passenger numbers, according to traffic figures published by the Port Authority of New York and New Jersey.

Though Norwegian’s lead against British Airways is slight for now, the numbers take on specal significance when compared to the traffic numbers for full-service airlines serving other large international gateways like Emirates, Lufthansa and Air France.

The transatlantic market is highly competitive and has been until recently dominated by those revered flagships. Because of the desirable business traffic to New York, routes accross the pond have enjoyed introduction of new product innovations like lie-flat seats and even Concorde service.

Norwegian’s meteoric rise since launching service to New York in 2013 shows that low-cost long-haul service can sway passengers. It also shows that passengers may not mind landing at an airport that is a bit further away if onward transport is still convenient and the fare is attractive.

The airline offers both an economy and a Premium economy cabin on these routes and also operates Boeing 787 Dreamliners on this route, for an enhanced cabin experience. Premium passengers have meals meals and beverages included in the price of their ticket, as well as a more generous luggage allowance, recliner seats and up to 46” of legroom. Fast Track security and lounge access, is also offered to passengers flying out of select airports. 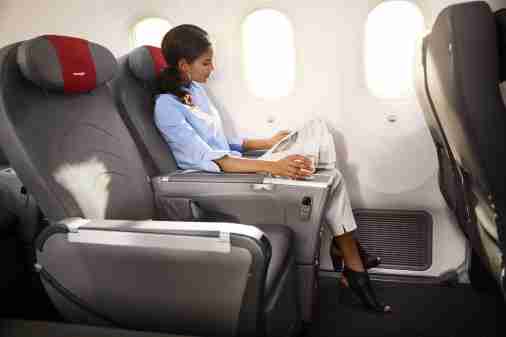 “Data on passenger numbers released by the Port Authority New York and New Jersey truly emphasizes the strong demand for more affordable international fares, and we are excited that Norwegian flew more customers to and from New York than any other non-North American airline in the 12 months to July 2018,” said Norwegian CEO and Founder, Bjørn Kjos.

“Since our first flight to New York back in 2013, we have continued to exponentially grow our route network, delivering the award-winning combination of affordable fares and friendly service that Norwegian is known for. Our 16 routes from New York City is just a start; we see room for further expansion and will continue to increase our passenger numbers in our mission to both make travel more attainable and stimulate the local economy,” Kjos added.

The ICCT also recently named Norwegian as the most eco-friendly choice for flying accross the Atlantic, in large part because of its LOPA cabin density, high load factors, and newer, more fuel-efficient aircraft.