Marisa Garcia Leave a Comment on In Dire Times, Copenhagen Airport Calls For Uniform Rules For Return To Service

Copenhagen Airport is asking for uniformity in rules governing the restoration of air services, within Europe and abroad, as it faces historic lows in operations.

In its latest update, Copenhagen Airport emphasized, “The aviation industry is fighting for its life.” Adding, “The work being done to restart global aviation and to ensure safe and secure operations on a large scale is crucial if Denmark is to maintain tourism and good connectivity with the rest of the world once the coronavirus pandemic subsides.”

Copenhagen Airport is reporting a daily average of 865 passengers during the month of April—which represents a 99% drop compared to April of last year. In all, the airport served 25,936 in April 2020 versus the 2.5 million air travellers in April 2019. The low point for the month came on Thursday, 9 April, when only 424 passengers went through the terminals. The airport has not had a slow day like this since 1946, the first year of peace after World War II. That year, the airport had an average of 630 passengers a day. 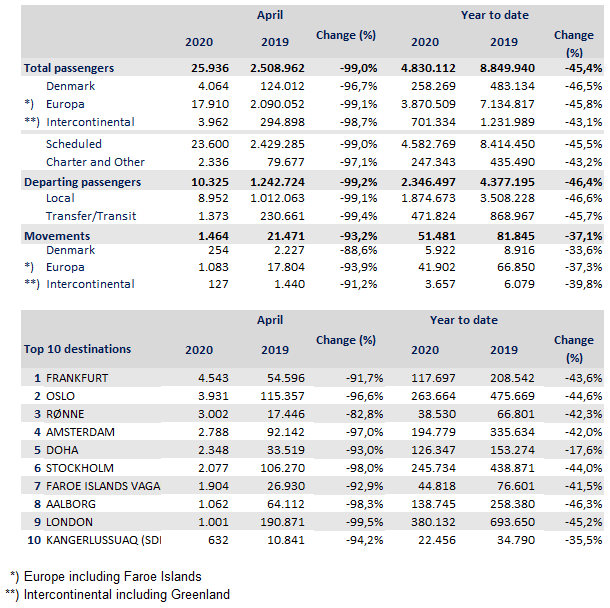 This is a historic low, with the exception of the few days of airport closure in April 2010, when an ash cloud from Iceland’s Eyjafjallajökull volcano wreaked havoc on aviation.

“Both globally and in Denmark, this is the worst crisis for the aviation industry since World War II,” says Copenhagen Airport CEO Thomas Woldbye. “However, we also know that the crisis will eventually pass once a treatment is found hopefully before too long and subsequently a vaccine against the coronavirus. If Denmark is to have a strong international airport also in the future, we need to start planning now for a safe and secure reopening of regional and global aviation.”

From 750 to 25 daily arrivals and departures

Under normal operating conditions, there are some 750 arrivals and departures daily at Copenhagen Airport. Today, there are just 25 to and from very few destinations, including Bornholm (domestic), Oslo, Stockholm, Frankfurt, Amsterdam, Doha, Vagar (Faroe Islands) and Kangerlussuaq (Greenland).

The current top 10 of destinations features destinations that have never made the list before: Greenland, the Faroes and Bornholm.

“Although the crisis has knocked the bottom out of the aviation industry and the sources of income have vanished, Copenhagen Airport remains open for the very few passenger planes still operating and, not least, for the vital air cargo traffic carrying medicines and personal protective equipment. Staying open is very costly, and although CPH has suspended projects and cut costs by close to a billion Danish kroner, the situation remains critical,” Woldbye says.

Woldbye believes that it is anybody’s guess when the numbers of routes and flights will begin to rise again.

“One thing is certain: we will not see anything that even resembles normal conditions in 2020,” he said. “Based on the current situation, we will not see even a gradual return to normal until some point in 2021. When we’ll be back at last year’s level of 30 million travellers is just impossible to say.”

Uniform rules for a safe reopening of air traffic

As governments prepare for the lifting of restrictions on movement, they must make an effort to set uniform rules and regulations governing travel.

The authorities, government ministries, trade organisations, airports and airlines in both Denmark and the EU are currently exploring how to implement a long-term transition phase to safeguard passenger health and safety when reopening for large-scale air travel.

“It is still not all clear which initiatives will work. But it’s crucial that we get international guidelines for air travel. If that is not possible right away, we will need to have robust national and bilateral rules and guidelines,” Woldbye said. “Once the national borders reopen, there will be a demand and a real appetite for leisure and business travel. However, safety and security will be the be-all or end-all, both for travellers and for the employees of the airlines and the many businesses operating at the airport.”

Woldbye emphasised the importance of coordinating the rules and initiatives when reopening, initially within the EU and between the Nordic countries. In this context, the international airport industry organisation, the Airports Council International (ACI), will play a central role.

“Obviously, it’s no use if we have 28 EU countries setting out 28 different sets of rules relating to social distancing, hygiene, PPEs and so on. That would only create confusion – and therefore a sense of insecurity. If we are to have an actual reopening of commercial air traffic, we will need uniform, international standards for handling passengers, both at the airports and onboard aircraft,” says Woldbye.

Important to kickstart travel and tourism

The Danish aviation industry is preparing a comprehensive presentation to the Government and the Danish Parliament on how to open both business travel and tourism.

“CPH’s goal is to retain our position as northern Europe’s most important hub and to restore the best possible connections to the rest of the world – keeping Denmark connected is our primary objective,” says Thomas Woldbye: “We must remember that Denmark entered the corona crisis with a strong economy and a competitive international airport. Now we are through the first part of the Corona crisis. We should use that to rebuild and strengthen Denmark’s position. We can save and earn billions by restoring tourism and access to travel quickly.”