Qantas has revealed its next generation Premium Economy seat, a custom-designed Thompson Aero Seating model, which will debut on the airline’s fleet of Boeing 787-9 Dreamliner aircraft.

“The Qantas Dreamliner will by flying some of the longest routes in the world, including non-stop from Perth to London, so we’ve focused on making each cabin the most comfortable in its class,” said Joyce. “Our Business Suite has been dubbed ‘mini First Class’ by some of our Frequent Flyers and our Economy seat for the Dreamliner has features that some reserve for Premium Economy. This new Premium Economy seat has serious wow factor. You have to experience how well it supports you when you recline to realise it’s completely different from anything else in its class.” 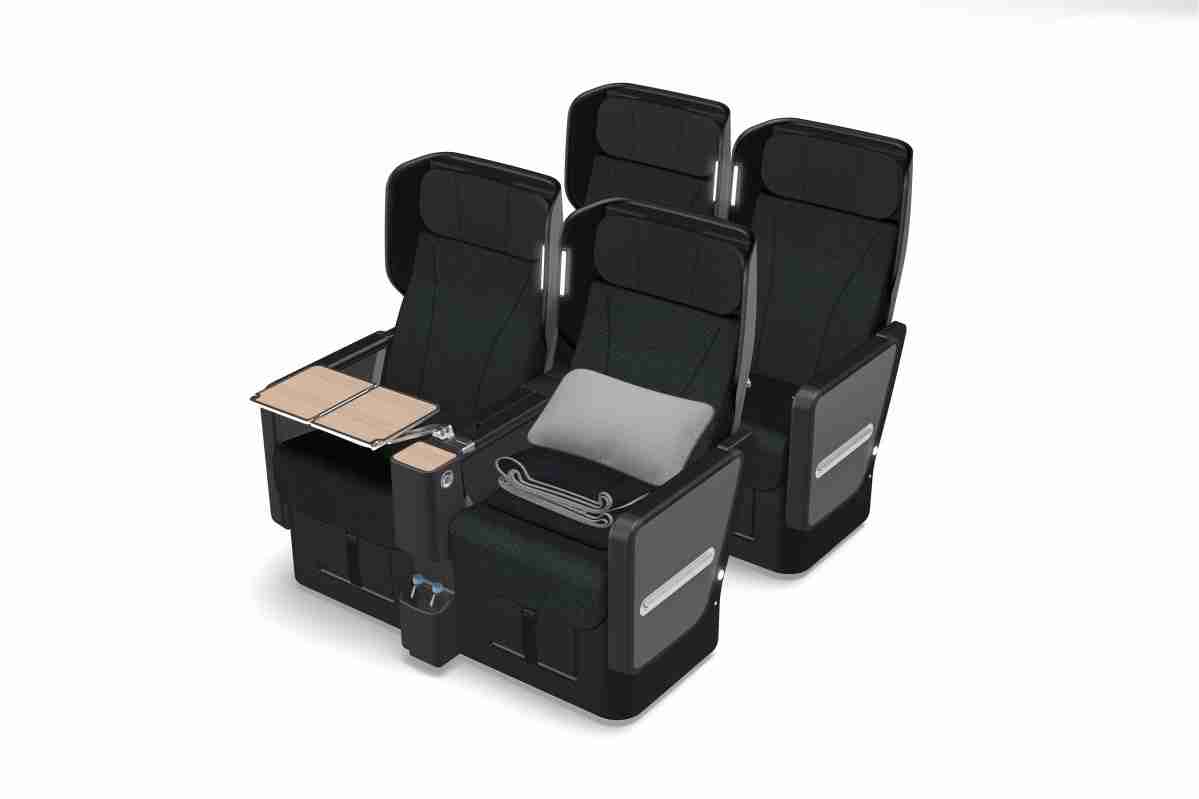 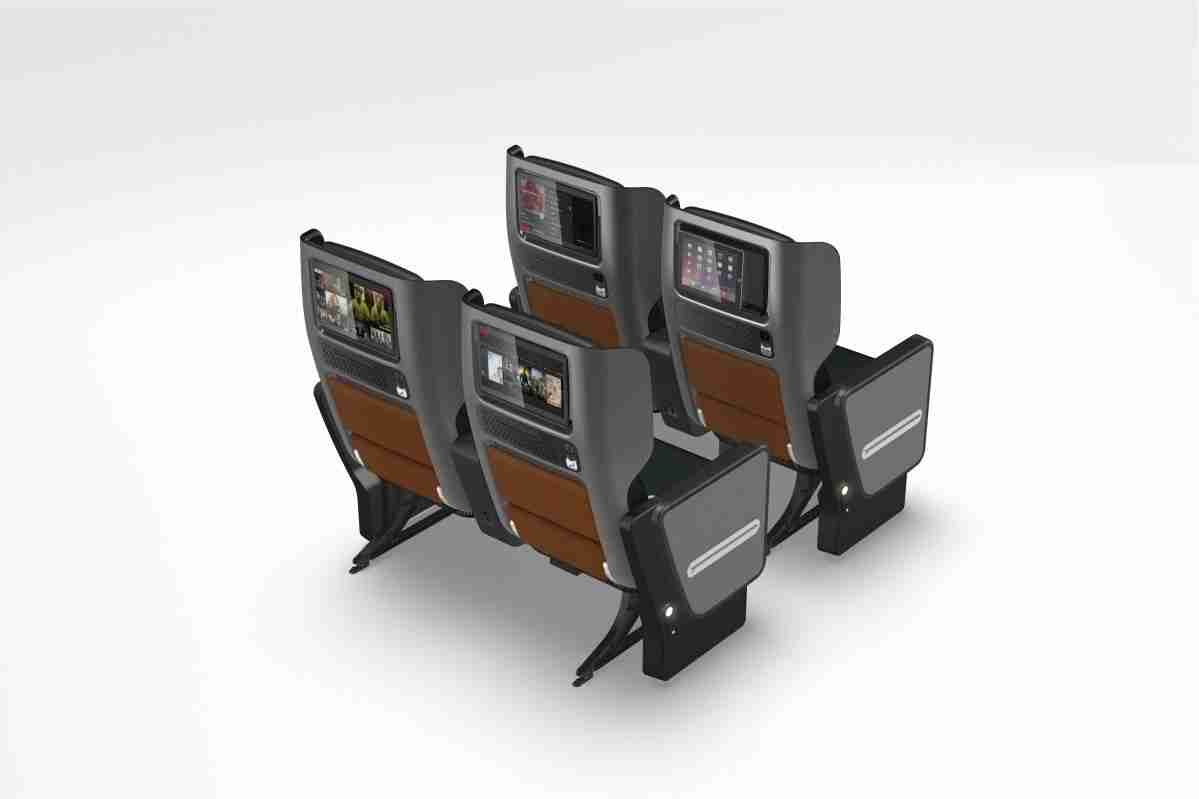 The new Premium Economy seat is based on a prototype by Thompson Aero Seating and heavily customised by leading Australian industrial designer David Caon. 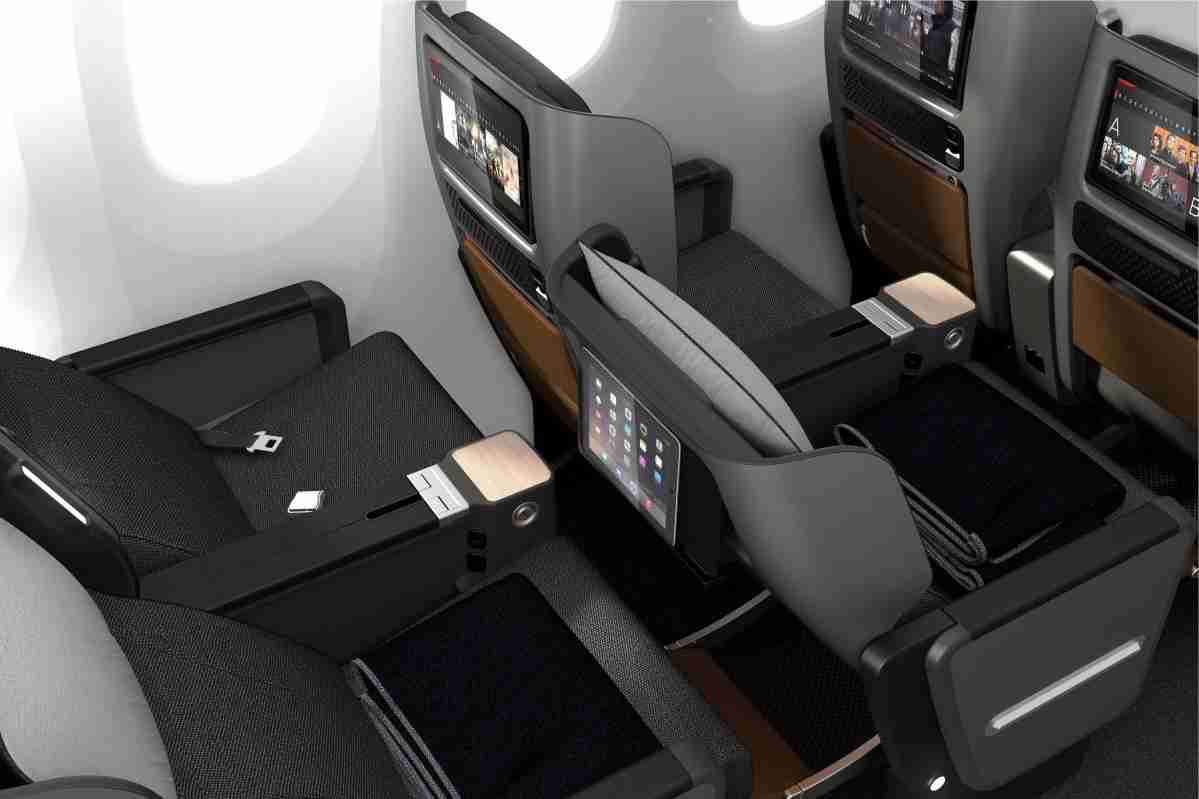 David Caon founded his studio in Sydney, in 2009 and has worked in Milan and Paris where he worked alongside fellow Australian designer Marc Newson, for clients including Dom Pérignon, Samsonite and Qantas – for whom he worked on the interiors of the airline’s Airbus A380. Caon was also responsible for refurbishment of the airline’s fleet of Boeing 717s and Boeing 737s as well as the design of some of Qantas’ International lounges including Hong Kong and Singapore. 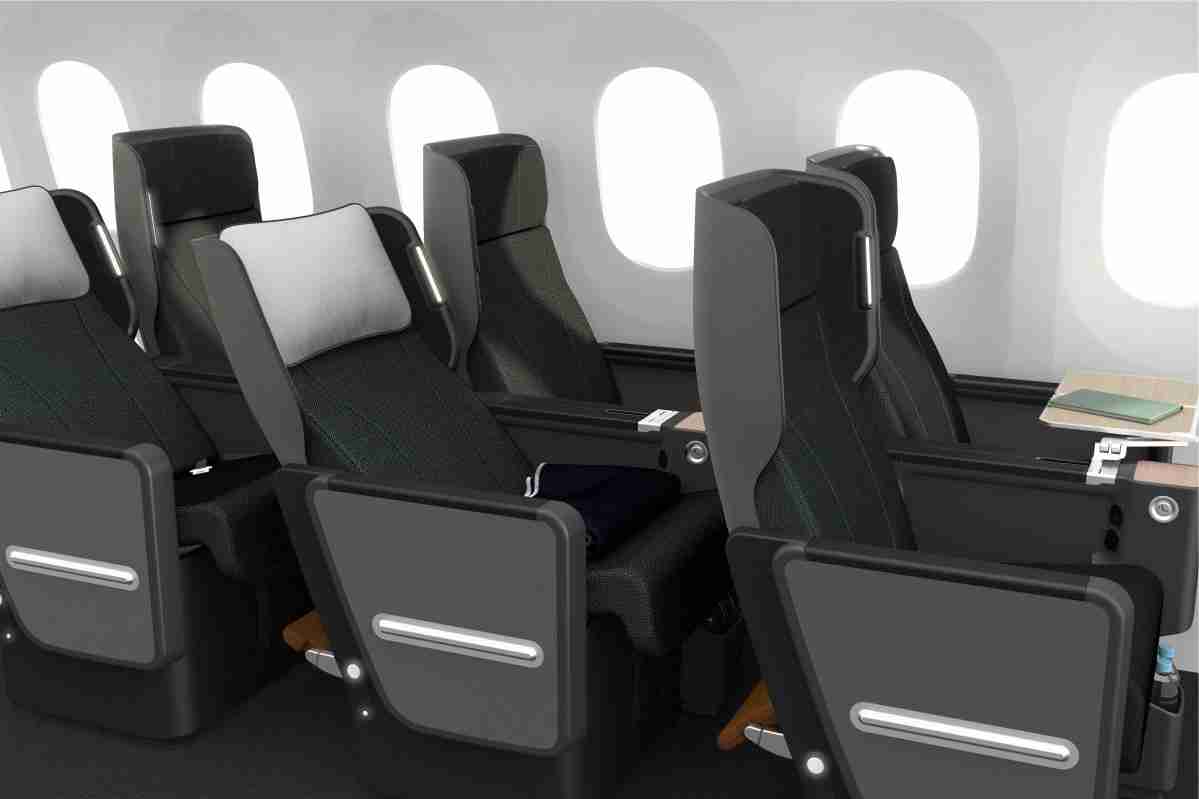 “Developing a new seat comes with its own set of challenges and opportunities. Working with Thompson and Qantas, I think we’ve created a new standard for Premium Economy,” Caon said. “We’ve made sure this seat offers genuine comfort through design elements not seen before on aircraft. There are a number of new bespoke design elements that we hope will really set the benchmark for this class.”

Wider and with more functional space overall, the new seat features a unique recline motion. When the seat is pushed back, several sections shift to support your body as you move into a more relaxing position. 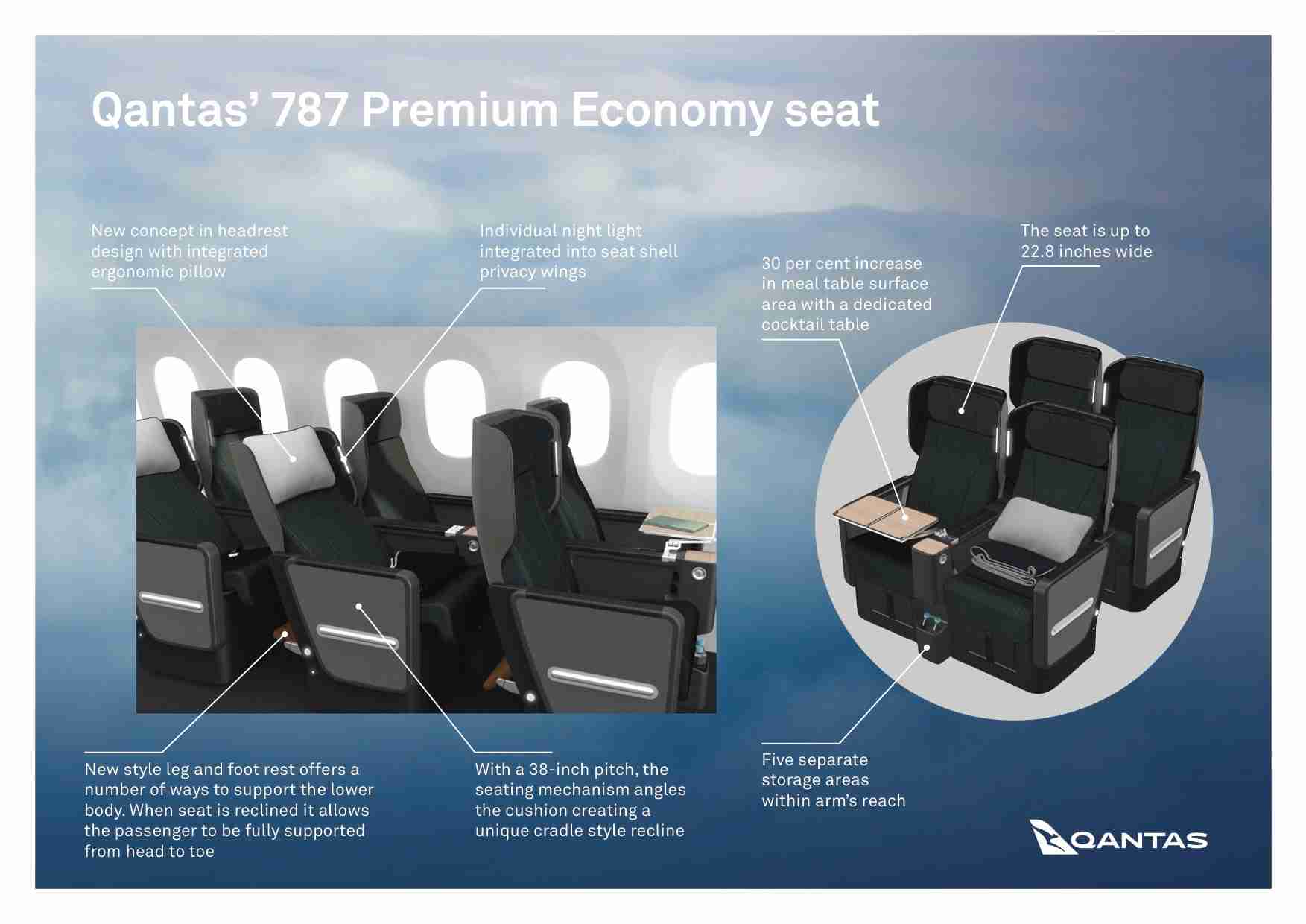 Other key features of Premium Economy on the Qantas Dreamliner include:

Joyce touted the seats as a perfect complement to the passenger-friendly cabin features of the Dreamliner aircraft.

“When you combine these seats with the increased cabin humidity and turbulence reducing technology on the Dreamliner, it makes it an aircraft customers will really enjoy flying on,” said Mr Joyce.

The Qantas Dreamliner will seat 236 passengers across Business, Premium Economy and Economy, which is a lower seat density than many of its competitors. 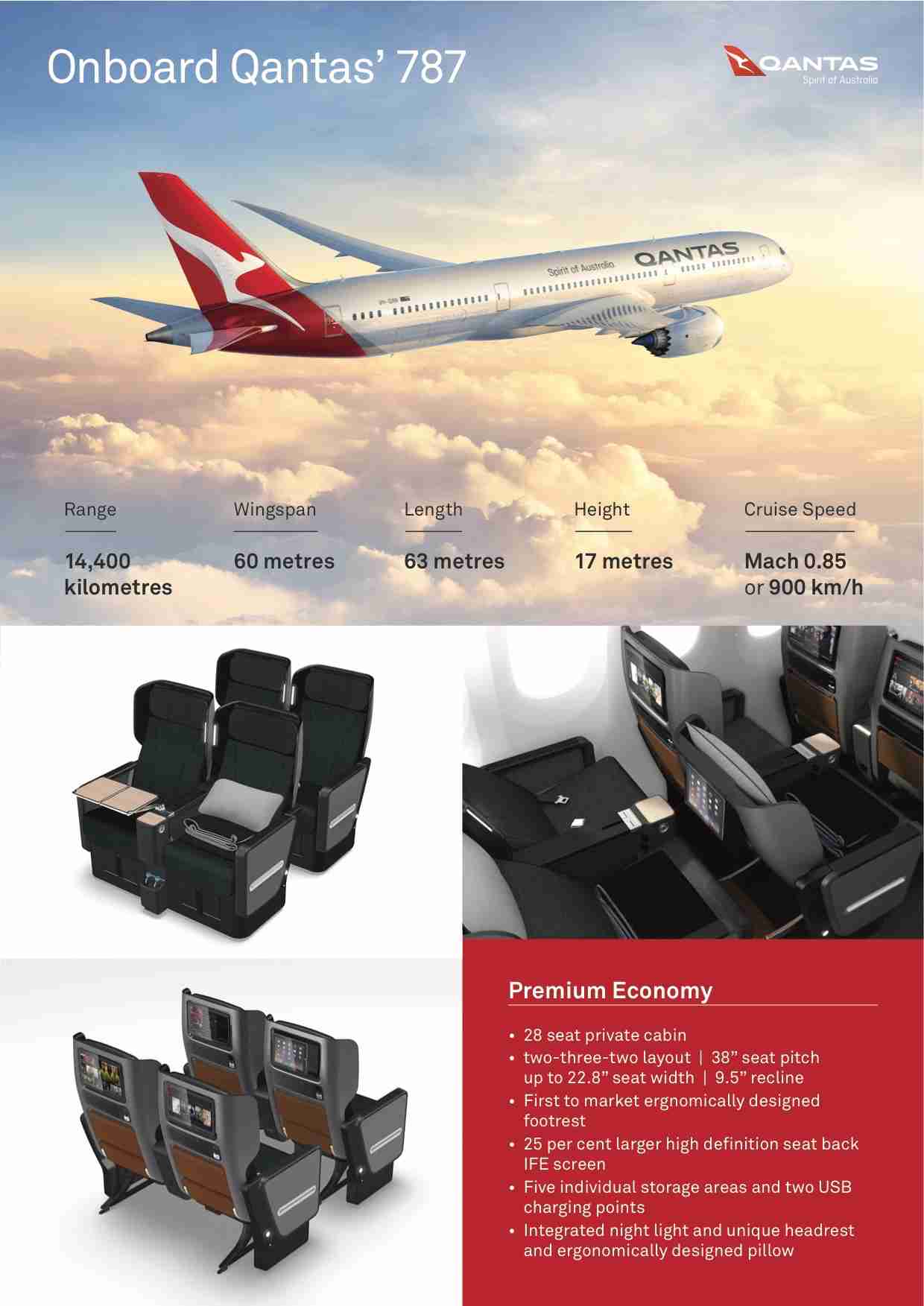 Flights between Perth and London, which will directly link Australia and Europe for the first time, begin in March 2018.

Qantas first introduced Premium Economy on its A380 aircraft in 2008, and later rolled out this cabin class on the Boeing 747.

The airline is currently evaluating whether it will update the existing Premium Economy cabin product in-line with this newer model as part of its fleet planning and product cycles.

The first of eight Dreamliners will be delivered in October this year.